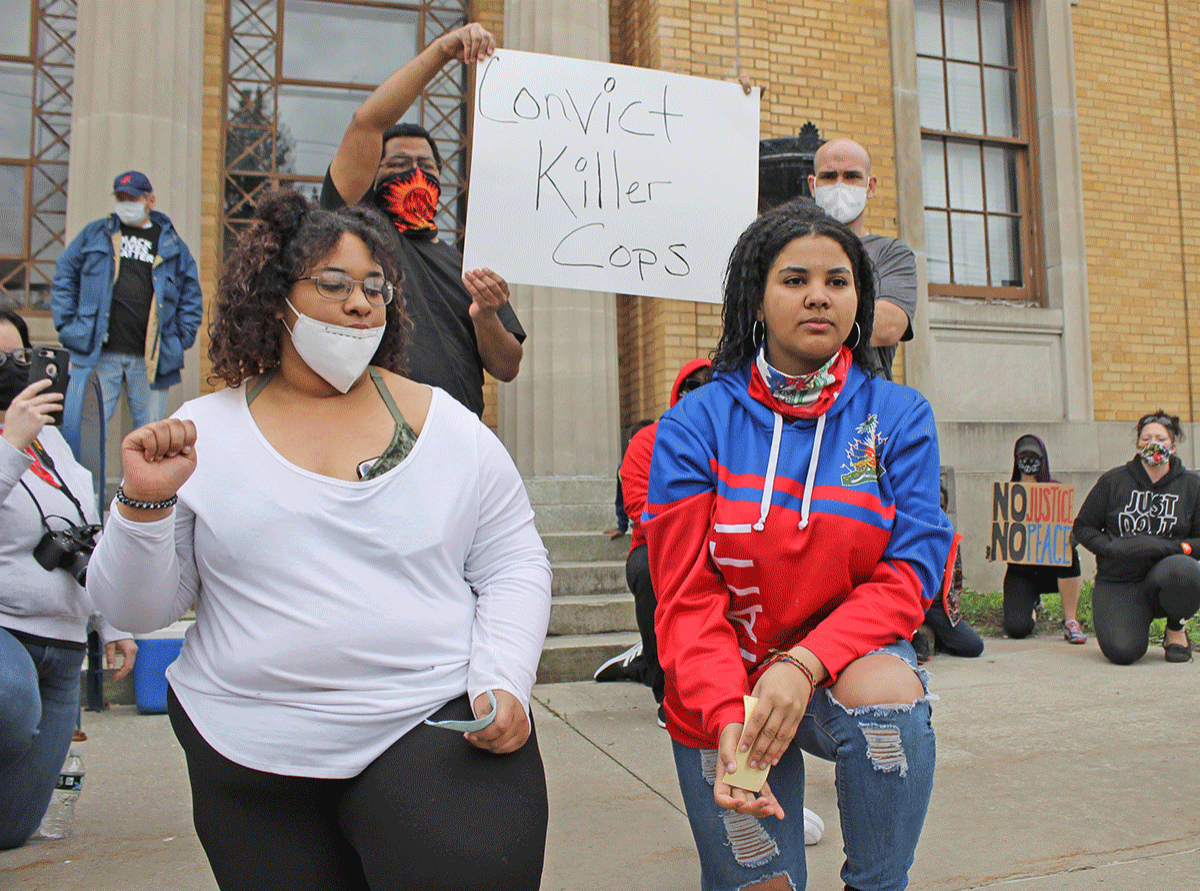 Sisters Olivia Ingram, left, and Alayna Abelard take a knee while reading the names of unarmed Americans of color who have been killed by police in recent years while having done nothing wrong, or being accused of low-level offenses like selling loose cigarettes on the street. The sign being held behind them says 'Convict Killer Cops.' NCNow photo by Andy Gardner.

POTSDAM -- About 100 people gathered downtown on Sunday afternoon to protest racism and police brutality in solidarity with demonstrations happening around the United States and now throughout the world. 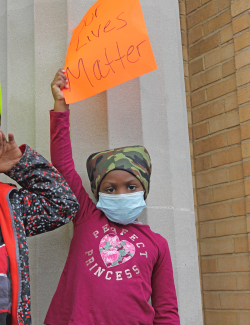 A young protester holds up a sign that says 'Our Lives Matter.' NCNow photo by Andy Gardner.The Potsdam protest, which happened on Elm Street in front of the Post Office, was in response to the killing of George Floyd. The 46-year-old black man died last week after former Minneapolis police officer Derek Chauvin, who is white and was a cop at the time, was filmed using his knee to pin Floyd to the ground for nearly nine minutes while Floyd said “I can’t breathe.”

The Sunday demonstration in Potsdam was organized by two young Potsdam women of color -- Alayna Abelard and Olivia Ingram, who are sisters.

Ingram said she wants the white community to understand the struggles that come along with having dark skin in the North Country.

“Us being colored and going to white schools with many other kids, it’s hard because they don’t accept us for who we are,” she said.

Abelard, who lives in Potsdam, said she and her sister were frequently harassed at Potsdam Central School because they don’t have straight hair, and were called “n----r” by their classmates. They come from an interracial family with a white mother and a black father.

Abelard, like many other people of color, is apprehensive about simple things white locals may take for granted like feeling safe while going for a walk at night. She says she hasn’t had any problems with the Potsdam Police Department, but their presence still makes her anxious.

“They didn’t do anything yet. But I am scared I will be shot or questioned for doing nothing,” she said.

The gathering was peaceful, with no one making attempts to stop people from dropping off mail or passing by. The crowd chanted modern civil rights slogans like “Black lives matter” and “we just want to live.” There were also call-and-response chants like “What was his name?”, “George Floyd!”, “What did he say?”, “I can’t breathe!”

At one point, the entire crowd took a knee while Abelard read aloud the names of unarmed American black men and women who have been killed by police in recent years for either doing nothing or being accused of minor infractions like selling loose cigarettes on the street.

Even with the Potsdam protesters remaining peaceful, the event was highly emotionally charged. Several people of color shared stories about encountering racism here in the North Country.

Among them was a local black man, Yengi Rupert-Lado, who broke into tears while recounting being harassed and threatened by white men in Hannawa Falls, his hometown, when he was just 12 years old. Rupert-Lado said it happened while his group were trying to go for a swim, and it started with the group of white men asking where they were from and if they wanted to buy or sell drugs, and devolved from there. 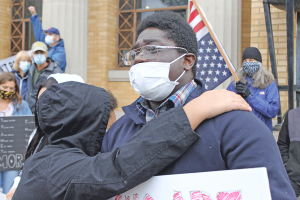 Yengi Rupert-Lado breaks into tears while recounting being harassed and threatened by a group of white men when he was 12 years old while trying to go for a swim in his hometown of Hannawa Falls. NCNow photo by Andy Gardner.

Patrice Cole, who has lived in Potsdam for three decades, said her 22-year-old black son over the summer was walking with three white friends and they were stopped by police in the North Country.

Cole also encouraged people to use their cellphones and document encounters with police. “You can’t hide [racism] like you used to. Use your phones,” she told her fellow activists. Teen Vogue offers a guide on ethically and safely filming police, which can be read here.

Djibril Ba, a Potsdam Post Office worker who immigrated to the United States from Senegal, said he never experienced racism until he moved to this country.

One speaker recalled being on a train in New York City at six years old and said a white women looked at him and said “I hope that n----r doesn't touch me."

There were also several dozen local white people who showed up to protest.

“I think a lot of the problem comes from white people not listening to [black peoples’] experiences and how they feel. It’s our job to listen and learn what they need from us to get justice.”

The protests in response to Floyd’s death are quickly turning into the most significant American civil rights activism since the 1960s. As of Sunday, May 31, international news media have reported protests with attendance in the thousands taking place in England and Germany.

At least two more local demonstrations are planned in St. Lawrence County, both Monday night at 6 p.m. at the Potsdam Post Office and a march starting at Northern Physical Therapy parking lot in Ogdensburg. 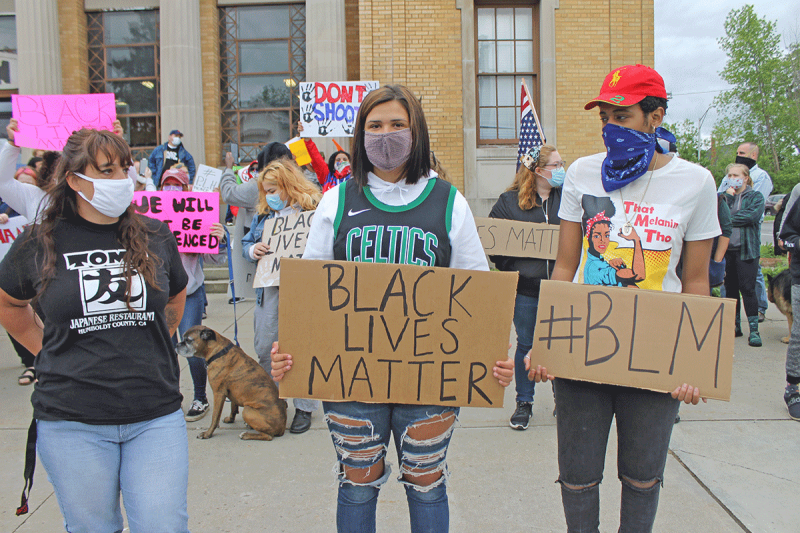 About 100 people gathered to protest the killing of George Floyd, a black Minneapolis man, by a white former police officer who was on duty at the time. NCNow photo by Andy Gardner. 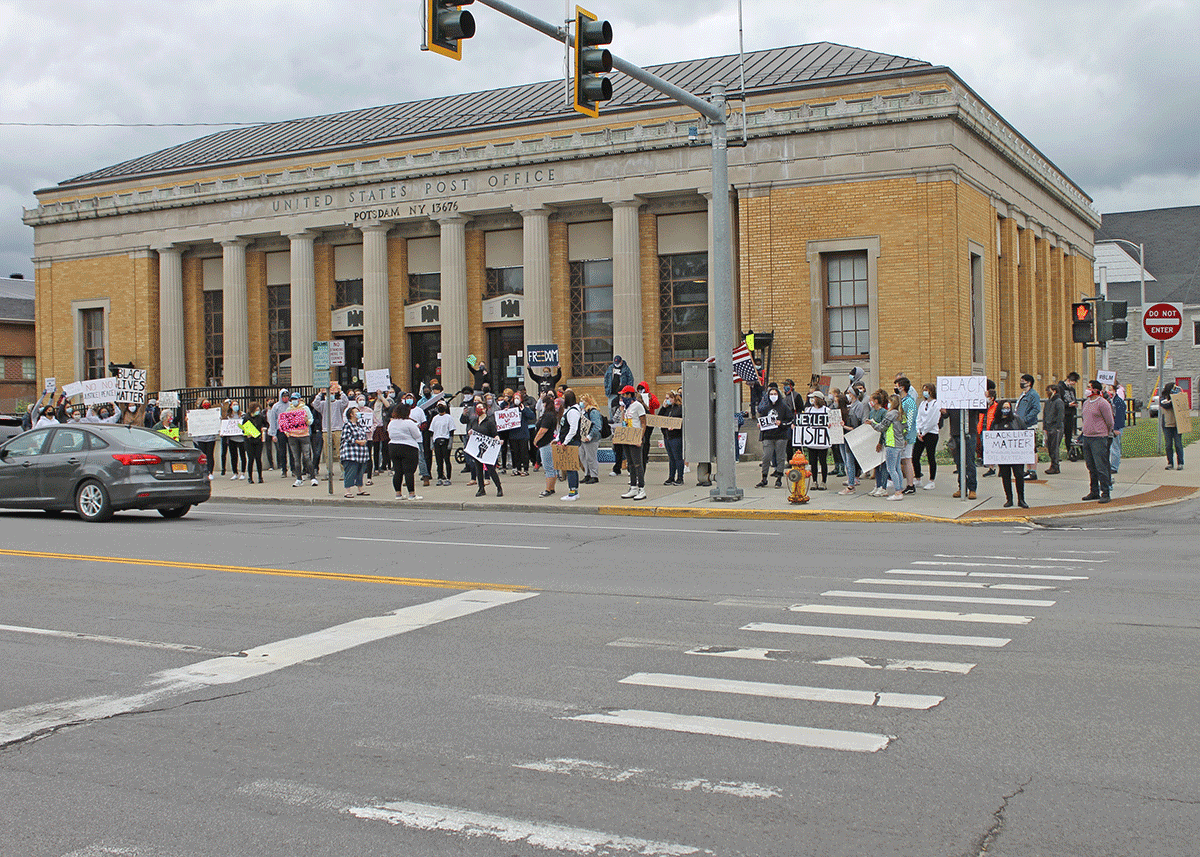 The crowd extended from near IGA around the corner of Elm and Union streets. NCNow photo by Andy Gardner.