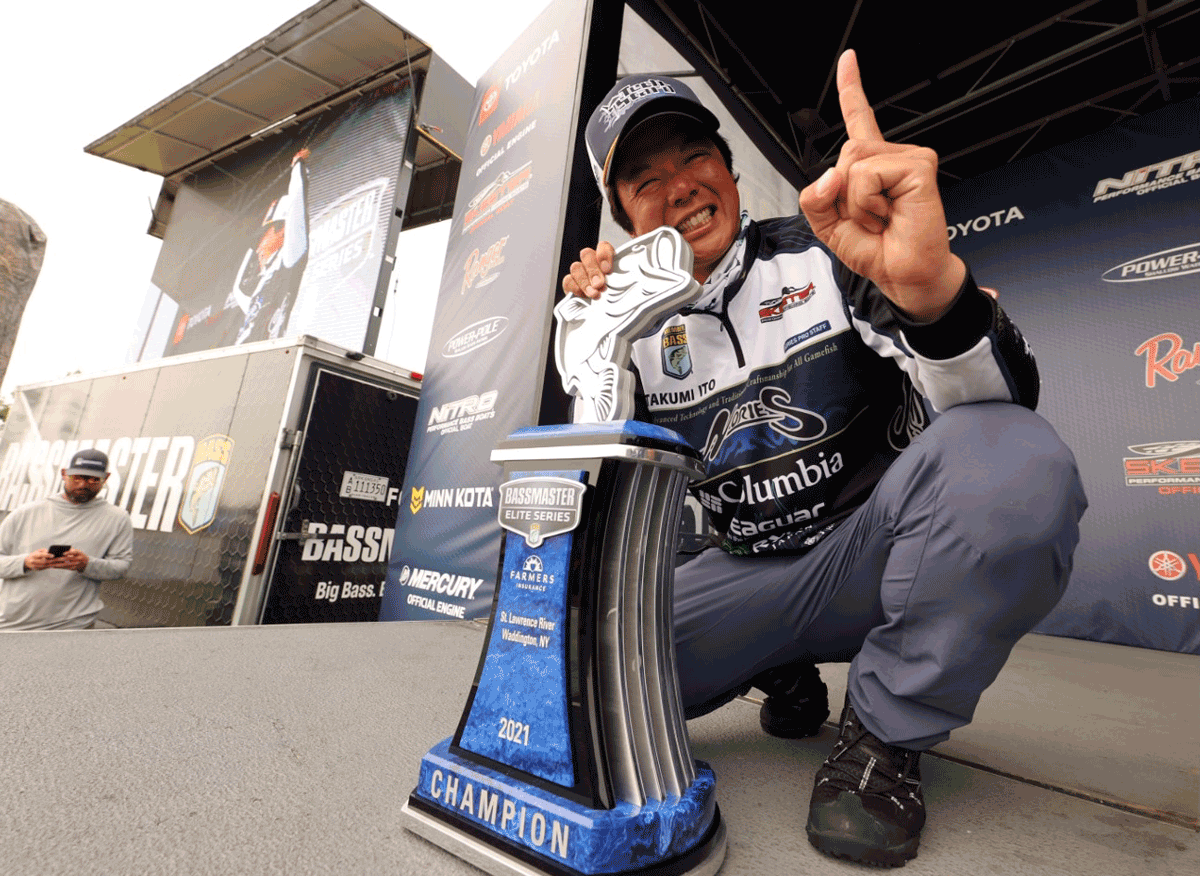 Taku Ito, of Chiba, Japan, has won the 2021 Farmers Insurance Bassmaster Elite at St. Lawrence River with a four-day total of 90 pounds. Photo by Seigo Saito/B.A.S.S.

WADDINGTON — Saving the best for last may not have been his intention, but Taku Ito’s eye-popping 26-pound limit propelled the Japanese sensation to a convincing victory at the Farmers Insurance Bassmaster Elite at St. Lawrence River with a four-day total of 90 pounds.

Hailing from Chiba, Japan, the second-year Elite placed 38th on Day 1 with 17-15, then improved to 11th with a second-round limit of 22-14. Day 3 saw Ito secure his Championship Sunday berth by adding 23-3 and improving to seventh.

Earning $100,000 for his Elite win, Ito anchored his third and fourth days’ limits with 6-pound smallmouth, both of which earned $1,000 daily awards for Phoenix Boats Big Bass.

“I love Waddington — I’m very, very happy,” Ito said with the engaging sincerity Elite audiences have come to love. “When I was 8 years old, I won the (Bassin’s Black Bass with Hank Parker) video game and now, on the St. Lawrence River, I won the Bassmaster Elite Series.

Ito, who placed sixth at last year’s St. Lawrence River event, devoted all four days to Lake Ontario. The first two days, he fished rock structures in approximately 20 feet. On Saturday those areas failed to produce, so he relocated to a spot in 26 to 27 feet near Chaumont Bay.

Calling this spot “Taku Disneyland” for its abundance of fish, Ito caught his Day 3 limit there and started on the spot Sunday.

Arriving at his spot this morning, Ito thought his graph was malfunctioning when he saw what appeared to be a false bottom at 13 to 14 feet. To his delight, it was a massive school of Lake Ontario giants.

“Usually, smallmouth are on the bottom, but today there was a school of big smallmouth suspended,” Ito said.

Ito said he noticed a distinct water clarity difference, and he assumed the fish had followed the clean water into his area. Also, Ito said the gobies he incidentally caught on his drop shot were a couple of inches larger than the 3- to 4-inchers he saw the previous three days.

“My spot had bigger gobies today, so maybe the smallmouth were there for the big gobies,” Ito said.

Ito caught some of his bass on a drop shot with a 4-inch Ecogear Aqua Swim Shrimp rigged on a 1/0 Ryugi Talisman hook with a 1/4-ounce Ryugi TG Delta sinker.

He also caught keepers on a Neko-rigged 5 1/4-inch Nories Latterie straight worm and a Berkley Hit Worm. For this rig, he used a 3/16-ounce Neko weight and a 1/0 Ryugi Talisman hook.

“I was using many Japanese techniques,” Ito said. “I would cast and sometimes the fish would take (the bait) while it was falling. Sometimes, I kept my bait on the bottom for 10 seconds, 15 seconds, with no action.”

Justin Atkins of Florence, Ala., finished second with 88-12. Atkins tied Gerald Swindle of Guntersville, Ala., for eighth place on Day 1 with 21-6, then added 22-14 and rose to fifth. He caught 23-10 on Day 3 and moved into second before settling at that position with Sunday’s limit of 20-14.

“I caught all of my fish out of the lake,” Atkins said. “I found a flat that had some grass and rock with some sand mixed in 12 to 20 feet. There was big school of fish on it, and I was using my Lowrance Active Target to look for them.”

Atkins caught his fish on a drop shot with a Berkley MaxScent Flat Worm and a 3/32-ounce Marabou jig with a piece of MaxScent worm on the shank. That adjustment added bulk and scent appeal, which helped convert more bites into hookups.

“I really liked the brown Marabou jig this week,” Atkins said. “I had some followers on black, but the brown, for whatever reason seemed to get them to trigger.”

Clark Wendlandt of Leander, Texas, finished third with 88-10. On Day 1, the 2020 Bassmaster Elite Series Angler of the Year tied Stetson Blaylock of Benton, Ark., for sixth place with 21-12.

Wendlandt added 23-3 on Day 2 and moved up to fourth. Catching 20-10 on Semifinal Saturday kept him in that spot until his final-round limit of 23-1 advanced Wendlandt one more spot.

“I fished the lake and used a lot of different depths, but the shallowest I caught one was probably 12 feet and the deepest was 28,” Wendlandt said. “The best seemed to be about 20 feet.”

Wendlandt caught his fish on a 3/16-ounce Ned rig and a drop shot with a green pumpkin minnow-style bait.

Bernie Schultz of Gainesville, Fla., who led Days 1 and 2 and finished eighth, won the $1,000 daily Big Bass award for Day 1.