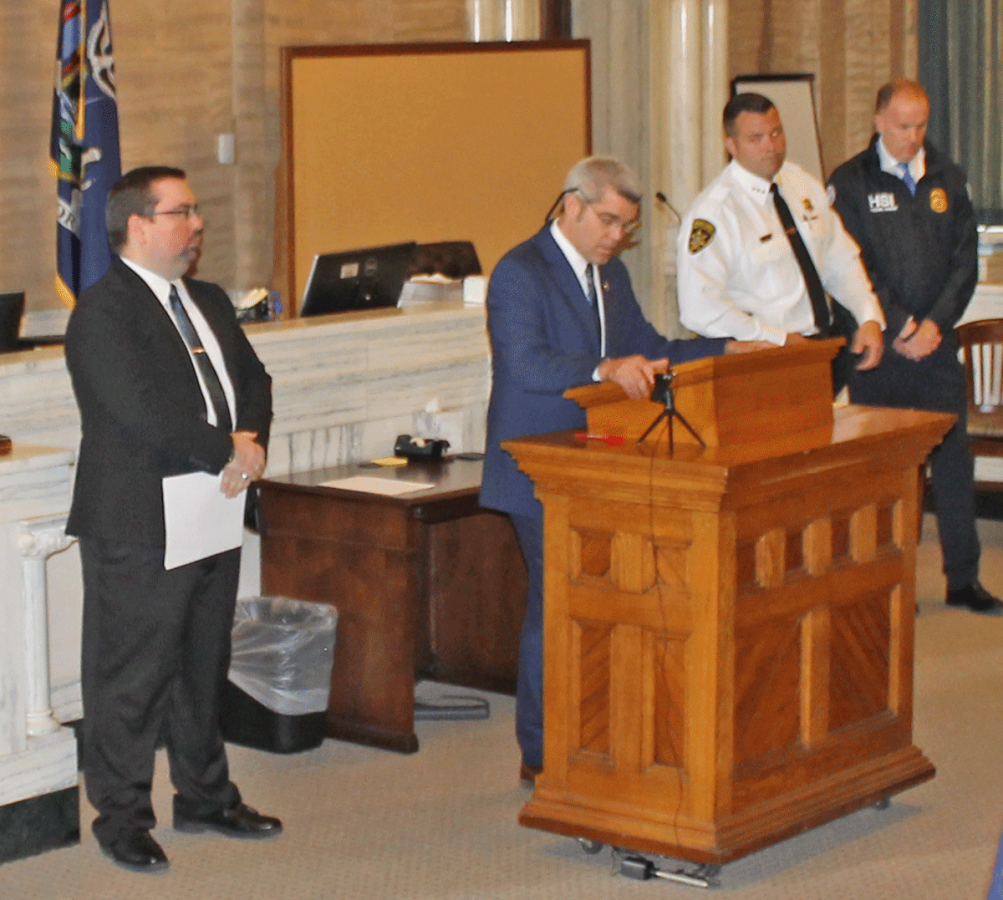 From left, District Attorney Gary Pasqua, Sheriff Brooks Bigwarfe, Undersheriff Sean O'Brien and HSI Special Agent in Charge Kevin Kelly were among over a dozen law enforcement representatives announcing the arrests of 18 people in connection with a drug ring that operated in St. Lawrence County. NCNow photo by Andy Gardner.

He said at 5 a.m. today, Wednesday, May 6, local, state and federal officers raided addresses in Ogdensburg, Potsdam, Massena, Gouverneur and Watertown after months of covert surveillance.

That led to charges against eight St. Lawrence County residents, nine New Jersey residents, and one person from Jefferson County. Police seized six pounds and 12 ounces of cocaine, 279 grams of heroin, 2,737 bags of heroin packaged for sale and $78,000 U.S. currency. Bigwarfe said the total estimated street value of the drugs is around $396,000.

The names will be released later, the sheriff said.

District Attorney Gary Pasqua said his office tried to charging the class A felony of operating as a major trafficker against the Jersey City suspects, who he called "dangerous."

"They were involved in several physical attacks of residents in our county," the DA said. He said the alleged attacks came to light during the investigation and weren't reported to police.

"The things we were seeing were getting too dangerous. We wanted to make sure nobody in this county got hurt," the sheriff said. "The danger element was ramping up too much."

"This is the Bloods, this is the gang everybody reads about in the national news. They are here. We don't want them here," said Undersheriff Sean O'Brien.

DA Pasqua said lesser charges against the out-of-staters would have resulted in appearance tickets under the New York state bail reform.

"This was the only charge, if we could get to it, where we could ask a judge to hold them," Pasqua said.

He said the investigation was a balance of keeping an eye on the suspects and at the same time building a big case with the hope of proving a class A felony distribution charge in court, and then deciding when it's time to pounce.

"Local authorities did a great job of determining when that time was," Pasqua said. "Any decision we make is first and foremost dependent on public safety."

He said none of the St. Lawrence County residents will be held on the charges they were hit with today. Some of that includes first-degree criminal nuisance, which means they are accused of providing a place for the dealers to stay and sell narcotics.

The DA said the arrests were a collaborative effort between local, county, state and federal law enforcement, none of which has the resources on their own to tackle a case like this.

"Having a fully staffed and properly staffed police department in each of our communities is essential," he said.

Speakers at the press conference announcing the arrests said the defendants took advantage of the COVID-19 pandemic.

"We're in a COVID health crisis. These subjects took advantage of that," Bigwarfe said. "They didn't stop, They obviously expanded their operation. It's a deplorable act."

He also pointed out that the illegal drug problem in St. Lawrence County is no longer limited to the larger communities.

"It's just not a Massena problem or Ogdensburg problem. That's in the past. It's a St. Lawrence County problem," he said. "This just isn't going to be tolerated in our county. This is not a one-off event.

"If you come from another state or another area to sling your illegal drugs, we will seek you out."

Officials said the case is ongoing and more arrests are pending.