POTSDAM – A father whose son took his life following an extortion attempt on Facebook last week is making it his mission to warn parents and kids of the dangers of social media. 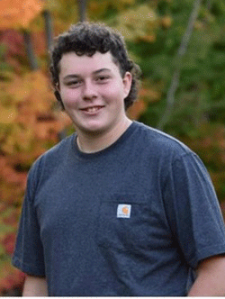 Riley Basford, 15, killed himself March 30 after being told online that embarrassing photos of him would be circulated to his friends and throughout the internet unless he paid $3,500, said his father, Darren Basford.

“My young sweet boy was cyberbullied by some very sick individuals on Facebook,” he said. “I am going through one of the worst things a parent can go through.”

By all accounts, the Potsdam High School student was an outgoing, active boy with an infectious smile who enjoyed hunting, fishing, sports and snowmobiling with his friends and extended family. He planned to become a Department of Environmental Conservation officer.

But his life came to a tragic end after he friended what he believed was an attractive girl he thought was a real person on Facebook,” said Darren.

“My sweet, sweet Riley who I have always known as the happiest kid, had a light-up-the room smile, fell prey to these awful people.”

The person who appeared to be an attractive girl sent Riley photos and asked him send some of himself in return, his father said.

“Of course, they escalated to very personal pictures and then they had him. These evil sick people then threatened to send these photos to all of his friends and family and to post them on other social media platforms, unless he sent them $,3500 to an app they sent him,” he said.

“He downloaded the app and then realized he didn’t have that kind of money and begged them not to do this. They in turn pressured him and threatened him to the point he was backed into a corner,” he said.

“He was so, so, so embarrassed and scared that he didn’t think he had a choice as to what to do. He was so lost and scared by the pressure these people were putting on him, he lost all reasonable thought and he made a horrible decision.”

Devin said state police told him this is not an isolated incident and “this scenario has been played out several times in this state this year.”

Riley’s father is encouraging parents to share his story with their children in the hope that another family does not have to go through a similar horrific experience. “Please educate kids by sharing Riley’s story,” he said.

Informal calling hours, memorial service and a balloon release in his memory will take place Monday afternoon, starting at 3 p.m. at The Stables at Windy Point.

A GoFundMe page had raised more than $31,000 by Sunday night to help pay for funeral expenses and a scholarship in Riley’s memory. The page can be found here.