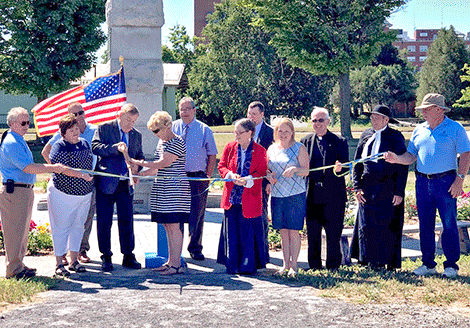 OGDENSBURG -- Assemblywoman Addie A.E. Jenne praised members of the Fort de la Presentation Association and volunteers involved with an effort to bring a historical site at the confluence of the St. Lawrence and Oswegatchie rivers back to life.

Assemblywoman Jenne was in Ogdensburg Saturday morning for the ribbon-cutting ceremony for the one-mile Abbe Picquet Walking Trail at the former site of a French fort built in 1749.

It marks the latest step forward in the Fort de la Presentation Association's master plan to rebuild the fort constructed by the French troops and the Oswegatchie Indian village once located on the site, along with an interpretive center.

"Sometimes it is difficult to know where to begin because this project and the revitalization of the entire grounds has been such a journey for the last many years. It is absolutely fantastic, and I want to congratulate the association and all the volunteers for your dedication, your commitment to this project and for making great strides," Assemblywoman Jenne told the crowd at the groundbreaking ceremony.

She was able to secure a Department of State project priority grant that was used to construct a plaza at the site of the Abbe Picquet monument. The plaza features an 1812 Peace Garden, benches and heritage plantings from the original Van Rensselear mansion.

Assemblywoman Jenne also secured $10,000 in funding through the Office of Parks, Recreation and Historic Preservation, which will be used for a path connecting the plaza to the trail.

"This is just the beginning of everything that will eventually be at this site. It really is a testament to your resiliency and your ability to overcome challenges," Jenne said, recalling some of the legal hurdles that needed to be cleared to gain access to the property as well as the effort to secure state funding for the project.

"It's been said by many speakers that the key to Ogdensburg's revitalization is our waterfront and this site in particular. I think I can see by the elected officials that are here today and the number of volunteers, not just from Ogdensburg but from all around the area, how much everyone understands that this is the case," she said.

"This truly is a special place, and we have a responsibility to maintain it. The upside of what happens when we tell our story here is we attract people from all over the world. That is how we are going to continue to build up Ogdensburg, by making sure people know our story and that they are excited and interested in learning our story," Assemblywoman Jenne added.

She said the advocacy work the association has been doing to promote the region's history is reaching a wide audience. The assemblywoman noted that she hosts the North Country Historical Writing Contest each year in conjunction with a local media outlet.

She pointed out two entries in this year's contest were centered around historical events in the Ogdensburg area in the late 17th and early 18th centuries.

"Neither of the writers were from Ogdensburg. They are sharing the story of Ogdensburg because it is so compelling. You are on the right track. I couldn't be more proud to work with this organization and help push this project forward. I appreciate your stewardship and all the work so many of you put in to make sure people know our story," Jenne said.

She said she envisions a day when cruise ships will be dropping off passengers to tour the fort site and the parking lot is filled with vehicles and tour buses.

"The folks that are committed to this site are making a change economically for Ogdensburg. I can't thank you enough," she added.

She pointed out the completion of the trail project is just the latest step forward for the association.

"It's amazing to me how emotional this place is ..., and the work that is done so you have something new at this site every year to keep bringing visitors back," Assemblywoman Jenne said.

The association's first step after acquiring the property was the removal of 10,000 tons of contaminated soil through an agreement with the state's Department of Environmental Conservation and Exxon Mobil.

The association worked with the state to develop conceptual plans for the site, joined two parcels for construction purposes, moved the Abbe Picquet monument to the site and installed interpretive signs and cultural reviews.

The trail project was made possible, in part, by a $350,000 grant from the Office of Parks, Recreation and Historic Preservation. Funding from the St. Lawrence River Redevelopment Agency and major corporate sponsor SeaComm Federal Credit Union helped fill the gap.

Melissane P. Schrems, an associate professor of history at St. Lawrence University, said during the groundbreaking ceremony for the trail two years ago that Abbe Francois Picquet came to the region to strengthen the French colony and convert the Iroquois to Catholicism. The fort, originally known as Fort de la Presentation, was built in 1749.

She noted that six years later the Oswegatchie Onondagas dominated a population of 3,000 indigenous French allies, a population 75 percent that of 1755 Montreal.

Dr. Schrems said French and Indian allies left the settlement and went to nearby Fort Levis, site of the last North American battle of the Seven Years’ War in 1760.

She noted in the same year the English claimed, rebuilt and renamed the property at the confluence of the St. Lawrence and Oswegatchie Rivers as Fort Oswegatchie.

It remained British property until 1796 when Jay's Treaty made the fort American property. The American settlers named the settlement Ogdensburg in honor of Samuel Ogden.

Dr. Schrems said the fort was reactivated during the War of 1812 and adopted an American version of its original name, becoming Fort Presentation.