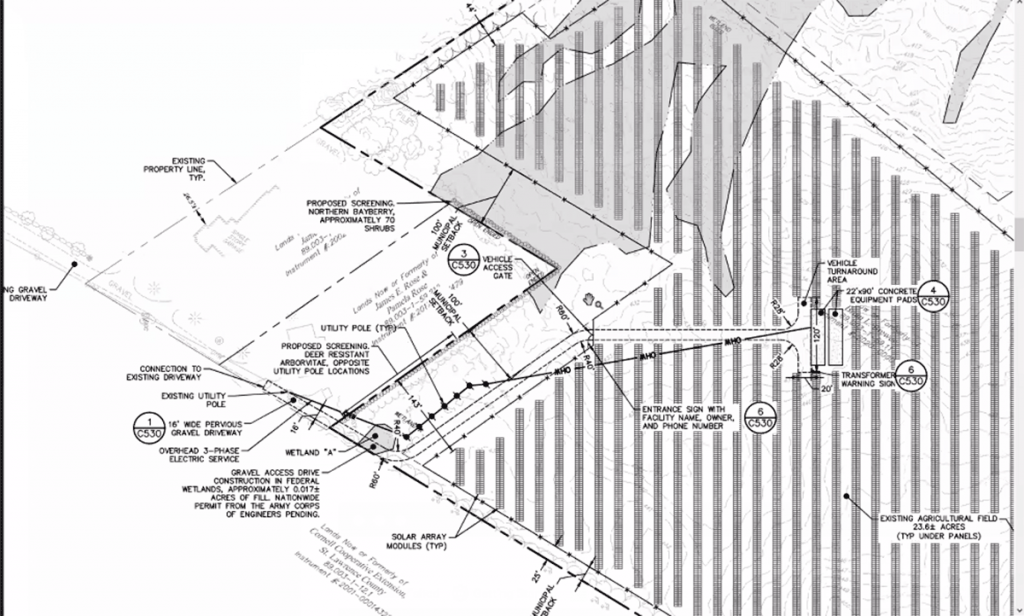 CANTON – Developers are working out the details of a 21-acre solar farm proposed at 161 Meade Road.

The project has already gone before the county planning department, and developers met with the town’s planning board on Dec. 15 to review the preliminary site plan.

However, the project thus far has raised concerns with neighboring land owners. The project contractors were directed by the planning board to iron out some of these wrinkles and meet again with the board in January.

According to the site plan presented at the Dec. 15 meeting, the solar farm will be a 5-megawatt facility located on a leased lot owned by Brian Brewer, reported representatives from Chazen Companies, the engineering firm spearheading the construction, and U.S. Light Energy, the company which will own and operate the farm. The facility will sit next to and behind Boyden Brooks Bodyworks and the residence of its owners, Pam and James Rose.

At the meeting Dec. 15, Mark Richardson, C.E.O. from U.S. Light Energy, presented a site plan of the project to the board for review. The New York-based company specializes in community solar facilities, according to its website.

The Roses who were also in attendance were critical of what they viewed as a lack of communication on the matter, and what they felt were needed changes on the plan.

According to the site plan map presented at the meeting, the Rose property will be screened from the solar farm by a row of Northern Bayberry or arborvitae trees and the project will feature a 100-foot setback around their acreage. About .017 acres of wetlands in the development lot owned by Brewer are to be filled in for the project, pending approval by the Army Corps of Engineers, and about 2.1 acres of trees are to be removed. The company will utilize a lease agreement with Brewer which will allow them access to the site via a right of way across the front of the Rose property. The right of way will also allow them to direct power out of the solar farm on newly installed poles.

One of the main concerns for the Roses was the expected 70 dbs of ambient noise created by inverters located on concrete pads in the middle of the site.

Also, they felt the tree screening would not be adequate. The trees are expected to max out at full growth at 12 feet, but not for a few years. Company representatives said the limited maximum growth of the trees was necessary to prevent the screen from blocking solar exposure of the panels at maturity. The panels themselves will be 12 feet high.

Other discussion at the meeting concerned construction along the right of way at the front of the Rose property.

“This is a lot for me to take in right now. You (project contractors) forwarded these documents to me this morning and my day had already started,” said James Rose, neighboring property owner. Rose said he hadn’t heard from a company representative since November. “This is the first I’m seeing it right now.”

“Yes, they’ve made some changes.  “There is a lot more changes that I can see that need to be made,” Rose said.

Richardson apologized for the lack of communication with the Roses. He pointed out that the company’s first obligation in the process is to work with the planning board on the site plan, not neighboring property owners. However, he offered to meet and discuss the concerns raised by the Roses directly.

“That would be appreciated, but again, we’ve got a little bit of a sour taste because that hasn’t happened,” said Pam Rose.

After some discussion, planning board director Mike Morgan directed Richardson to communicate directly with the Roses on the plan before the board would consider site plan approval. “We would be uneasy with moving forward until you have a chance to talk with them,” Morgan said.

Morgan said the Chazen project was the first major solar project the board has had to consider, with two more planned soon, one of which will be located on Route 11 across from the hospital building just outside of the village of Canton headed towards Potsdam.

“This is our first one and we want to make sure we do it right,” Morgan said.

Morgan said he would direct the town attorney to research the easement agreement with the Roses and provide some further guidance. He asked the developers to reconvene with the planning board on Jan. 19 with greater detail on the noise concerns voiced by the Roses and the solar facilities signage plan.