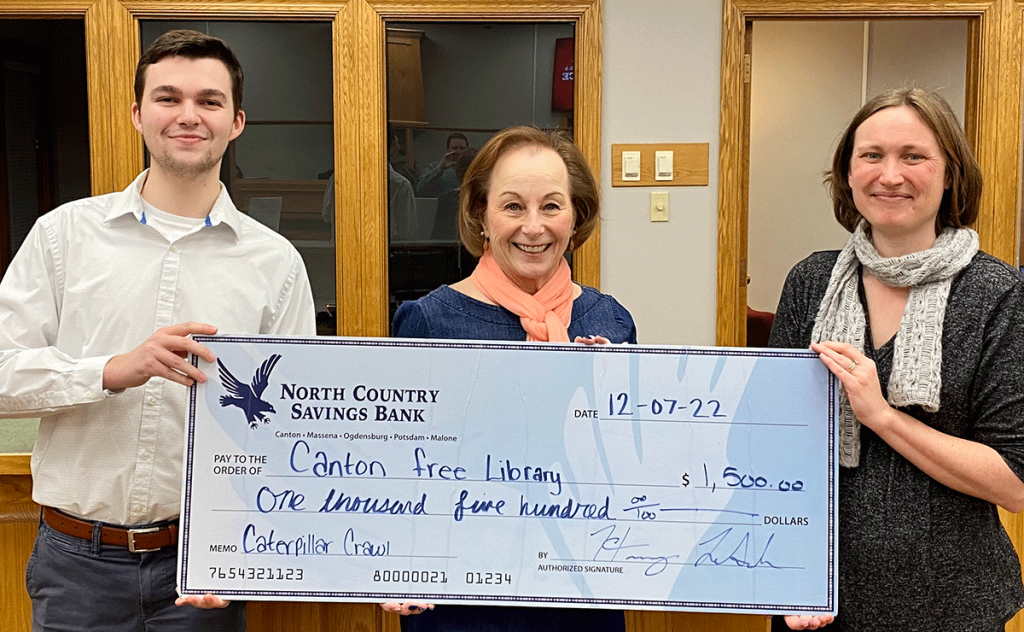 North Country Savings Bank recently made a $1,500 donation to the Brown Bear Ramble, a scavenger hunt scheduled for early fall in the Village of Canton. From the left are Cody Hazelton, representing NCSB, Doreen Radway and Emily Owen Hastings, event coordinator. Submitted photo.

CANTON – The path of the Brown Bear Ramble scavenger hunt in Canton is a bit clearer as event organizers continue to raise funds for the early fall 2023 event.

Event coordinator Doreen Radway said she has signed on with WellSculpt Foundry of Esperance, N.Y., who will be casting the statues associated with the scavenger hunt.

Radway said an initial down payment of $7,000 to the foundry is due in mid February. At press time, $3,500 in donations has been collected. Checks for $1,500 each from North Country Savings Bank and Community Bank, N.A., along with a $500 gift from the Canton Rotary Club have been garnered.

Radway noted the group is exploring grant opportunities and plans fundraising events. She pointed out the Canton Recreation Director Meghan Richardson is helping out.

“It would be a way for families, children and adults alike to familiarize themselves with merchants and all Canton has to offer,” Radway stated in an earlier article.

She said there are several goals she would like to see accomplished with the project. They include fitness, promotion of Canton’s downtown and literacy.

The proposed route will see the hunt begin at the Canton Municipal Building, making its way through downtown to Court Street to tie into the home of Frederic Remington, looping back to the St. Lawrence County Historical Association, across the street the Canton Village Park, and concluding at the Canton Free Library.

At each point along the scavenger, there will be a five-inch bronze statue for people to discover.