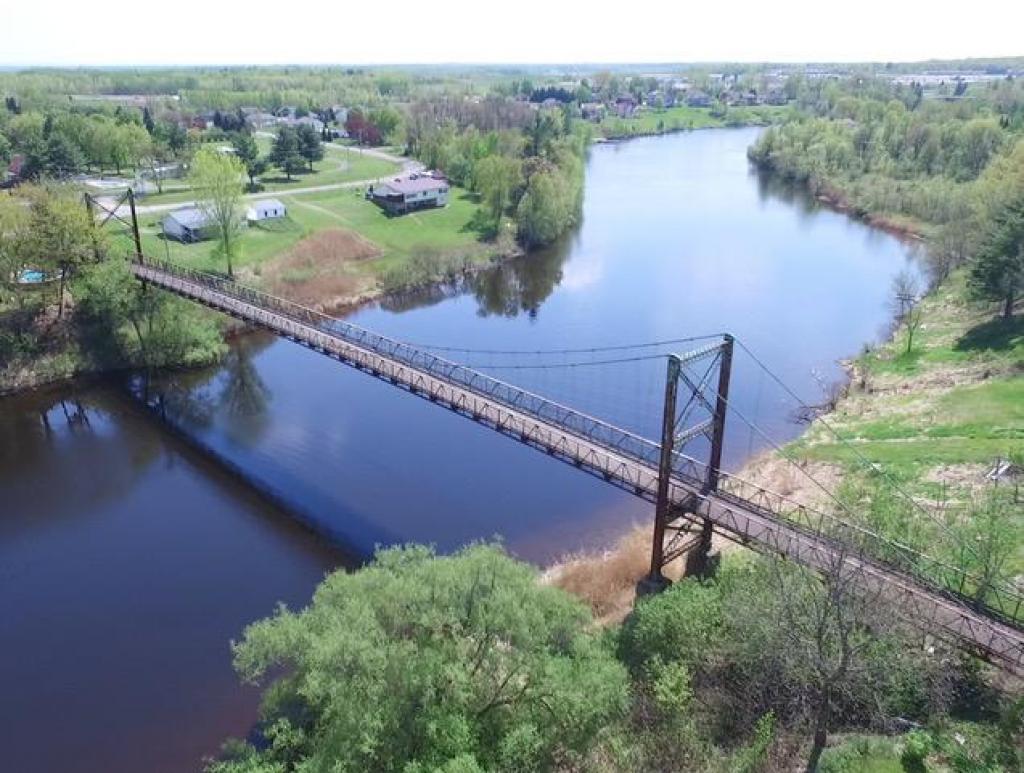 MASSENA – A world-renowned suspension bridge designer and builder from Massena is being remembered by a recently erected historic roadside marker.

The marker honors native Holton Robinson and is adjacent to the 110-year-old Massena Center Bridge, believed to be the world’s smallest suspension bridge.

Robinson, grandson of one of the first settlers of Massena, built the one-lane bridge at 600 County Route 42 in 1910. He was also involved in the design or construction of the Thousand Islands Bridge in Alexandria Bay and many in New York City and elsewhere.

A number of local officials and Massena Museum board members attended the dedication of the historical marker Saturday, July 6. The marker “will preserve history for generations to come,” said MaryEllen Casselman, Massena historian.

“When we commemorate where history happens the entire community grows stronger,” said Casselman, who obtained the grant for the marker. Pauline Pratt Nims first suggested the marker in 1956, and Cindy Bradford revitalized the effort in 2017.

“Not only is this a dedication of a fabulous permanent marker, but also by memorializing this incredible bridge we are reflecting on a feat that was accomplished by a native of Massena,” said Town Councilman Sam Carbone.

After graduating from St. Lawrence University, Holton went to work for a bridge designing firm. He became an engineer by studying at night, and was then put in charge of building the Williamsburg and Manhattan bridges in NYC.

Robinson came back to his hometown to design the Massena Center Bridge in 1909. The Massena Town Board refused to spend more than $40,000, but no contractor would bid less than $60,000,

“Robinson was positive the bridge could be built within $40,000- so if no contractor was available at that price, why he would come to Massena and personally construct that bridge, and become the contractor,” reported the St. Lawrence County Historical Association Quarterly. And he did, agreeing to finish it by December 31, 1910.

To build within cost, Robinson designed a steel suspension bridge of only one lane width. Its roadbed is only 12 feet wide with a 400-foot main span and 100-foot side spans.

“One-lane suspension bridges are uncommonly rare. In fact, it is doubtful if there is another one quite like this one anywhere in the world,” said the Quarterly.

“Holton D. Robinson probably became the world’s most expert specialist in bridge cable construction. His partner, Dr. David Steinman, once wrote that there probably was not a major suspension bridge constructed anywhere in the world but what, sooner or later, Holton Robinson was consulted.”

The bridge closed completely in 1977 Today, trees obscure the bridge, but some of the brush was recently cleared by the Town of Massena to better view the historic bridge. Despite its deterioration, the Quarterly said, “Massena’s Center Bridge is still a graceful and beautiful landmark spanning the Grasse River.”

Betty Ann Smith, who lives next door to the bridge, recalled, “We used to climb all over the bridge, and some would jump off it. We would walk across the bridge and go to the outdoor theater. People would knock on our door all times of the day and night asking if this bridge goes to Canada.”

After reading historic markers, people often remark, “I didn’t know this history happened here in my community,” said Paula Miller at the dedication. “It instills pride of place in local residents.”

Miller is an Ogdensburg native and Executive Director of the William C. Pomeroy Foundation that funded the grant for the marker.

One of its main initiatives is to help people celebrate their community’s history through historic signage. Since 2006, the private foundation has awarded more than 825 signage grants in the United States.

“Historical markers boost surrounding areas by enhancing many parts of the community,” said Casselman. “They also boost tourism by encouraging interest in the area and its history. We should all be advocates for historical preservation.”

The organization ‘Hamlet of Massena Center’ is working towards the possibility of having the bridge refurbished and reopened as a foot/bicycle crossing over the river, with the hopes to someday fully restore the bridge. To learn more, go to www.MassenaCenter.org or www.facebook.com/MassenaCenter/

To see a video of the bridge produced by the Massena Center Historical Society with research and video made by D.W. Kallison and ADK Imaging, visit https://bit.ly/2LNVOCS