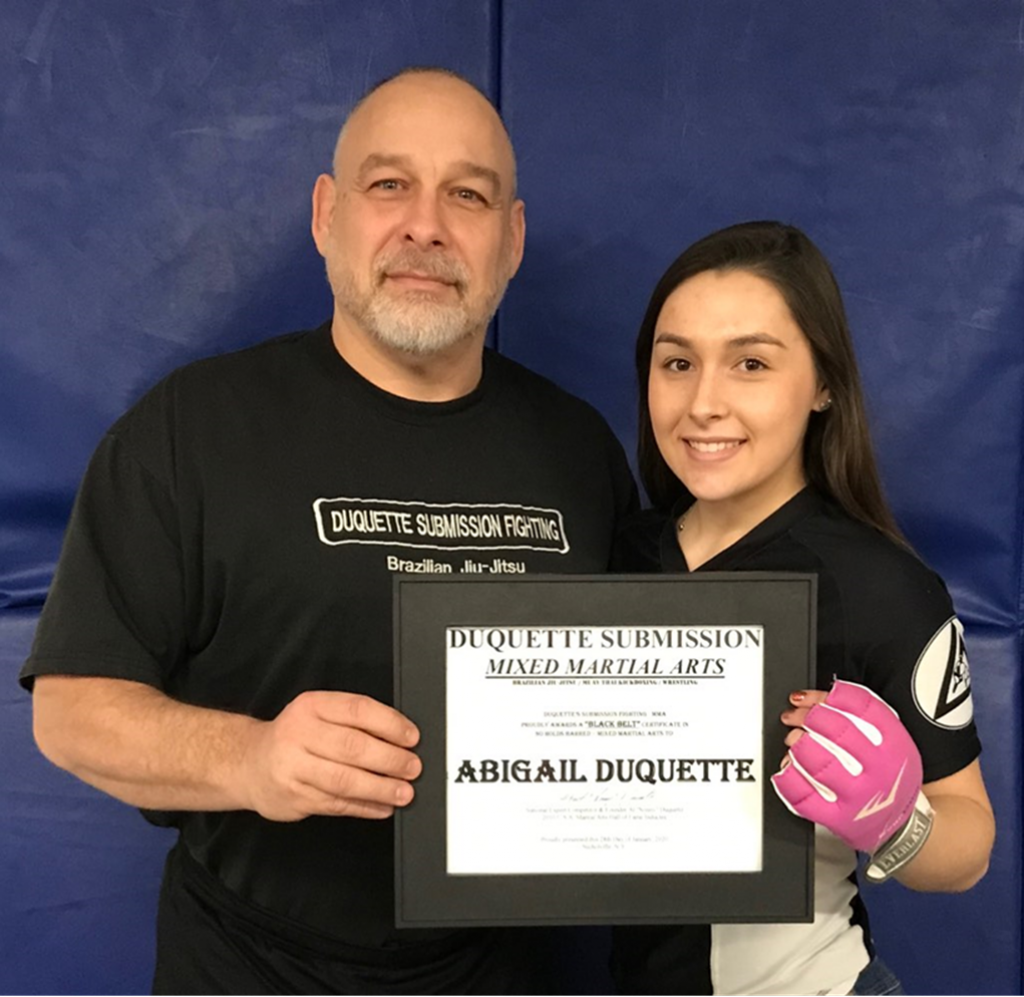 NICHOLVILLE -- Abigail Duquette, a SUNY Potsdam sophomore from Nicholville, has earned a black belt in mixed martial arts with her father as her instructor.

The 20-year-old began as a six-year-old in classes at the dojo of her father, Duquette Submission Fighting in Nicholville.

After getting comfortable with the basics, Abby was “fascinated with it, and watching UFC on TV with my dad, there was a bond, something we could do together. It drew us closer,” she said.

“I am obviously very excited for this,” said Duquette of his daughter’s achievement. “Abby started training in our kids’ class in 2005 and as she grew older, as a local police instructor for years, I eventually used her yearly at the Canton Police Academy and most recently the Potsdam Police Academy to help me train and spar with the police cadets.”

Abby’s serious training started with ground work -- primarily grappling techniques – and then sparring standup-style. She had a few training partners who helped her develop her skill. One partner, a boy, was a good match, as their skill levels were close to each other, and as one progressed, the other would benefit. It went back and forth with him for about three years, she said.

She was competing for her purple belt in the 130-139 pound weight class “at a moderate level,” she said, but competition event organizers in places like Syracuse started asking her to compete in higher weight classes, or with males, “because there were not that many females at my weight, height and skill level.” And she still beat out all comers.

“To earn the black belt, I had to teach, to solidify my position for a black belt,” she said.

“I’ve been instructing for 25 years now and of the thousands of students I’ve taught, only 23 have made it to being named as one of my black belts,” Sonny said. “It’s no easy task by any means. I am overly excited to name Abby as not only black belt #24, but the only female black belt ever to come from my dojo. I am one proud father, that’s for sure.”

For now, Abby’s not concentrating on tournament competition. She’s a dean’s list business student, “going to college and working. It’s more of a sport and a hobby. I’m glad I have it, glad to be able to defend myself, to know what to do” if she has to.

Her goal in the sport right now “is to better my striking game. I love striking.”

And if she wants a workout and can’t find a sparring partner, her father “will hold the mitt” while she strikes away.