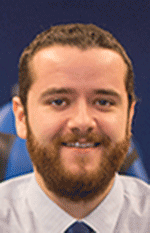 “Our esports program continues to grow and expand remarkably fast,” said SUNY Canton Athletic Director Randy B. Sieminski said in a prepared statement. “Our biggest challenge has been keeping up with the incredible popularity of the program. We now have nearly 50 esports competitors, and we’re discussing adding at least one more team this spring. We’re excited to have someone with Charles’ coaching experience and teaching background join us so SUNY Canton can continue to be a national leader in collegiate gaming.”

Murray comes to SUNY Canton from the Ellenville Central School District where he was an esports coach at Ulster BOCES and taught in the district’s media center. He also taught global studies for a year in the New Paltz Central School District. He is a grandmaster ranked “Overwatch” player and now oversees the college’s team.

“It’s a thrill to be joining such an accomplished, successful program,” Murray said in a news release from the school. “SUNY Canton’s entire executive leadership team, particularly President Zvi Szafran, has demonstrated such dedication and support for our gamers. Coach Rob Snow and others have made SUNY Canton’s teams top competitors. I look forward to building on our successes.”

Murray earned both his bachelor’s and master’s degrees from SUNY Potsdam.

The funding for Murray’s full-time position comes from a SUNY Performance Investment Fund Grant obtained by the school’s Associate Provost and Dean of Academic Support Services Molly A. Mott.

High-speed low-latency networking for the space is provided by Extreme Networks, the college’s partner in competitive gaming.