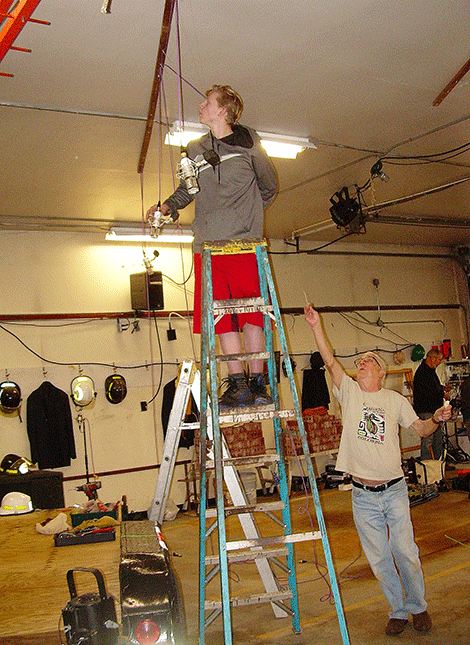 Jim Wildman, well-known theatre designer and technician from Canton, is lending his knowledge and skills to the production of Working being performed in Colton on July 20, 21, and 23. While transforming the Old Fire Station in town into a theatre for the

COLTON -- The organizers of the musical “Working” slated for July 20, 21 and 23, are providing opportunities for students to perform and learn theatre craft as they close in on opening night for the play.

Making education an important component of its summer program is both a premise and highlight of the Sunday Rock Legacy Project, said a press release from the organization.

This year’s summer musical “Working,” based on writer Studs Terkel’s interviews of working people, is a prime example. The cast and crew for the production in Colton features high school and college students performing several characters and assisting as stage technicians.

Among the young people involved in the mid-July performances is Rafael Villa. Villa is a junior at SUNY Potsdam with a double major in theatre and arts management. Originally from the Dominican Republic, his family now resides in the Bronx. Although Villa has acted in different productions such as “A Valentine’s Play” as Bob and “Servants of Two Masters” as Porter/Pandora, this is only the second time Villa has taken on a role in a musical.

Madeline Derouchie starred as Annie in St. Lawrence Central School’s presentation of the musical “Anne of Green Gables.” She sings, acts, plays the French horn and will start her college career at the Crane School of Music this fall. In “Working” she performs multiple roles and a number which highlights some of her talents.

Ayrn Rivers may be entering 10th grade at Canton Central School, but her knowledge of costuming and sewing make her a “pro,” said the press release. While collaborating with Sue Dean in the school costume shop for four years, she has costumed elementary, middle, and high school productions. And, as a young interpreter for Upper Canada Village she combines her love of costumes and history.

Joey Lashomb is the percussionist. He is 15 years old and going into 11th grade at Potsdam Central School. He participates in band, chorus, jazz band, NYSSMA area All State Concert Band, and as an accompanist for All County Chorus and All County Jazz Chorus. He composed the percussion parts for his high school marching band, and he has performed with the St. Lawrence University wind ensemble and string orchestra as well as in local high school musical pits at Potsdam, Brasher Falls, and Heuvelton schools.

Lashomb is a student of Musical Way Academy, performing at various places. He has attended Crane Youth Music for three summers, and performed with the Potsdam Community Band for three years. He has also accompanied the Norwood Norfolk Community Chorus for the past two years and also volunteers to play for individuals of SLNYSARC in Norwood.

Garrett Sleeper and Kyle Smithers are both students at Colton-Pierrepont Central School. They both helped run the lights in last year’s production of the musical “I Do, I Do, I Do, I Do” by the SRLP. They are again involved with the technical aspects of this year’s musical “Working,” learning from professionals like Jim Wildman, the sound and technical director. As part of the crew they get to assist with all elements of stage preparation and strike, thus learning many of the requirements related to stage production.

This summer two very young artists also are part of the cast. William Fryer, son of cast members Jim Fryer and Loretta Collins, is making his musical theater debut in “Working.” And Savannah Knack, daughter of choreographer Heather Knack, will have a role in her first musical.

The 2017 project is made possible in part with funds from the Decentralization Program, a regrant program of the New York State Council on the Arts, and administered by the St. Lawrence Council Arts Council.

The SRLP also is supported by three major sponsors — Brookfield Renewable Energy, Buck Funeral Home, and Canton-Potsdam Hospital — and many advertisers in the Show Program & Historical Guide which has enduring value after the summer production of “Working.”

SRLP is a partnership of the Colton Historical Society, Grasse River Players Community Theatre, and Colton-Pierrepont School Central School. For more information, log onto the project’s Facebook page, or contact Scott Muller at 315-244-9956.