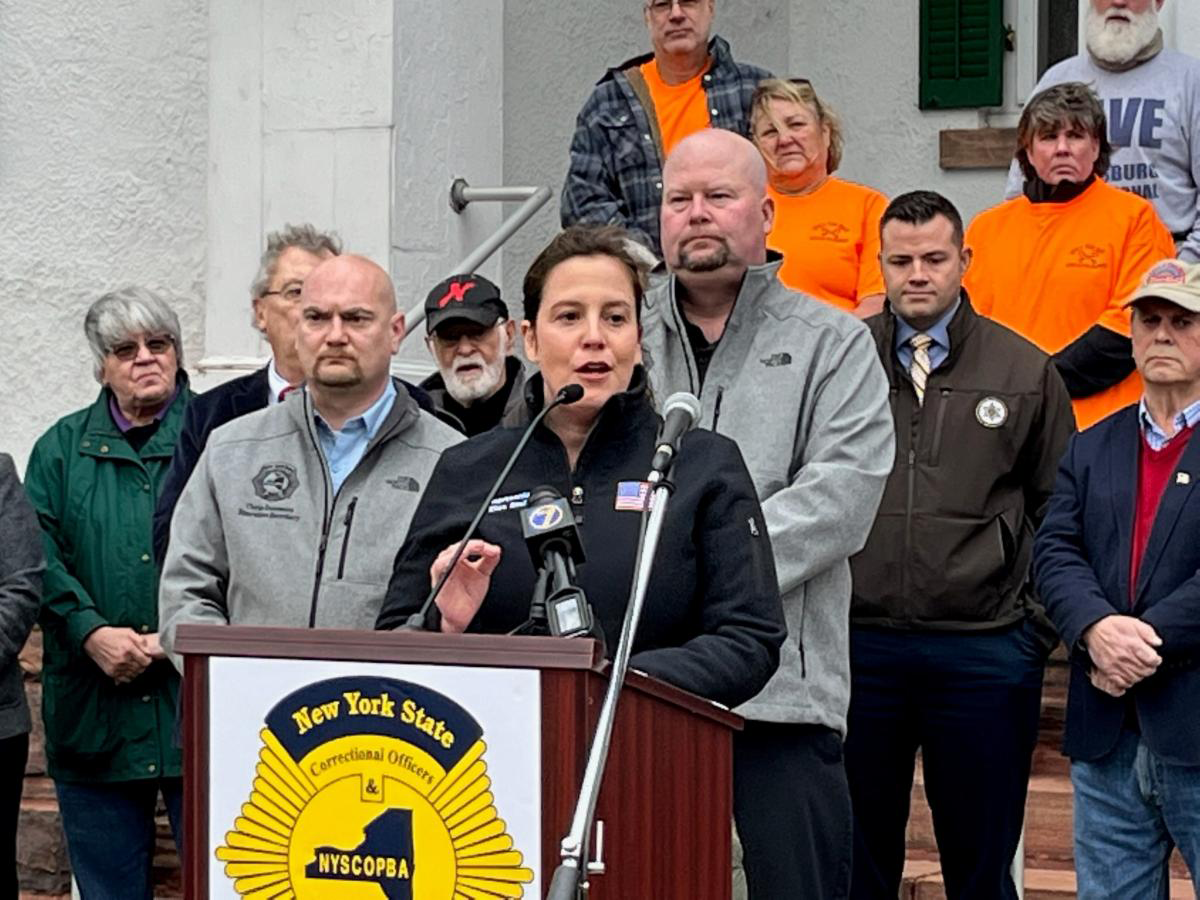 Elise Stefanik speaks at a rally held Thursday, Dec. 16 in Ogdensburg calling for the governor to keep the state correctional facility open there. Photo submitted by Stefanik’s office.

“In closing Ogdensburg Correctional Facility, Governor Kathy Hochul has broken her promise to ‘fight like hell’ for New Yorkers. Instead, she’s working against us—ripping nearly 300 jobs out of our community, which is already struggling economically. I am proud to join Congresswoman Stefanik in standing up against this decision, which will have a devastating impact locally and on the North Country as a whole. I am fully committed to continuing to fight alongside the prison’s hundreds of hardworking employees and the community to show Governor Hochul this is a misguided decision," said State Senator Patty Ritchie.

“Governor Hochul didn’t plan accordingly and instead, she has torpedoed the upstate economy. Closing a prison with no plan is lazy, it’s not fair for the hardworking staff, and devastating to communities like Ogdensburg. It’s also pretty terrible for the taxpayer, too. I am proud to stand with Congresswoman Stefanik and fight to help save the Ogdensburg Correctional Facility," said Assemblyman Mark Walczyk.

“Congresswoman Stefanik is standing strong against the past decade of poor decisions made by our elected leaders in Albany. Despite Albany’s decision to close over two dozen facilities the past 10 years, violent attacks on our members have doubled and yet nothing is being done to address it. Albany needs to know of the individuals whose lives have been severely impacted by this announcement. Our organization is committed to working to hold the department accountable every step of the way,” said Mike Powers, President of the New York State Correctional Officers & Police Benevolent Association (NYSCOPBA).

“The men and women of Ogdensburg Correctional Facility do more than just protect the community, they our neighbors, volunteers and friends. This announced closure will be devastating to the very fabric of the community, with families uprooted and lives upended. We appreciate Congresswoman Stefanik’s commitment to bringing attention to this issue that Albany is overlooking,” said John Roberts, Regional Vice President of the New York State Correctional Officers & Police Benevolent Association (NYSCOPBA).

In January, Congresswoman Stefanik joined hundreds of North Country families to protest the closing of the Dannemora Annex Prison.

In March, Governor Andrew Cuomo displaced correctional officers from Watertown to Ogdensburg, following the closure of the Watertown Prison.