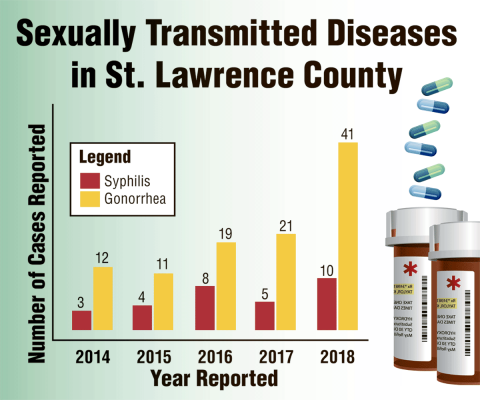 Confirmed cases of syphilis and gonorrhea have more than tripled since 2014, according to St. Lawrence County Public Health officials.

Since the first of January, six cases of syphilis have been reported this year.

While those numbers may seem low, health officials say the fact they are rising is a serious concern. That’s because the number of confirmed cases is always lower than the number of actual infections.

To help reduce the spread of such infections, St. Lawrence Count Public Health offers free discreet testing. Health officials said the stigma associated with STD’s can be a deterrent to people getting tested.

“Sometimes people are uncomfortable of testing and don’t want to share their concerns with their primary provider. There is a level of embarrassment sometimes and we try to ease that,” she said.

Public health has been working with providers to get doctors who treat people diagnosed with chlamydia to also prescribe treatment to their partners without a visit.

“If you treat the person diagnosed and you do not treat the partner they are going to re-infect themselves,” she said.

Pratt says she believes declines in education programs have led to a decrease in the use of condoms, which may be contributing to higher infections.

The number of people using protection has gone down. “There used to be a push for education about condoms and I think that has sort of lightened over the years,” she said.

According to the Centers for Disease Control, syphilis is an STD that can have very serious complications when left untreated, but it is simple to cure with the right treatment.

Without appropriate treatment, long-term infection can result in severe medical problems affecting the heart, brain, and other organs of the body, according to the CDC. Having syphilis also makes it easier to get HIV.

The disease is also disproportionately seen in gay and bisexual men, according to the CDC.

Pregnant women with syphilis can give the infection to an unborn baby. Having syphilis can lead to a low-birth-weight baby. It can also make it more likely for an early delivery or a stillborn, according to the CDC.

It is recommended that all pregnant women be tested for syphilis at least once during pregnancy.

An infected baby may be born without signs or symptoms of disease. However, if not treated immediately, the baby may develop serious problems within a few weeks.

Untreated babies can have health problems such as cataracts, deafness, or seizures, and can die.

Gonorrhea is also on the rise in St. Lawrence County. It can infect both men and women in the genitals, rectum, and throat.

For men symptoms can include white, yellow or green urethral discharge. Testicular pain is also possible.

According to the CDC most women do not have symptoms from gonorrhea. Untreated, the infection can lead to permanent health problems for men and women. For women it can spread into the uterus or fallopian tubes and cause pelvic inflammatory disease.

Pregnant women can also pass the infection to their babies as they passes through the birth canal during delivery. It can cause blindness, joint infection or a blood infection.

It is the most highly reported STD in the United States, with significantly more women infected than men.

It can cause serious, permanent damage to a woman’s reproductive system, according to the CDC. This can make it difficult or impossible for a woman to get pregnant later on. Chlamydia can also cause a potentially fatal ectopic pregnancy.

It can also be passed to a baby during delivery. This could cause an eye infection or pneumonia in the newborn. Having chlamydia may also make increase chances of delivering the baby too early.

Symptoms for both men and women include discharge and a burning sensation when urinating.