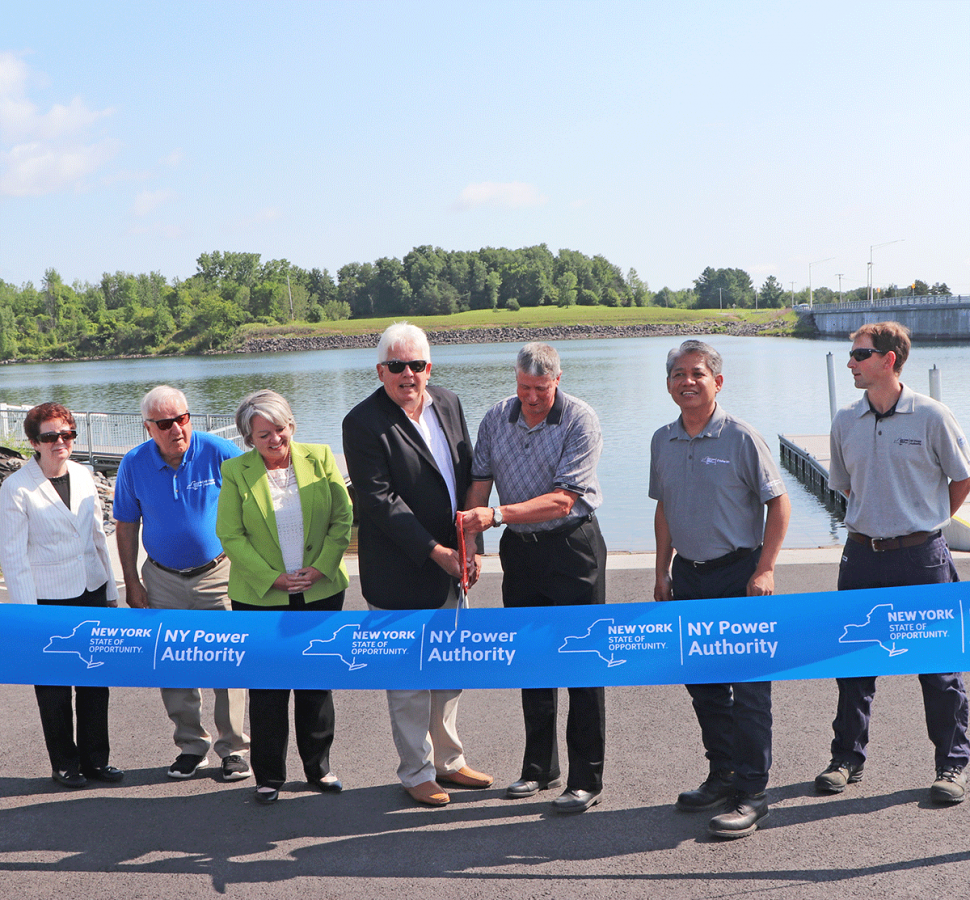 The local marina and picnic facility associated with the New York Power Authority's St. Lawrence-FDR Power Project on the St. Lawrence River now sports several improvements. The work, which started earlier this year, includes an expansion of existing boat launches from four to eight, a new dock and room for seasonal boat parking as well as the addition of two new, spacious picnic pavilions with restrooms, parking and handicap accessibility features.

Eugene L. Nicandri, NYPA Board of Trustee's Vice-Chair, NYPA President and CEO Gil C. Quiniones, were among those on hand for the official opening the renovated facility today.

"I've been watching the progress on this park over the past several months, and I am very pleased to celebrate the conclusion of this work and the official opening of these renovated facilities,” said Eugene L. Nicandri, NYPA Board of Trustee's Vice-Chair and Massena resident.

“I am very proud of the partnerships NYPA has built throughout the North Country. It is this recognition of community and partnership that makes important upgrade projects like this possible benefitting the entire area. This is a great beginning of a new chapter in the post-pandemic life of this community,” Nicandri said.

Located along a scenic portion of the St. Lawrence River and New York's international border with Canada, the Massena Intake is a popular stop for boaters and serves as an inviting local attraction for visiting tourists.

It is also the site of several national fishing tournaments.

The Massena Intake is one of several recreational facilities that fall within the Federal Energy Regulatory Commission's project boundary for the NYPA's St. Lawrence-FDR Hydropower Plant in Massena. Work on recreation facilities, which began in 2019, stemmed from the Power Authority's 10-year review of the 2003 Relicensing Agreement for the St. Lawrence-FDR Power Project. The New York Power Authority owns and operates the park and funded the renovations.

"I am very proud of the collaborative work between NYPA and the Massena and Louisville communities that has resulted in these great park improvements,” Gil C. Quiniones, NYPA president and CEO said. “The work NYPA does on behalf of recreational and tourism facilities in our host communities is particularly satisfying because it has such clear, positive impacts to the local economy and to the fabric of the communities we serve. We have already seen the benefits of the improvements at Intake Park in the form of one fishing tournament and we are looking forward to hosting more later this summer and in years ahead."

"I would like to thank the New York Power Authority for working with the riverfront communities to enhance the Massena Intake,” Massena Town Supervisor Steve O'Shaughnessy said. “It has become the crown jewel of the St. Lawrence River and is instrumental to developing tourism through fishing tournaments and recreation."

"It's been a pleasure to work with the Power Authority on the design and construction of the improvements at the Massena Intake. The sparkling new facilities will provide another great outdoor venue for local parties and celebrations and promote community tourism in the form of fishing tournaments and other events,” Louisville Town Supervisor Larry Legault said.