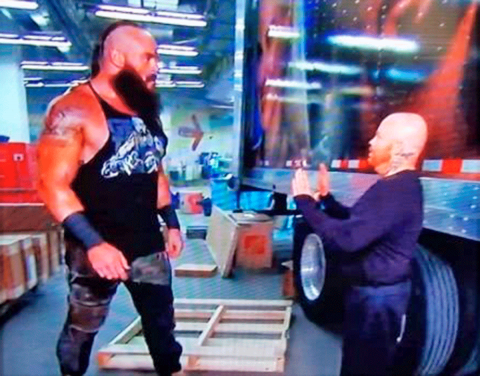 MASSENA – A pro wrestler from Massena made an appearance at World Wrestling Entertainment’s “Money in the Bank” pay-per-view on Sunday night.

Shaun Balaban, who wrestles under the name Shooter Storm, was invited to three days of WWE programming as extra talent.

He appeared briefly on screen during a backstage segment in which “The Monster Among Men” Braun Strowman picked him up and held him against a trailer before tossing him to the ground.

It may have been a small part, but for someone who has worked two decades in the business, it was the culmination of a dream.

“I've been in contact with talent relations for a while now, I have had references from top names in pro wrestling including current WWE stars,” Balaban said.

He traveled with another wrestler he has known for years, owner of World of Hurt Wrestling, Shane Alden.

The pair travelled three days to Money in the Bank on Sunday, Monday Night Raw the following day and Smackdown Live in Rhode Island on Tuesday.

He was an extra talent along with another 8 or so people from the northeast.

“It's a lot like a casting call for certain roles , they thought I was perfect for the deal with Braun,” Balaban said.

“People think the stars show up day of event go wrestle and leave but that is no way how it is,” he said.

Call time is 1 p.m. and performers stay to the final bell, he added.

Tuesday before doors opened for Smackdown, Balaban had a tryout match in front of most of the Smackdown roster.

“I am 36 years old and know the wrestlers now a days are a whole different athlete,” Balaban said. “Do I want to be a full-time part of the WWE roster? Five years ago I would have said 100% absolutely. Now-a-days as an active in ring talent absolutely not … as a manager or ref perhaps, but I love my life with my fiancé Katie.”

Balaban said he will “absolutely” continue to be around pro wrestling and help with all the knowledge he has gained over the last 18 years.

“Nobody does live TV like WWE,” he said. “Overall great experience.”

It was Balaban’s first tie working with WWE in 13 years when he had a tryout to be the characer Hornswoggle.

Balaban said he was able to mingle with most of the talent, was treated with a lot of respect and was able to catch up with many friends throughout the years that now work for WWE.