Potsdam public hearing flush with comments for and against toilet gardens 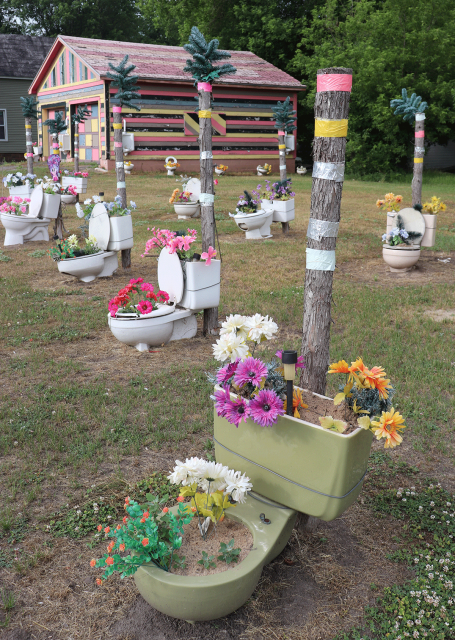 Potsdam’s toilet gardens, including this location on Market Street, across from Five Guys, drew a number of comments at a public hearing in the Potsdam Village board room Monday, June 30. NCNow photo.

POTSDAM -- Opinions for and against the infamous Potsdam toilet gardens were voiced at a public hearing hosted by the village board at the village offices and on Facebook Live Monday, June 29.

The hearing was called for by the owner of the gardens, Hank Robar, a local businessman and property owner, who has been cited by the village code enforcer over the displays under Chapter 125 of the village municipal code which deals with junk storage.

The seven properties owned by Robar which are under scrutiny have long featured displays of dozens of old toilets, some with plastic flowers and plants and more than a few smashed and broken. Opinions on the toilets over the years have varied widely among North Country residents who live, work and travel through Potsdam.

Some call them folk art and others trash, but the porcelain political battle has been a long one.

Robar installed the first toilet garden in 2004 after being denied a zoning change on property at Market and Pleasant streets. The zoning change would have allowed Robar to sell the land to Dunkin Donuts to build a shop there. The store eventually opened in another location.

After the village denial of the zoning change, Robar placed numerous toilets on the property and stuffed them with plastic flowers. A small barn was later added in a rainbow of colors, and a couple of rows of corn were planted there.

From that time the gardens have grown in number and at several properties owned by Robar, all flush with porcelain thrones.

A toilet tussle ensued, with several attempts by the village over the years to remove the bowls, including a court decision which ruled that the gardens were an artistic expression by Robar.

The village eventually adapted its junk ordinance law in late 2018 to specifically include bathroom fixtures including toilets and toilet components.

Under the law Robar has been cited with notices to comply seven times this year.

Newby pointed out that Robar was sent several letters asking him to comply with the law, starting in November 2019. The code enforcer supplied all of the documentation and pictures in the case.

"I hope all this documentation can clearly show the board that all seven properties contained here and being legally owned by Mr. Robar are all in undeniable violation of Chapter 125 of the village of Potsdam municipal code. At this time, it is my recommendation that the board of trustees advise Mr. Robar that his only option is to remove each and every toilet and bathroom fixture from these properties immediately," Newby said.

Robar was represented at the hearing by attorney Mark Snider of Snider and Smith, LLP of Massena, who spoke on his behalf.

Snider asked for copies of the pictures and letters and asked the board to make a determination on outcome for each of the seven properties individually.

"I believe a fair reading of the statute might find… you might find it applicable to the facts at hand. But generally speaking the statute itself may be fatally flawed as being vague," said Snider. "We do our best when we draft these rules and statutes but they have to tell us in advance the conduct that is going to be forbidden so we are on notice with what is appropriate conduct and bad conduct before being punished for it."

"The statute itself is designed and targeted towards Mr. Robar," the attorney said.

"Someone made up their mind that Mr. Robar was going to be punished for what he's done. So we may be in the process of violating Mr. Robar's right to protest, his right to speak freely, his freedom of expression, his idea of what is artistic whether it be your view or mine or anyone else's," said Snider.

"The ability of rural hospitals to recruit professionals is one of the most challenging aspects of elevating care for rural communities," Acker said. Acker said a survey of primary care professionals coming out of college indicates that only 5 percent wish to relocate to rural settings.

Acker said one of the things that is critically important to the recruitment process is if the professionals will like the town, buy property and want to raise their families here.

"One of the things this village has is a heritage of unbelievable architectural beauty," Acker said.

"It impacts upon property values, how the village appears, how it feels," said Acker. "And in my view this is simply not about toilets. This is about a broader issue of do we care enough about this place to enforce our codes so that we can uniformly allow those natural gifts that we have of natural beauty and architectural beauty to shine."

Susan Powers, a resident and employee of Clarkson University, read a statement from the college critical of the gardens. The statement said that years of comments from students and parents about the gardens have reflected negatively on the community.

"The look and the feel when you drive into town because of the displays has turned Potsdam into something of a joke," said resident Sharon Williams who also works in the village.

The hearing was broadcast on Facebook Live and several residents voiced opinions on Facebook which were largely in support of Robar's toilets.

"Leave Robar’s toilet art alone. It’s his property," said Karen A. Besaw-Pimentel, commented on the Facebook Live session. "Worry about the locals and not JUST the college kids. You seem to only care about them instead of the locals."

"Should we start a public poll to see if the art is really harming anyone?" asked Cheryl Williams on Facebook.

"The problem with Potsdam, they only cater to college students. Not the locals. Toilet art is not hurting anyone. You worry it will hurt the image of Potsdam. No. It won’t. The thing is that’s ruining the image is the college kids damaging everything, bad mouthing the locals, etc. Leave Robar alone," said Besaw-Pimentel.

"Leave Hank and his toilet art alone! All local governments will be taking a financial hit due to the COVID crises. Potsdam doesn't need a costly legal battle. Hank has the funds and a lawyer with a good record of success advocating against local municipalities," said Chris Tayler.

"So I live in Canton and in my humble opinion toilet art is kind of fun to see. Absolutely harmless. I hope you all decide to leave it alone," said Monjori Lundi.

No action was taken by the board following the hearing regarding the citations.