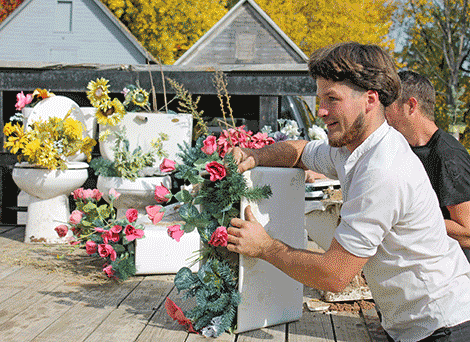 POTSDAM -- One of the village’s iconic toilet gardens has been removed.

Ron Page now owns the property at 28 Pierrepont Ave. and opted to remove the display, which was installed by the former owner, Hank Robar.

Page says he plans to build student rental housing on the now-empty lot.

“I’d like to say thank you to Mr. Robar for letting us purchase the property. I know he has a legit gripe with the village,” Page said. “We’re going to build student housing for student rental. I haven’t quite determined the size yet … I anticipate starting construction in the spring.”

The now-vacant Pierrepont Avenue lot was the site of an apartment building that burned three years ago. A year later, one of the tenants was sentenced to state prison for intentionally starting the fire.

A neighbor said she is happy to see the toilets go.

“I’m incredibly grateful to Mr. Page and to Mr. Robar for letting go of it,” said Christine Lancaster, who lives two houses down from the former toilet garden site.

Another neighbor on the street, John Lancaster, went to a village board meeting last year and said he saw the toilets as a slap in the face.

“It’s a great big middle finger to my wife and I, to our neighbors and local businesses,” Lancaster said in August 2015. “It’s an eyesore, and you can’t ignore it.”

Robar has garnered both support as an artist and derision as a malcontent since his first toilet garden popped up on property he owns at the corner of Market and Pleasant streets after the village Planning Board would not grant a variance to allow Dunkin’ Donuts to build a new store there some years ago.

Robar has planted corn at the site, decorated the toilets with flags for national holidays, and painted the garage in bright colors.

Since then another toilet garden on Maple Street across from Clarkson University has been put up.

Those who are fans of Robar’s toilets can still see them on Maple Street across from Clarkson University and on Market Street near Stewart’s.