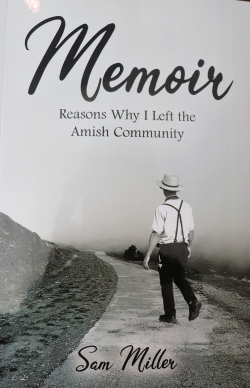 CANTON – At the age of 17, Sam Miller made a life-altering decision to leave the Amish community. Thirteen years later, the now Nicholville resident, has put his memories in writing, releasing a book, “Memoir: Reasons Why I Left the Amish Community.”

“I was very pleased with the transcript of the book. I wanted people to know as much about the Amish religion and why I left the community,” said Miller, now 30 years old. “I feel that I was able to convey this in my memoir, and I hope my readers feel the same.”

The book was released in December by the Dorrance Publishing Company, Pittsburgh, Pa.

It was around 10 p.m. on the night of June 4, 2009 when Miller made the bold move to walk out the door of his Amish residence in Lawrenceville for the final time, so he thought.

Being under the age of 18, Miller was returned to the home by police. He had just two months until his 18th birthday and then the opportunity to leave for a second time, which he did.

The Miller family moved from Ohio to Lawrenceville in 2004, when Sam was 12 years old.

After he left the Amish homestead, Sam stayed with friends in Malone. He had lived in Indiana and Vermont working various jobs in construction and farming, before taking root in Nicholville.

“I still reside in North Lawrence, specifically in the village of Nicholville. My family lives close by in Lawrenceville, However, I have not seen them since I left the Amish community,” said Miller.

It took Miller two years to complete the memoir that focuses on his experiences, both good and bad, growing up as Swartzentruber Amish. After leaving the community, the public wanted to learn more about Amish life, encouraging Miller to write the book.

“I began writing the book in April of 2019. It took roughly two years until it was complete and ready to be sent to the publishing company,” Miller noted. “The book is a lot about the Amish lifestyle and why I left the community.”

A friend and reader of Sam’s book enjoyed the memoir.

“Sam’s story is unique and special. He left one of the most strict religions at a very young age, with no promise of outside support or guidance,” said Christina Pointer. “He had never used a cell phone or computer, did not have a social security number or birth certificate and only went to school through the 8th grade. He had no knowledge of the outside world.”

To get a feel for the book, the chapter titles are:

Chapter 2: Having to Return to the Community Until of Age

Chapter 8: Working for Another Amish Family

To purchase the book visit https://bookstore.dorrancepublishing.com/memoir-reasons-why-i-left-the-a... or go to Amazon.com/books.

Looking back on difficulties surrounding transitioning to a new lifestyle, Miller wanted to give something back. After researching his options, Miller decided to donate 25 percent of his personal earnings from book sales to St. Jude Children’s Hospital.

“I struggled for quite a few years to make ends meet. I also found it difficult to live in a totally different lifestyle than the one in which I was raised. Struggling alone in that way was very humbling,” Miller said. “Through hard work and the generosity of other people, I have been building a better life for myself every day, but I will never forget the difficulties of those first several years.”

“I have since been keeping my eyes open for a good opportunity to help out others as much as I possibly can. With getting a publishing deal, I saw a good opportunity to do so. I researched and found that the St. Jude Children’s Hospital is one of the largest children’s hospitals in the United States. With the research that I found, all the treatment they do for children they provide at no cost. This is why I decided to donate to them.”