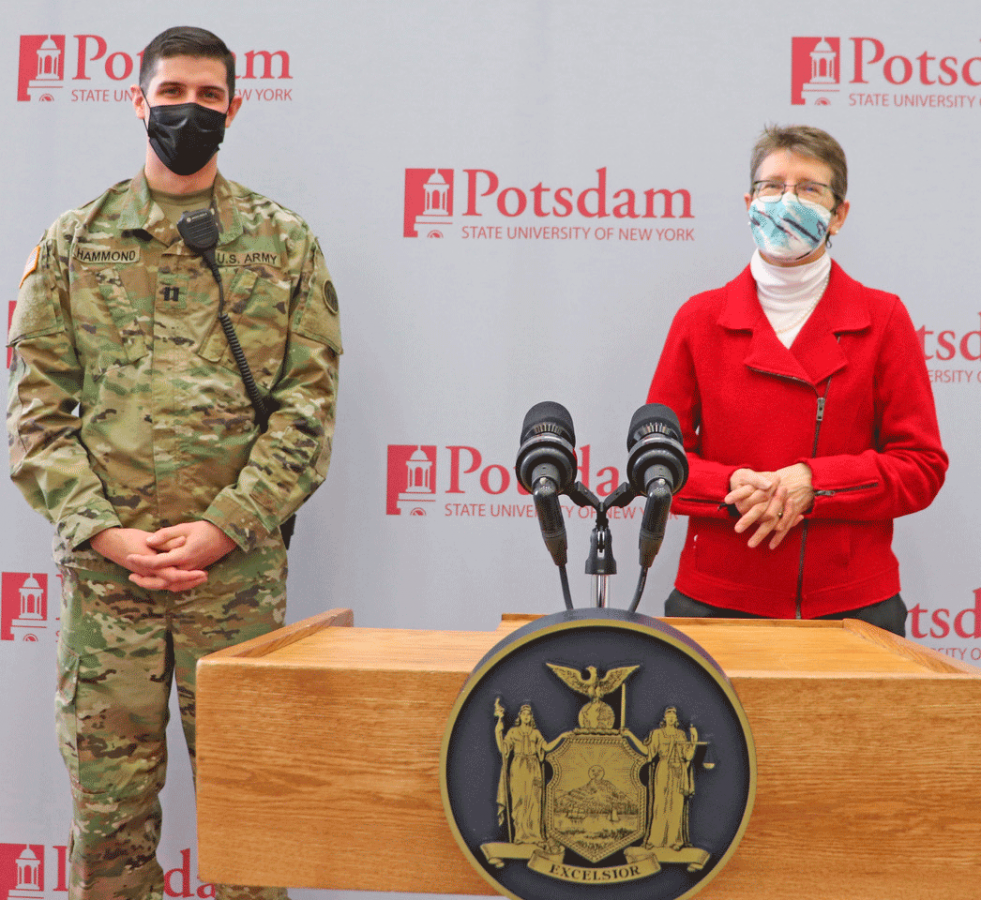 SUNY Potsdam President Kristen Esterberg stands with Waddington Town Supervisor Alex Hammond, who was deployed by the National Guard to assist with operations at the regional clinic.

The hub opened with Department of Transportation Commissioner Marie Therese Dominguez, along with SUNY Potsdam President Kristen Esterberg, on site to commemorate the event.

Dominguez said the clinic will administer 500 vaccinations daily and scheduling can be done online or by phone. The news was welcomed as St. Lawrence County residents reported trouble setting up appointments last week.

“We are at war,” Dominguez said, adding that vaccinations were the best weapon against COVID-19, which has claimed more than 2 million lives globally and 55 in St. Lawrence County.

Dominguez said Gov. Andrew Cuomo’s goal is to make New York the first COVID-free state. And while New York is leading the country in distribution, the rollout is limited due to supply.

Although Dominguez was excited to announce the clinic, she said the state faces a lack of supply, which she blamed on the federal government.

She said the state is receiving just 250,000 doses per week, but has a pool of 7 million New Yorkers eligible for the jab. She said efforts are being made to increase New Yorks distribution to help meet that need, but it has to come from U.S. government.

Dominguez asked for patience, as supplies will limit the number of people who can get vaccinated in the near future, but urged everyone who is eligible to schedule appointments as soon as possible.

As of Monday morning, appointments were booked into February. She said appointments can be booked now even if the date of the vaccination is a month or two away. She said there is no need to wait to make an appointment.

Statewide, New York is lagging behind others state for percent of doses received administered, according to a report from the Associated Press.

However, the North Country Region has been among the most successful in the state with 97% of doses received administered. Only the Southern Tier ranked higher at 99 percent.

Although Dominguez said the rates of vaccination wouldn’t be consideration for where the state moves allotted doses, in a press conference Gov. Andrew Cuomo said he would make sure vaccines were going to places that are successful in distributing them.

"We are in a footrace to get the vaccine into the arms of eligible New Yorkers as quickly and equitably as possible," Governor Cuomo said. "However, we now have 7 million New Yorkers vying for a fraction of doses made available to use by the federal government. We need Washington to step up and increase New York's supply to make sure everyone who wants the vaccine has the opportunity to get it."

Esterberg said she was excited to see the site open on SUNY Potsdam’s campus and that if the facility can’t be used for sporting events, this is the best possible alternative.