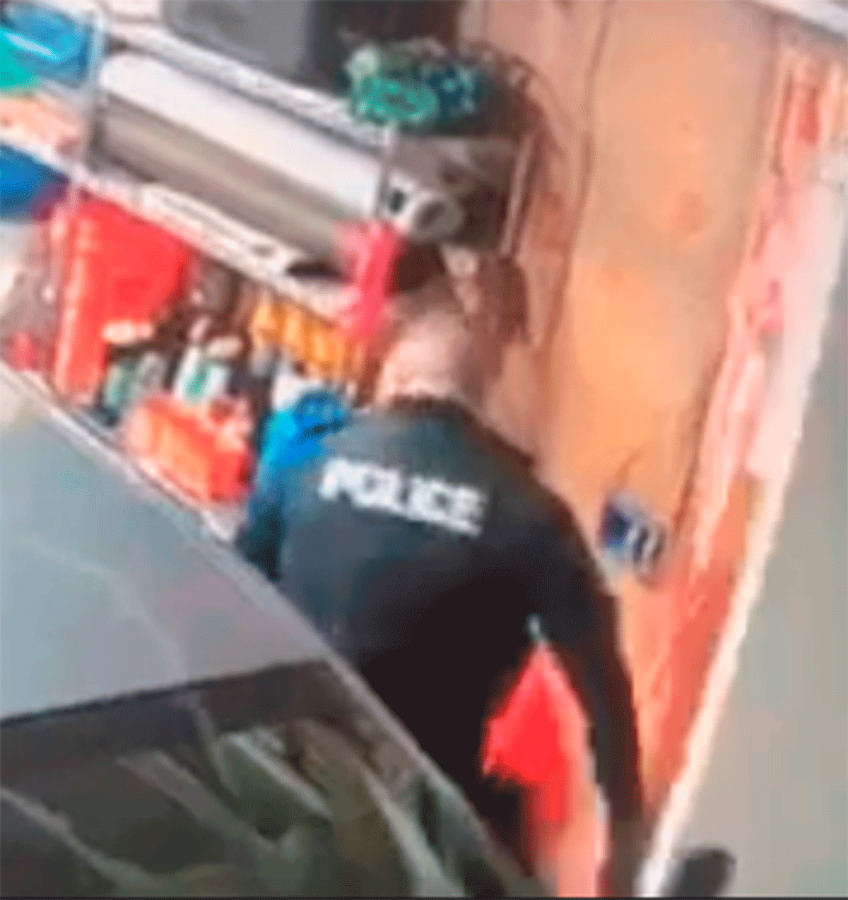 A Massena police officer was captured on video damaging a vehicle while executing a search warrant.

MASSENA — The village police chief says there is an internal investigation into a video that allegedly shows a Massena patrolman intentionally damaging a vehicle while executing a search warrant.

Attorney Brian Barrett is representing the owner of the vehicle, but he declined to name the person.

The alleged incident took place March 16. The 20-second video, which is widely circulating on social media and includes audio, appears to show the inside of a garage, which Officer Brandon Huckle enters through a side door. When Huckle opens the door and enters, it strikes a grey-colored vehicle inside the garage, making an audible impact.

Huckle looks down at the area of impact, then looks off camera to the viewer’s left for several seconds. He then flings the door into the car a second time using a motion from the wrist, again making an audible impact.

A couple of seconds later, Huckle grabs the door again, and this time using a full arm motion, swings then door so it hits the car a third time with an audible impact. Then, it sounds like an unidentified person off camera to the viewer’s left says something to Officer Huckle, who looks down at the point of impact, starts to walk toward the person who spoke, and the video ends. Barrett said his client will have an estimate on any damage in the next week or so.

He said he learned about the video from the St. Lawrence County District Attorney’s Office, who is prosecuting his client on a felony drug charge related to the March 16 search, and turned it over as part of discovery materials. Prosecutors are required to turn over to defense lawyers all evidence they have on the case. Barrett said after seeing the video, he posted it to his personal social media because “I thought this was a matter of public interest.”

“I am unable to respond at this time because it’s an ongoing investigation into a personnel issue,” he said Wednesday, May 5.

Police were at the home on March 16 to execute a search warrant, according to Barrett. He says police seized items from the home that included U.S. currency. He says his client believes there is a discrepancy between what he had and what was reported as evidence.

“I would say that we have reason to believe the money that was seized as part of the search warrant was not all returned as evidence. We think there’s about a $2,000 disparity,” Barrett said.

Barrett said he has a meeting scheduled for Friday with Massena Police Lt. Cody Wilson, but doesn’t anticipate filing a formal complaint with the village police department.

“Because of the numerous comments that are made about this video, and people are telling me they’ve had horrendous dealings not only with Officer Huckle, but other officers from this agency, I think it would be more appropriate to bring a complaint to the St. Lawrence County Sheriff’s Office or New York State Police,” Barrett said.

He says seeing the video lends credibility to claims from other clients who allege police officers damaged or destroyed property while executing search warrants.

“Clients tell me all the time that property is destroyed or stolen during search warrants. This is a rare occasion where we have a video of a police officer destroying a client’s property,” he said. “I’m more inclined to believe my clients now that I've seen this with my own eyes. I’ve got to take a very close look at those cases and the returns on the warrant and things like that.”

Massena village government officials could not be reached for comment on whether or not Huckle is still employed as a police officer, or if has been suspended pending the outcome of an internal investigation.