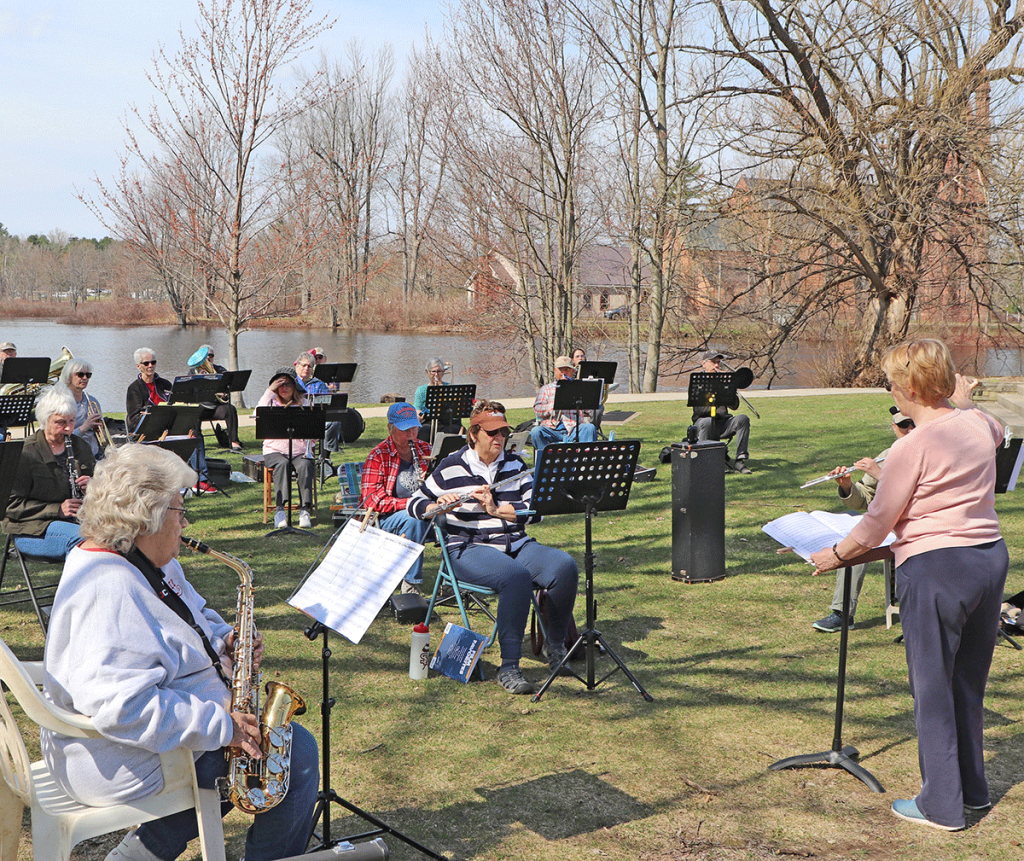 Two dozen members of the Potsdam Horizons Band of Northern NY had their first outdoor band practice this year at Ives Park, Potsdam, April 9. They have been having online practices through Zoom for several months prior to warmer weather. NCNow photo

POTSDAM – Ives Park is alive with the sound of music many Friday mornings, with the return of practices by the New Horizons Band of Northern New York.

The theme to “Star Wars,” as well as well as other movie and Broadway tunes, could be heard in the park during their first 2021 outdoor practice.

“I was so excited to get back together again that I got chills today during practice,” said Band Director Diane Mathie.

The Horizon Band, made up of 49 adult musicians from Potsdam, Norwood, Massena, Canton and Heuvelton, started playing outdoors during COVID from late April until November last year, when weather permitted.

“Directing the band through Zoom was challenging to say the least, but it did keep us playing,” said Mathie.

“How wonderful it is to be outside and playing as a group,” said horn player and Norwood resident Pat Matthews.

“I absolutely love playing my horn, and the New Horizons group is a whole lot of fun – especially my partners in the horn section,” said Matthews.

“The band lets each of us participate at our own skill level. You can learn a new instrument with lessons or go back to playing an instrument you played in your youth,” she said.

The band’s first concert his year is planned for the Potsdam Summer Festival if it is safe then with the pandemic.  They missed performing at all last year, due to COVID.

The New Horizons Band is an outreach program of the SUNY Potsdam Crane School of Music. It has several different levels of performance, from a beginners’ development band, to a clinic, concert band and swing band.

The swing band, directed by Theresa Witmer, plays jazz and swing music. The clinic is directed by Paul Beull.

Diane Mathie took over as director of the concert band one year ago, right after COVID hit in Potsdam. She succeeded Ron Berry, former director who founded the band in 2009.

A native of Potsdam, Mathie returned to Potsdam after retirement as a music teacher in Boise, Idaho, where she lived for 40 years.

“I am hoping we can possibly venture indoors for practices again soon,” said Band Director Mathie. “This is what I live for.”

People interested in joining the band may email newhorizonsnnygmail.com