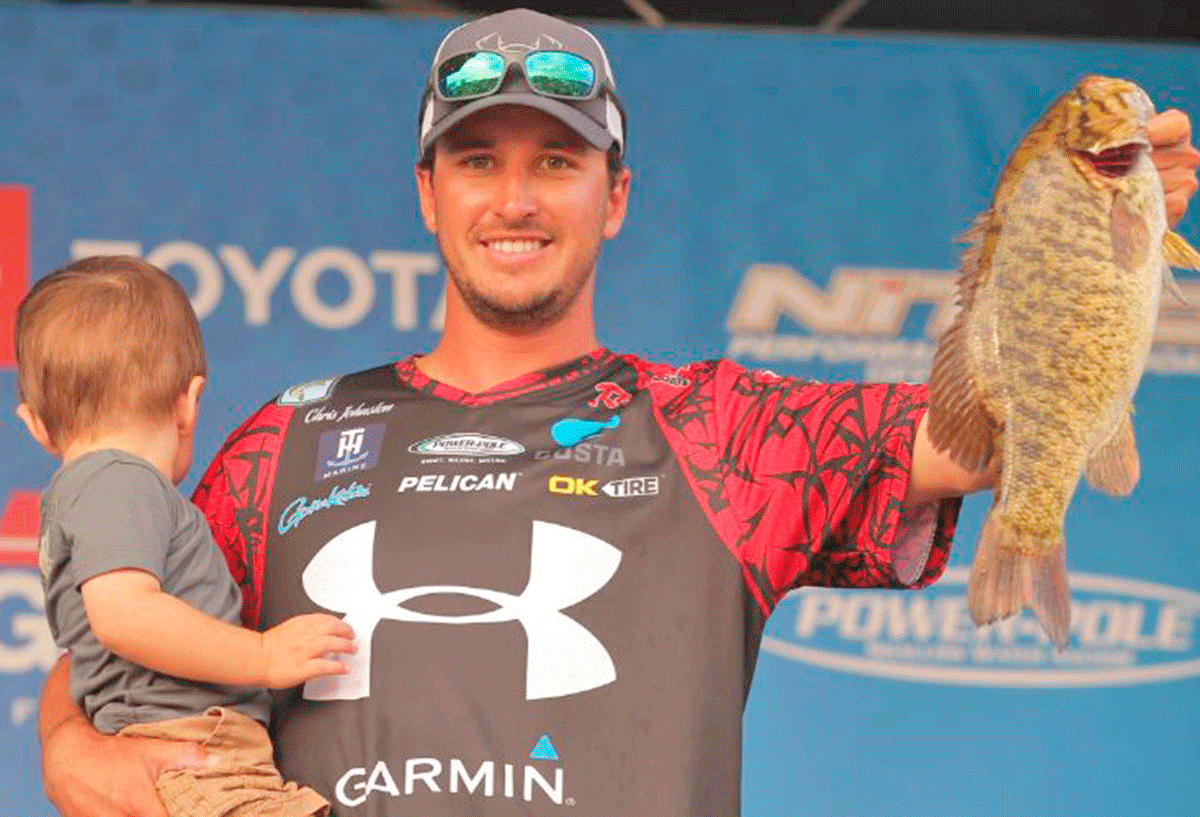 Canadian bass pro Chris Johnston held onto the lead Friday in the Berkley Bassmaster Elite tournament in Waddington. Here he is also holding onto a couple of friends during Friday's weigh-in. Photo from Bassmaster.

WADDINGTON – Canadian pro Chris Johnston maintained a slim lead yesterday on Day 2 of the 2019 Berkley Bassmaster Elite tournament on the St. Lawrence River after weighing in with 22 pounds, 13 ounces of fresh bass Friday.

The Canadian is known as a smallmouth specialist and showed it after the first two days of the 2019 Berkley Bassmaster Elite. He had a two-day total of 47-4 and the lead heading into Semi-Final Saturday. Still, Johnston is not overconfident.

“I have been leading on Day 2 on this river for more tournaments than I can count, and have blown it on the third day. So, I’m not going to count my chickens just yet,” Johnston said.

He said the area he has fished relentlessly over the past two days alongside Elite Series pro Shane LeHew may no longer hold enough fish for the win.

“I didn’t get a lot of bites today and only caught six or seven 4-pound fish there. And I never saw a kicker fish. So, I’m pretty sure I’m going to have to scramble tomorrow. I really believe the guy that wins this event is going to be the one who makes the best adjustments on the fly. I just hope I can figure out those adjustments.”

Elite Series veteran Steve Kennedy is only 15 ounces out of the lead. The affable Alabama pro followed up his impressive Day 1 limit of 23-7 with another solid 22-14 worth of smallmouth for a total of 46-5. “I’m living on the edge,” Kennedy admitted. “I’m only fishing for seven or eight bites per day. If the weather report is accurate and we get overcast skies tomorrow, I might have to change my game plan.”

Kennedy’s tactic so far has been to cast a big glide bait to locate fish, then cast to the fish with a swim bait or hair jig. However, if he can’t see the fish, his weight could slide south.

“I’ve caught some of my biggest fish looking at them. I mean, I’ve had to cast four or five times at the bass to get them to bite. If I can’t see them, I may be in trouble.”

New Jersey pro Greg DiPalma holds the third-place slot after boating 21-11 on Day 2. His total of 45-1 puts him in solid striking distance of holding the big blue Elite Series trophy at the conclusion of the event, as he is just a couple pounds out of the lead. And unlike Johnston and Kennedy, DiPalma is looking forward to overcast skies today.

“I’m fishing the 20- to 30-foot zone, so sunshine isn’t as crucial.” DiPalma also made an important adjustment today, which has him feeling confident going into Semi-Final today. On Thursday, he said, “I basically dragged a jig for all my fish, and I lost a bunch of big ones.” But on Friday, “I switched to a Carolina rig and only lost one. I’m only sharing my water with one other angler and there are a bunch of bass there, so I’m confident I can duplicate my weight.”

Brian Snowden landed the Phoenix Boats big bass of the day, a 5-13, which gave him a two-day total of 44-7 and 6th place.

The St. Lawrence River, name the No. 1 “lake” in the nation by Bassmaster Magazine, again showed off, as 22 limits exceeding 20 pounds were brought to the scales.