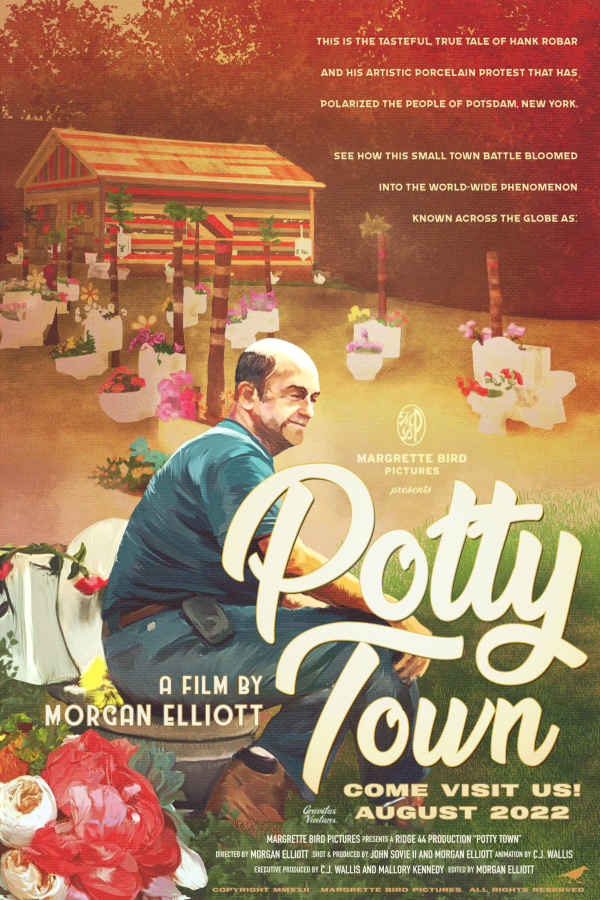 POTSDAM — A locally produced documentary about the toilet gardens will be released on major streaming services some time in August.

The producer of the film “Potty Town,” Morgan Elliott of Ridge 44 Productions, made the announcement on the documentary’s Facebook page earlier this week. “Are you sitting down?? We've got big news.... POTTY TOWN is going world-wide in August, available on major streaming services!!” said the post.

Elliott later confirmed the release with North Country This Week.

“We signed a distribution deal with Gravitas Ventures, they are planning an August release date on streaming platforms — that might include subscription based or rent/buy options,” Elliott told the newspaper.

The film features the story of local Potsdam businessman Hank Robar and the gardens he set up with fake flowers, toilets and bathroom fixtures on lots he owned around the village. Robar crafted the displays starting in 2005 as a form of protest against the village, which denied him a zoning variance on property he was intending to sell to a developer.

The village in turn protested Robar’s protest and a years-long legal donnybrook ensued, with Robar often constipating the village’s efforts to void the gardens.

Robar eventually won out in U.S. District Court, with a favorable decision directing the village to leave the gardens alone. Robar was paid a settlement which included at least one direct payment of $25,000, according to heavily redacted village records released to North Country This Week following several Freedom of Information Act requests.

The issue was, and still is, a polarizing one in the community. Those against claim the toilet gardens devalue village property as whole, while those in support often cite Constitutionally guaranteed rights to free speech.

“We made that announcement on Facebook with our new poster artwork and it’s got people a little stirred up I think, not knowing exactly how the film is going to represent the town and Hank’s story. But we’ll be releasing the trailer sometime in the next several weeks, so they’ll be able to get a sense of the film before it comes out later this summer,” Elliott said.

Comments on the documentary’s Facebook page post announcing the August release break down with many in support, but with several critical of the film, the gardens, Robar and the attention the community has received nationally for the issue.

“Great, just what we wanted to be known for. Hope they cover how hard it must be to hold a grudge for so long and how our children hang their heads in shame every time they meet a new friend from out of town. So selfish!” writes Ruth N John Narrow.

“Ruth N John Narrow lmao i grew up in potsdam and was always vvvv proud of the toilet art. my friends from out of town were jealous!” responded Ella Rubio.

“Ella Rubio i went to suny potsdam and every art major i knew was in love with the toilet garden,” wrote Sydney Gunnip.

“I love the toilet art. Hank is a good guy. Maybe the village shouldn't of allowed it. There is a reason why Hank won what he did was all legal,” wrote Crystal L Williams.

“Ridiculous Potsdam was a nice place to live ‘til he started his crap,” Simone Rodwell wrote.

“One area was fine but now they are all over and makes the area look horrible and tacky,” Stephanie Gebo wrote.

As far as the specific release date, Elliott said more details will be released in coming weeks.

“They can keep an eye on our Facebook page for that release, which might premiere elsewhere online too,” said the producer.

For more information on the film visit www.facebook.com/PottyTownDocumentary.