CANTON – A 29-year-old Canton man was arrested by Canton police May 18 at 9:48 p.m. after allegedly choking and headbutting a female victim 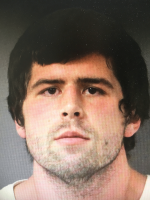 during a domestic dispute at 91 Miner St.

Jonathan J. Lamora, a resident at the address, was charged with third-degree assault, criminal obstruction of breathing and blood circulation and second-degree harassment.

Police said Lamora allegedly shoved the victim down onto a couch, placed both of his hands around the victim’s neck and over her throat so that her breathing was obstructed. Police said Lamora head-butted the woman two times that caused a visible contusion to her forehead, and then dragged her to the backdoor of the residence.

The woman was able to break free and flee the residence, said police.

Lamora was arraigned in Canton town court and was released under the supervision of the county probation department.

An order of protection was issued on behalf of the victim by the judge.