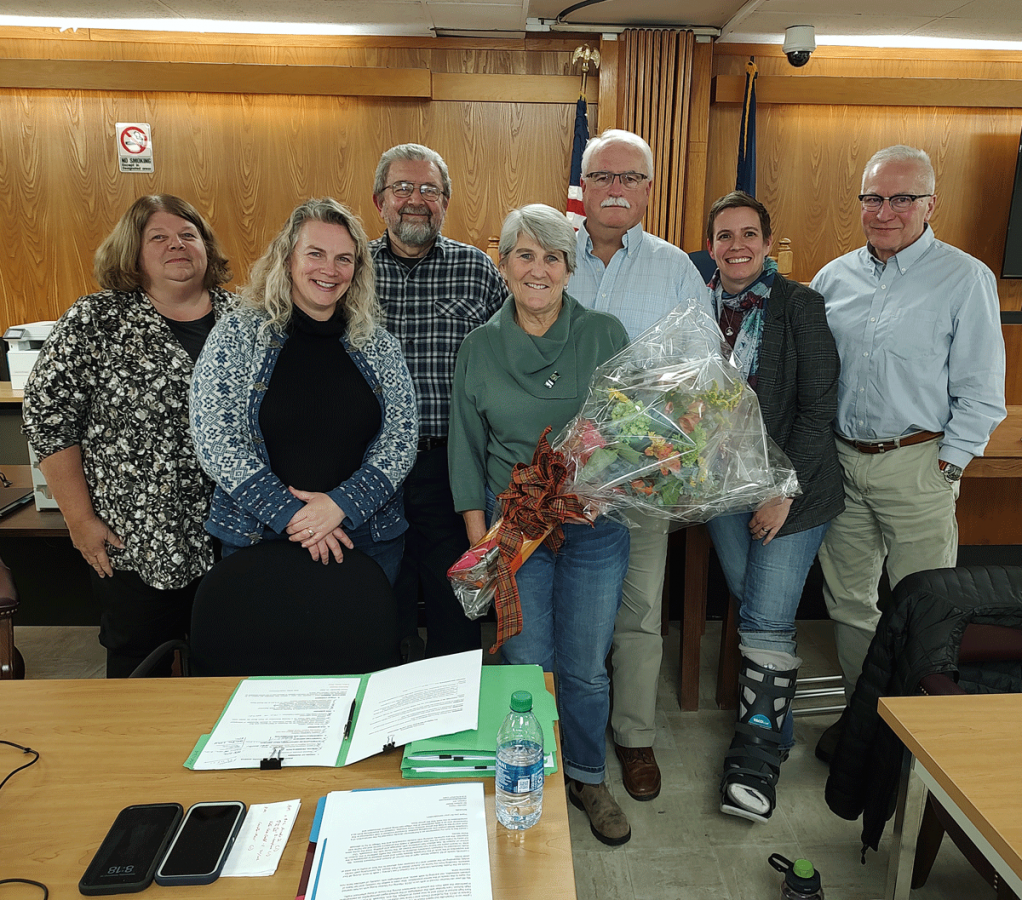 CANTON – A nearly nine-year stint in village government came to an end Wednesday night after members of the village board accepted the resignation of Trustee and Deputy Mayor Carol Pynchon.

“Carol has been a tremendous help and has been a very active participant on the board. I appreciate all the effort she put forth over the years,” says Mayor Michael Dalton. “She had the time to put into the job and she will be missed.”

“I’m very proud of the work we have done. There have been some rocky moments but it’s been gratifying and fun,” she said. “I hope people recognize the work that goes into it. It takes a lot to keep a village running.”

Pynchon’s announcement was made Nov. 7 by the mayor. Pynchon and her husband Tom are moving to New Hampshire.

Fellow board members chimed in.

“You speak about the work. The community doesn’t know how much work you have done,” said Trustee Anna Sorensen. “But people do know and deeply appreciate you.”

“I greatly appreciate working with you. It was an honor,” said Trustee Beth Larrabee. “ I so appreciate you being such a strong leader.”

“New Hampshire is lucky to be getting you,” Trustee Klaus Proemm remarked.

Pynchon’s vacant seat was filled by Barbara Beekman who was sworn in Wednesday night. Trustee Anna Sorensen was also sworn in as deputy mayor. Pynchon has one year remaining on her four-year term.

Beekman serves on the village Zoning Board of Appeals and previously served as president of the Canton Central School District board of education.

“Serving the Village of Canton as a Trustee has been an honor and a pleasure. I am proud of our many accomplishments and have very much enjoyed working with the Village staff and our fellow Board members, including working side by side with you as Deputy Mayor,” said Pynchon in a letter to the board dated Nov. 6. “I have appreciated the opportunity to interact with residents of the Village and with our colleagues on the Town side. In the process I have learned a lot about what makes a municipality function, and I believe we have taken some positive steps to ensure that our Village continues to operate effectively and efficiently.”

“I regret some initiatives that I will not see to their completion but have great optimism for Canton’s future growth and development. One hard lesson of municipal work is just how long everything takes. While there are frustrations, I hope our tax-paying residents recognize the substantial efforts made by their elected officials, which are too often unsung and disparaged. I commend you and all the members of our Board for your commitment to doing what is best for Canton, and for working collaboratively and collegially to get the work done. It’s been fun.”