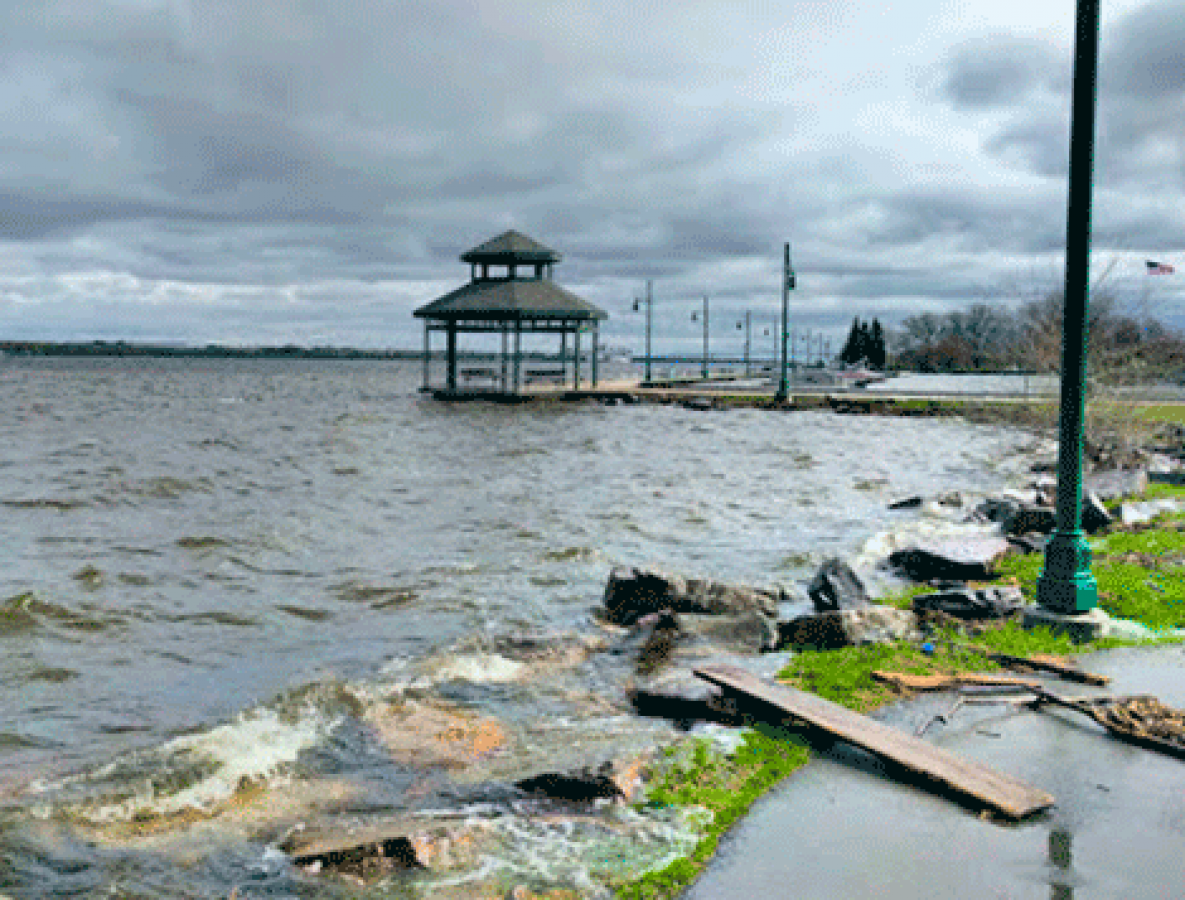 Flooding in 2017 and 2019 have caused significant damage to Ogdensburg’s shoreline. In 2017 the water level was estimated about 2 feet higher than normal. Photo by Chris Fraser.

City Planner Andrea Smith told council Monday, Feb. 24, that four projects will be 95% funded through the state’s Resiliency Economic Development Initiative. The total local share for the projects will be around $400,000. The projects will address flood damage sustained in 2017 and 2019 and include improvements should allow the city’s shoreline to withstand flooding events that could occur down the road.

One project will include the complete replacement of the existing wall system at the Confluence of the St. Lawrence and Oswegatchie Rivers. The project will be funded with s $1.9 million REDI grant and will require a 5 percent match from the city, which is expected to cost about $100,000.

An $865,709 grant REDI grant will pay for the installation of sheet pile along the riverside of the existing boardwalk with a concrete cap, which will help the shoreline to prevent further erosion. The local share of the cost will be $46,264. This project will also include the replacement of the steel post and ring anchoring system for all floating docks in the project area. This will allow the docks to be tethered so they can move according to the water level or ice formations.

A $4.6 million REDI grant will raise the grade within Morrisette Park landward of the concrete floodwall. This would require the demolition of the paved turnaround, sidewalks, tennis courts and playground. Interior grading would extend to Riverside Avenue at a 1 percent slope. The impacted structures would be rebuilt in alternative locations to decrease impacts of the flooding. The local contribution for this project would be $243,750.

A $503,500 REDI grant will extend rip rap and vegetation along the shoreline to help provide a more stable and resilient shoreline. Rip rap is stone used to prevent erosion due to high water and fast current in the St. Lawrence River. The stone would match the existing rip rap as best as possible. In some areas, nature-based sill will be used to stop erosion, to provide a stable and natural look and allow for additional wildlife habitat.

To move forward, the city must establish a lead agency for the project, which will likely be the city, with the planners handling the brunt of the work. A State Environmental Quality Review must also be conducted. Smith told council she did not expect any significant environmental impacts related to the projects.