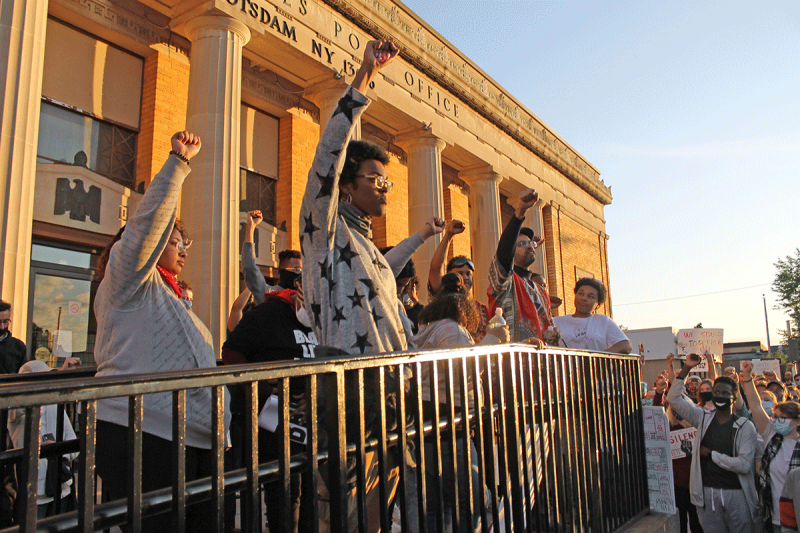 Organizers of Monday's march and speakers raise their fists, intended as a symbol of strength, unity and resistance. NCNow photo by Andy Gardner. More photos from the event are posted at the end of this article.

POTSDAM -- Racial justice protesters returned to downtown Potsdam for a second rally in two days, this one drawing about 1,000 supporters that marched several miles through the village on the evening on Monday, June 1, then rallied on Elm Street.

The demonstrators marched through Potsdam chanting the slogans of today’s civil rights activism - “Black lives matter,” “I can’t breathe” and others.

The crowd then filled the entire area in front of the Post Office, extending down Elm Street to the Potsdam police station, with some having to stand in the shoulder, and others on the north side of the street. Potsdam Police were there to direct traffic around the group, and Potsdam Rescue was also there. Many passersby honked their horns and waved in support as they passed both the event and march. 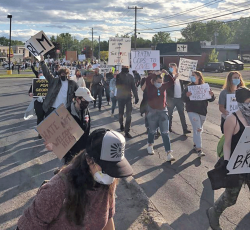 Nearly all of the attendees at both Monday’s rally, and also the one on Sunday, wore facemasks to mitigate potential spread of the coronavirus.

The rally was in response to the killing of George Floyd. The 46-year-old black man died last week after former Minneapolis police officer Derek Chauvin, who is white and was a cop at the time, was filmed using his knee to pin Floyd to the ground for nearly nine minutes while Floyd said “I can’t breathe.”

Monday’s rally featured many speakers talking about racism and police brutality, similar to the previous day. However, at the Monday event, speakers had to stand on the Post Office steps and use a megaphone in order to be heard by everyone there. A video showing part of the demonstration is here.

One of the speakers, SUNY Potsdam Prof. Dr. John Youngblood, spoke and said he was stunned by the show of support for racial justice. By this point, at least 500 of the protesters remained to listen to speeches.

"I have seen people dealing with all types of racism and hatred and disrespect … and never had I imagined there would be a crowd like this to turn out on these issues,” he said. "What you are demonstrating right now is something that is almost hard to believe in anymore, and that is the ability to touch people, to empathize with people, to relate to people, to try and change the system that needs to be changed and you're out here being a part of that change you wish to see. I'm so pleased.”

In 2015, demonstrators held a Black Lives Matter rally in downtown Potsdam after Youngblood, who is black and a member of the LGBTQ community, had been the target of racist and homophobic death threats on the SUNY Potsdam campus. The incident drew an FBI investigation and later resulted in an arrest.

Many of the protest speakers were young, but they ranged in age from adolescents up to middle-aged adults. One of them, a 12-year-old girl, spoke and broke into tears while talking about the racism she deals with at school from her classmates.

Another speaker, Alayna Abelard, talked about the impact on students of color when white classmates display the Confederate flag at school. White supremacist groups often use the Confederate flag as a symbol. Some who display it claim it’s a symbol of southern heritage instead of racism. Many Americans, both people of color and also a growing number of white people, don’t see it that way. They see it as symbolic of a culture determined to hold on to slavery and racial injustice.

Confederate flag opponents often point to the so-called “Cornerstone Speech.” Confederate Vice President Alexander H. Stephens gave the speech just before the start of the Civil War in 1861 where he laid out the rationale for seceding from the Union. He is quoted having said, “[I]ts foundations are laid, its cornerstone rests upon the great truth, that the negro is not equal to the white man; that slavery—subordination to the superior race—is his natural and normal condition. This, our new government, is the first, in the history of the world, based upon this great physical, philosophical, and moral truth,” according to Wikipedia. The Wikipedia page cites for that quote the book "Alexander H. Stephens of Georgia: A Biography," by Thomas E. Schott (1996), page 334. The speech contains numerous other times where Stephens argues that black people are inferior to white people.

"Some people like to flash it around school. How many times have y'all seen a Confederate flag?" Abelard asked the crowd, with many yelling back “Too many!” People of color who spoke at the previous day’s rally also discussed the pain they feel when they see the flag displayed.

Toward the end of the Monday night rally, the entire crowd recognized nine minutes of silence in honor of George Floyd, with the large majority taking a knee and several standing quietly.

“Nine minutes is all it took. You can change a life in a second,” a speaker said from the Post Office steps prior to the nine silent minutes.

Taking a knee became symbolic of racial justice activism in 2016. That’s when former NFL quarterback Colin Kaepernick began taking a knee during the national anthem as a symbolic gesture.

After the nine minutes of silence, the protest leaders asked all of the white attendees to stand in a group in front of the group of black attendees, so the white group was acting as a barrier for the black participants. Although the event was peaceful, the symbol of white protesters standing between police and black protesters has become a repeated gesture at protests around the country in response to Floyd’s death.

“Do we have a reason to feel safe now?” protest organizer Jenn Bidwell asked the white demonstrators, who loudly replied “yes.”

Bidwell then asked the same question to the three white police officers.

“Potsdam PD, do we have a reason to feel safer now?” she said.

One of the officers, Sgt. Corbin Gates-Schult spoke up and said “yes.”

She then turned to the black and brown protesters and asked them to be patient with white people who may be well-intentioned, but still aren’t quite caught up on the nuances of race relations. She cited as an example a white friend who used the term “boy” when talking to a black person. She said her friend was called out for being racist but didn’t understand that the term has been used by white people to disrespect black people going back generations.

“Explain to them how it affects you,” Bidwell said. “Try.”

The rally ended with a candlelight vigil. About 150 or so people remained while a pastor said a prayer for racial justice and harmony, and then many of the demonstrators left their candles in front of a painting of George Floyd that was positioned against a light pole. Gates-Schultz, along with officers Stephen Davis II and Shawn Pulver held candles along with the crowd during the vigil.

The crowd then slowly dispersed, remaining peaceful throughout the entire event. 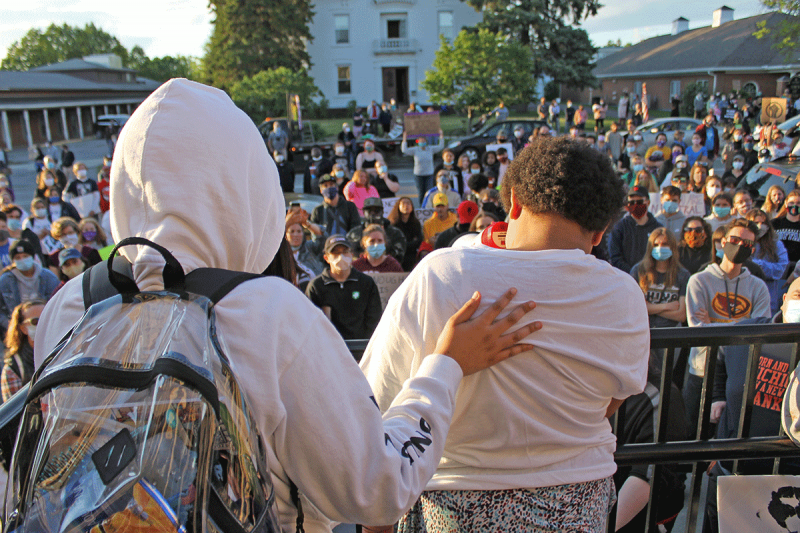 A 12-year-old girl is comforted after breaking into tears while talking about the racism she experiences at school. NCNow photo. 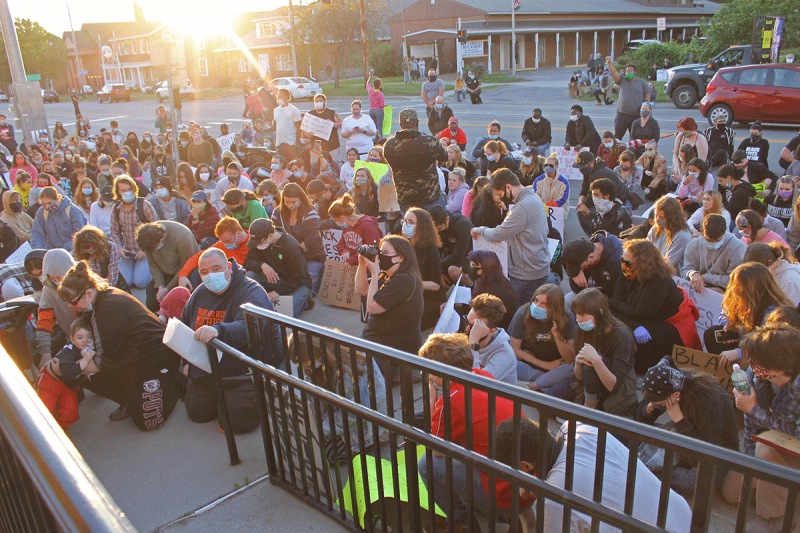 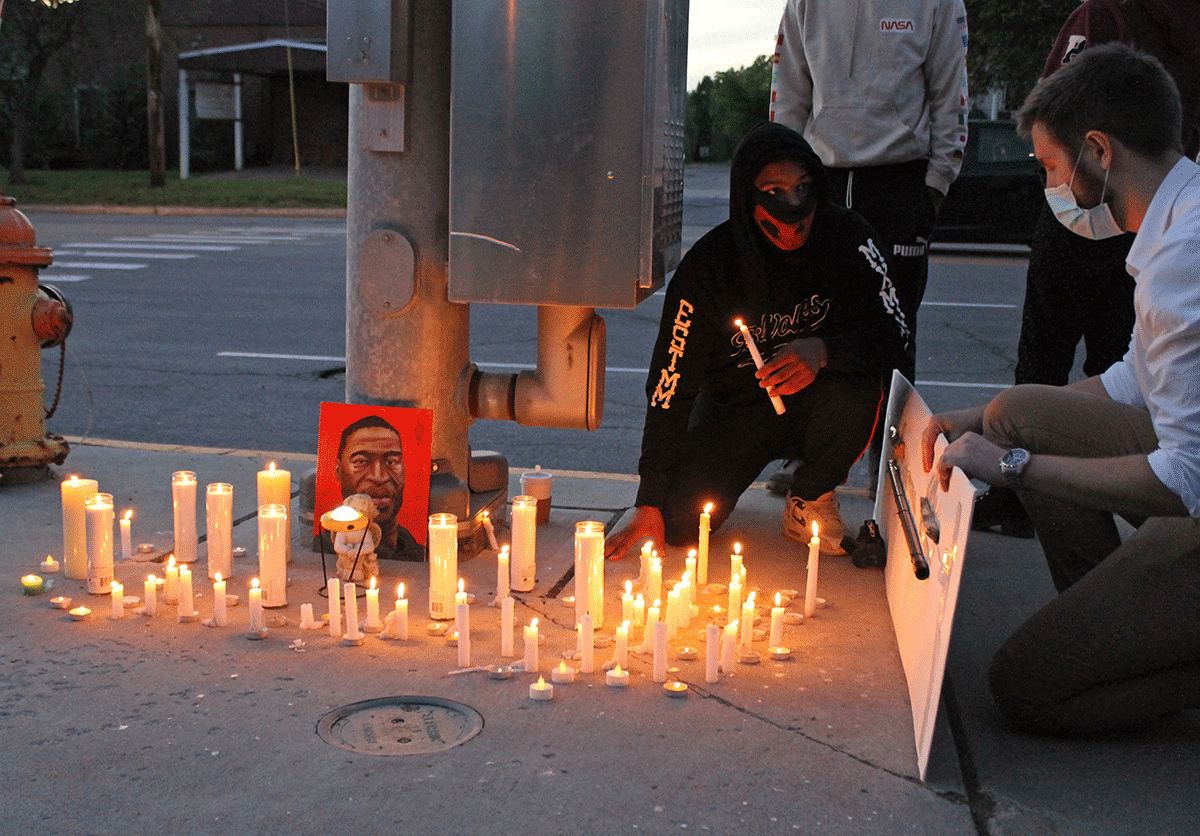 Jason Deshane of Potsdam blocks the wind while Bryan Copeland of Potsdam relights candles that had been blown out. NCNow photo. 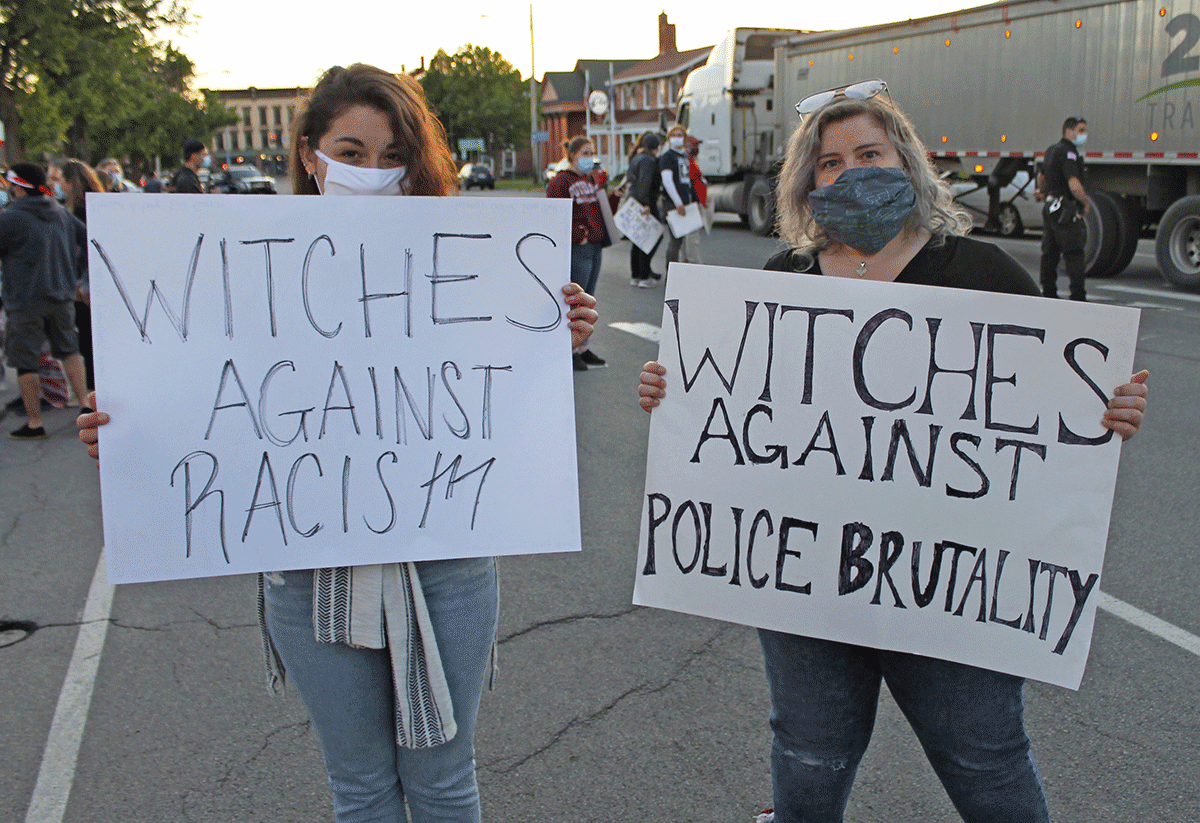 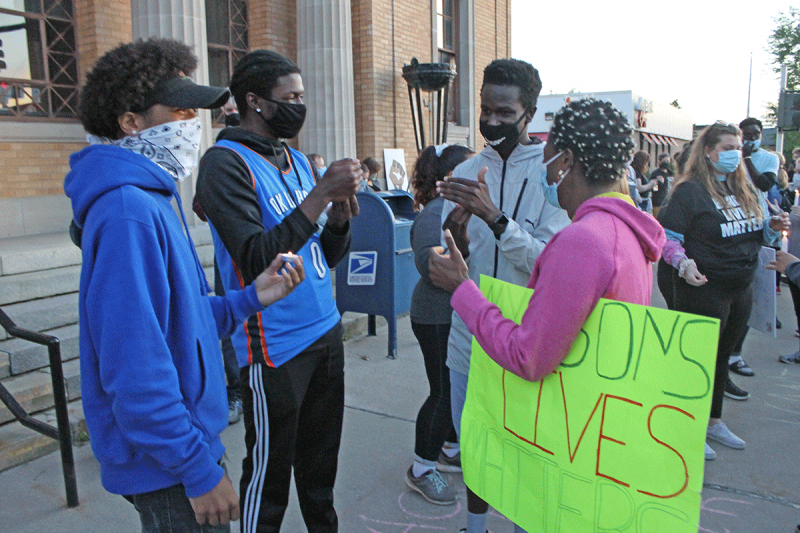 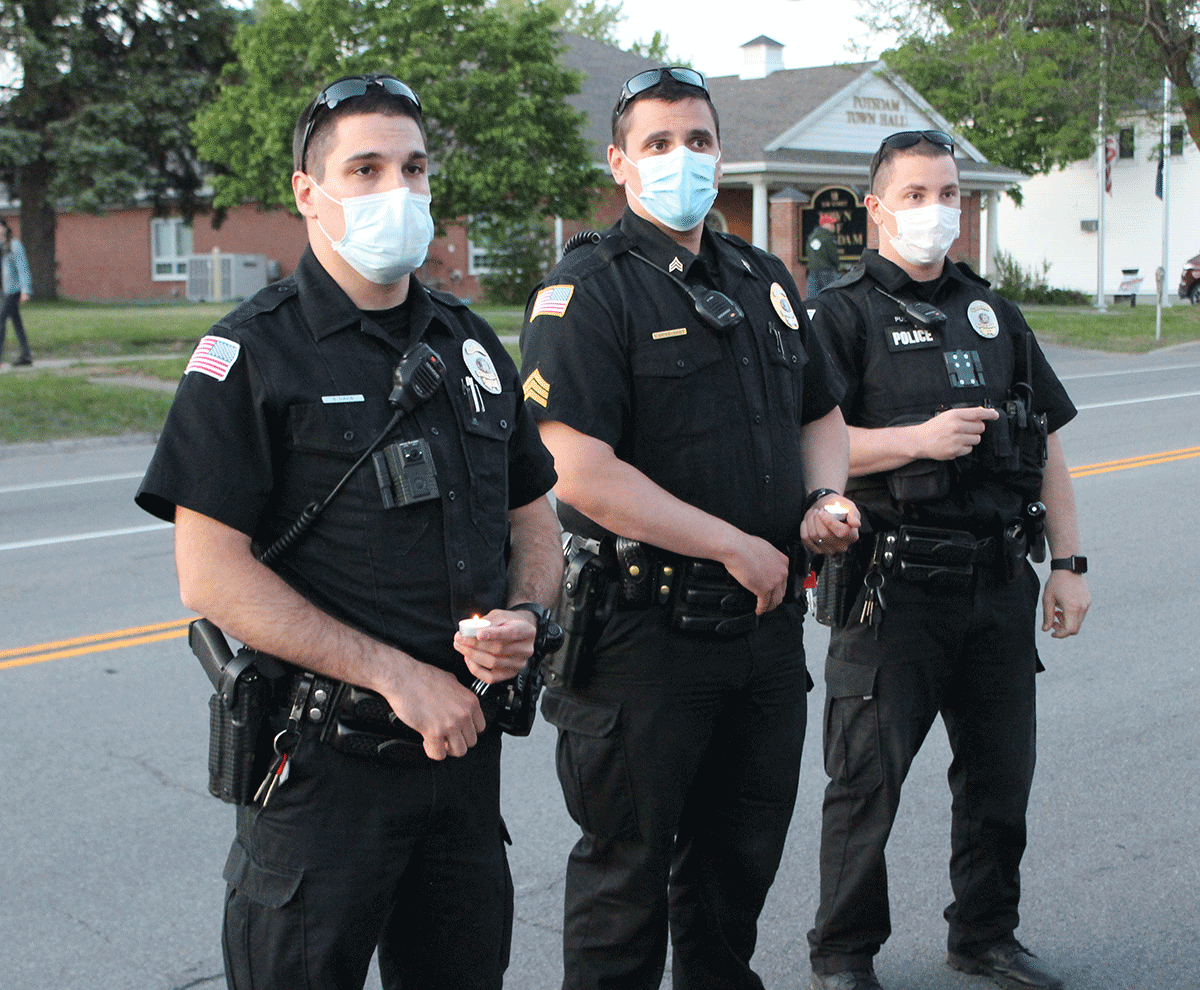