Ramsdell promoted to professor of Physics at Clarkson University

Clarkson University President Tony Collins has announced that Michael Ramsdell has been promoted from associate professor to professor of Physics in the School of Arts & Sciences and the Institute for STEM Education. He is also the Director of First-Year Physics. 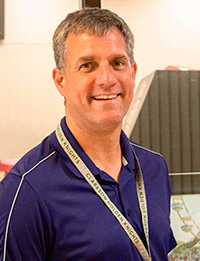 Michael RamsdellRamsdell joined Clarkson’s Department of Physics as a faculty member after receiving his Ph.D. in physics from Clarkson in 2004.

His research in physics education focuses on investigating the methods used in teaching physics and ways to improve those strategies. He has worked on the design, development, and assessment of research experiences in the laboratory, interactive lecture strategies, STEM outreach programs, and effective retention strategies.

He has co-authored eleven peer-reviewed journal articles and given more than 25 talks at national and international conferences. He is the research director for the McNair and CUPO undergraduate summer research program, and serves on Clarkson’s first year council and retention committees.

He teaches large sections of the physics sequence and has developed the Team Design Physics labs, which provide simulated research experiences for students in their first year at college. For his commitment to education, he has received Clarkson’s Outstanding New Teacher Award and has been inducted into Clarkson’s Phalanx honorary leadership society.

Ramsdell has been involved in grants from the National Science Foundation, New York State Education Department, and private foundations that have brought well over $3 million to the North Country. He was inducted into Clarkson’s Million Dollar Club for the significant amounts of external funding that their investigations and research activities have garnered.