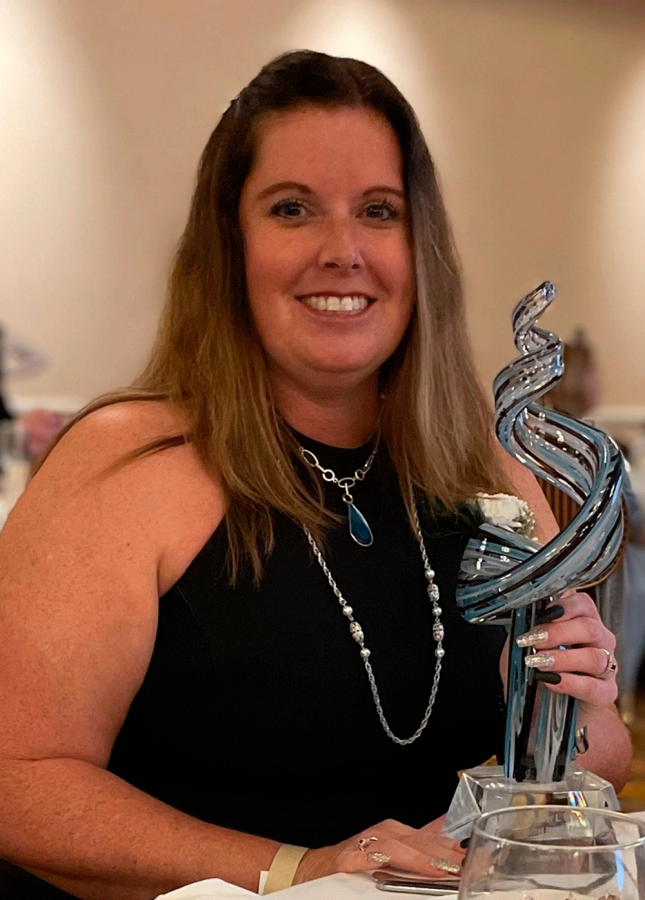 Jennifer Gravelle, a 1997 graduate of Norwood-Norfolk Central School, is the recipient of the Catskill Zone for Adapted Physical Education Teacher of the Year for New York State. Submitted Photo.

A 1997 graduate of Norwood-Norfolk Central School is the recipient of a prestigious Teacher of the Year award.

In March, Jennifer Gravelle accepted a nomination from the Catskill Zone for Adapted Physical Education Teacher of the Year for New York State.

“I then had to collect three letters of recommendation and complete a professional portfolio, resume and extensive essay, basically a thesis, on my how's, my whys and my teaching practices.” noted Gravelle. “In late July, I received a phone call from the state saying my "application" had gone to executive committee and was voted on as the 2022 Adapted PE Teacher of the Year.”

Earlier this month she received the award and attended a ceremony with her mother Jeannette, significant other Josh Lazaro, sister Kim Smith and niece Claire, along with several co-workers. The annual New York State Association of Health, Physical Education, Recreation and Dance conference was held at the Turning Stone Resort and Conference Center.

Gravelle is the daughter of Jeannette Gravelle and the late Lee Gravelle of Norwood. She is a 2001 graduate of SUNY Brockport with a degree in physical education. She earned her master’s degree from SUNY New Paltz in 2007.

Gravelle was hired by the Wallkill Central School District in 2002. She spent 16 years at Plattekill Elementary and then was transferred to the high school five years ago.

Gravelle noted that she just completed her 60th consecutive varsity season - 12 fall seasons coaching varsity soccer (2003-2014), 8 fall seasons in varsity tennis (2015--present); and the winter season from 2002 to the present and spring season 2003 to the present for indoor and outdoor track and field

She has completed the Boston Marathon four times.

In 2018, Gravelle received a smaller award at the State Conference - Catskill Zone's Most Amazing Person Award.

“This award paved the way for the nomination for Teacher of Year,” she remarked.

In 2019, she received the Bleed Panther Blue award for consecutive coaching seasons/success from Wallkill school district.

Gravelle did her student teaching in the fall of 2001 at Ogdensburg Free Academy under the tutelage of long-time physical education teacher and coach Penny Sharrow.