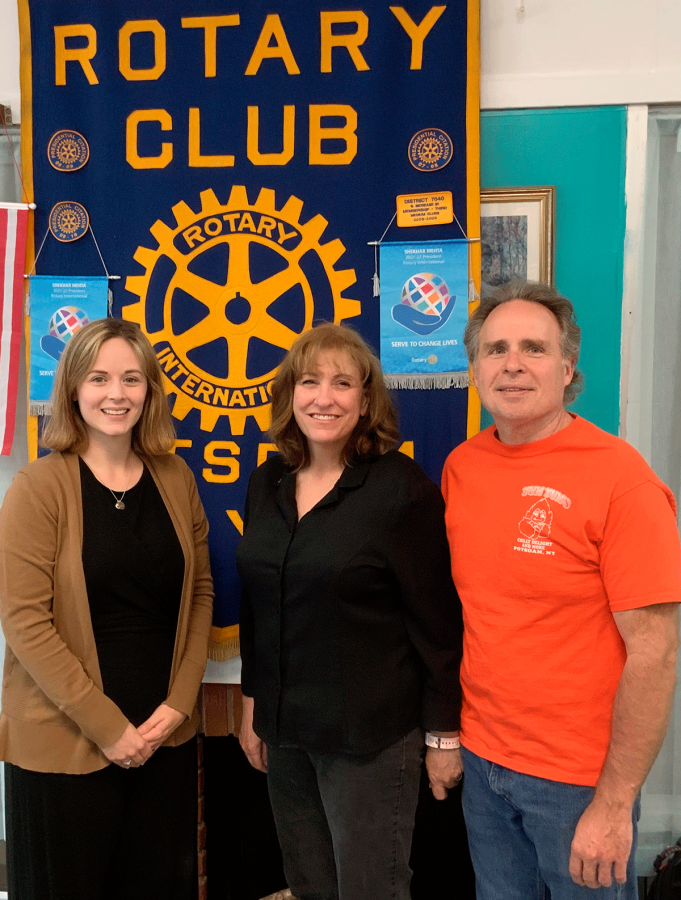 From left to righty are President Taylor Robertson, Pelkey, and her new member sponsor and husband, Duane Pelkey.

POTSDAM - Laurean Connors Pelkey of Madrid was recently inducted as a member of the Rotary Club of Potsdam.

Pelkey grew up in Rush, N.Y., the seventh of nine children. She graduated from Rush-Henrietta High School in 1982 and worked in a variety of jobs. She then attended SUNY Potsdam, where she met her husband-to-be, Duane M. Pelkey, and received a bachelor of arts degree in biology in 1988 and completed a master of science in teaching in 1991.

She married Duane in 1989 and they had three children, Connor, 31, Emily, 21 and Derek, 18. Supporting her husband's career, Pelkey lived in Watertown, Kirkwood, and Freeville, N.Y., usually working in hospitals as a monitor technician. They lived in Spencer, N.Y., for nine years, where she worked for a printing company, health insurance company and the Post Office, and then became a stay-at-home mom for her two youngest children.

She and her family moved to Madrid in 2005, where she became involved in the town’s library board, promoting literacy and helping to write several grants restoring the library building.

Once her children were of school age, Pelkey took up teaching again as a Massena High School science teacher for two years. She also co-coached several Odyssey of the Mind teams at Madrid-Waddington School, where one team made it to the state competition level.

Now, Pelkey, along with her husband, has been co-owner of Yum Yum’s Chilly Delight and Scoops in Potsdam, since 2017.

Rotary's motto, "Service Above Self," exemplifies its humanitarian spirit. Strong fellowship among Rotarians, and meaningful community and international service projects, characterize Rotary worldwide. Rotarians' projects focus on health and hunger, literacy, clean water and the environment, and the eradication of polio.

The Potsdam Rotary Club was established in 1928. Today it continues a long tradition of performing hands-on service projects and fund-raising for local, regional, and international causes. In short, Rotary is about sharing, serving, and having fun!

The Potsdam Rotary Club meets each Wednesday at noon at Yum Yum's Chilly Delight in Potsdam and online. Guests are welcome.