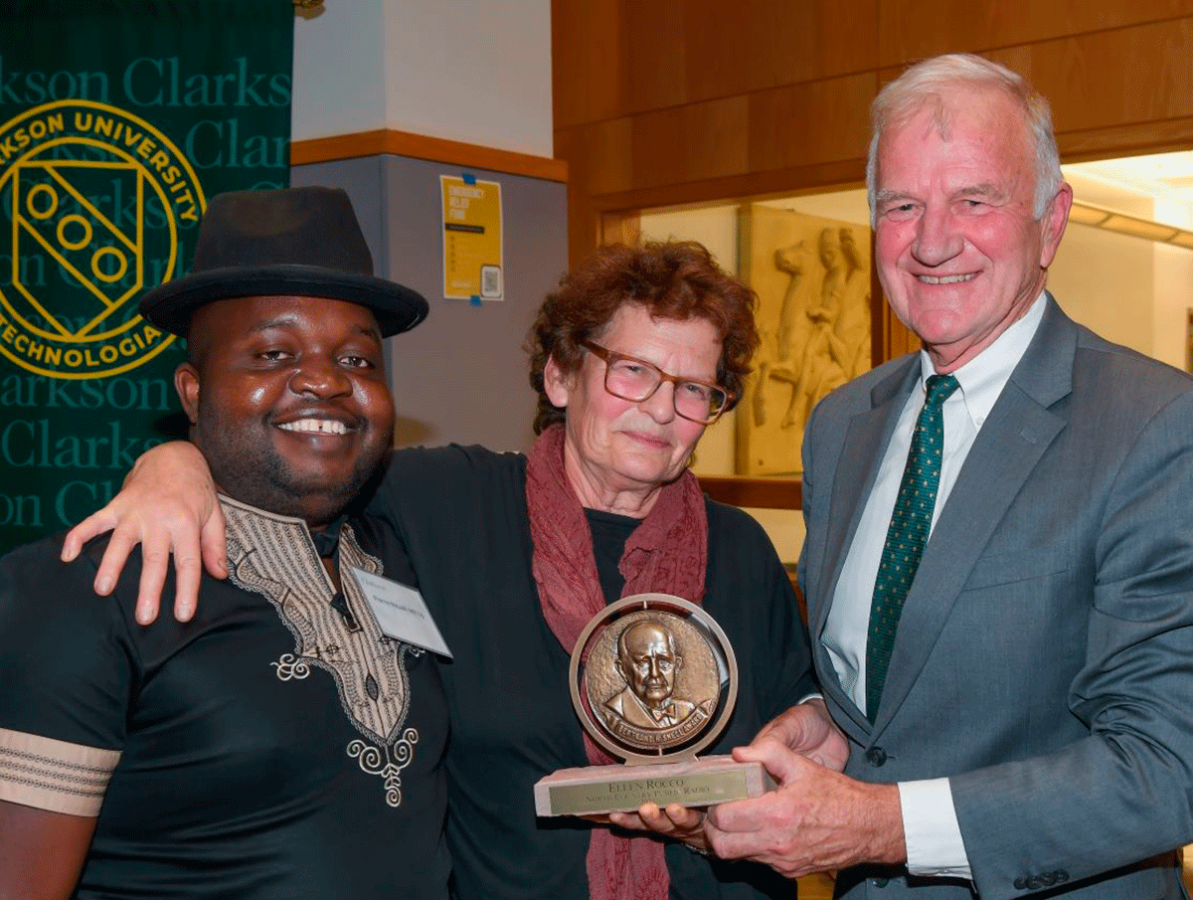 A native of Manhattan, NY, Rocco earned a bachelor’s degree in political science from the City College of New York. She was active in the civil rights and peace movements of the 1960s. In 1971, Rocco moved to St. Lawrence County and purchased Red Truck Farms, selling hay, gardening and raising sheep and horses.

During the late 1960s and through the 1970s, she worked a variety of jobs, including time as an arts organization administrator, a social services caseworker, a bartender and waitress, a substitute teacher, a community organizer, an editorial assistant at Rootdrinker magazine and a columnist for the Gouverneur Tribune Press.

Rocco has had an indelible impact on local, state and national public radio. She began as development director at NCPR (then known as WSLU) in 1980 and was promoted to station manager in 1985. During her nearly 35-year tenure in that position, the station grew from serving only St. Lawrence County to reaching a third of New York State through a network of more 30 transmitters. Twice a finalist, Rocco’s “North Country at Work” project won the Current’s Local that Works contest. The station has been recognized regularly as a leader in public journalism and digital innovation.

“Ellen Rocco’s commitment to honesty and her aspiration to maintain the highest journalistic standards through public radio exemplifies the principles on which the Bertrand H. Snell Award for Community Service was founded,” said Tony Collins, President of Clarkson University. “Her professional success, along with her dedication to enhancing the lives of the residents of the North Country, are a testament to Ellen’s drive and compassion. Her impact will be felt by generations of citizens of the region.”

She has been active within the community and with numerous professional affiliations. Rocco served on the board of National Public Radio and the board of the New York Council for the Humanities. She sat on advisory panels for the Corporation for Public Broadcasting, her local school board and on various local arts and economic boards and panels. She is dedicated to improving the future for the flora, fauna, communities and people of the Adirondacks as a current board member of the Cloudsplitter Foundation.

Rocco along with Garry F. Douglas, long-time President and CEO of the North Country Chamber of Commerce; Kate Fish, retired executive director of the Adirondack North Country Association (ANCA); Betty Little, former New York State Senator; and the St. Lawrence County Public Health Department, including former Director Dana McGuire and Interim Director Jolene Munger were honored at a ceremony during dinner with the Board of Trustees on October 15 in the Caporali Atrium in Snell Hall on Clarkson University’s Hill Campus. The Bertrand H. Snell award honors Congressman Snell's service to the community, Clarkson and the nation. It was created by the University's Board of Trustees in 1981 to assure the remembrance of Clarkson’s patron while recognizing a new generation of leaders who share his commitment to the University's greater community. Recipients of the award are chosen for their professional, business or educational accomplishments, combined with demonstrated integrity and concern for the community. To learn more about past award recipients, click here: https://www.clarkson.edu/snellaward