Clarkson professor recognized for 50 years of service to ACS

POTSDAM -- Clarkson Research Professor Dana Barry, Canton, has been honored for her 50 years of dedication and service to the American Chemical Society (ACS).
Dr. Barry is a research professor in Clarkson’s Department of Electrical & Computer Engineering. She has been a member of the ACS, which is one of the world’s largest scientific organizations, for 50 years.
Barry has served as secretary for the Northern New York Section of the American Chemical Society for 25 years and as coordinator for both National Chemistry Week and Earth Week for more than 10 consecutive years. She is also a Chemistry Ambassador for the society.
Barry received the Local ACS Section’s Outstanding Achievement Award in 2002 and its Outstanding Volunteer of the Year Award in 2017. Her international program for promoting chemistry in the United States, Japan, and Malaysia won the American Chemical Society’s National Chem Luminary Award for Public Relations in 2003.
She organized the Science Education Symposiums for NERM (Northeast Regional Meeting for the American Chemical Society) at Clarkson University and for NERM at SUNY Potsdam, where she was an invited speaker.
She has many honors to her name, five graduate degrees, and over 300 academic/professional publications. Her work is published in the United States, Japan, England, Malaysia, China, India, and other countries. In addition to her position at Clarkson, Barry serves as a professor and scientific board president for Ansted University, and as an instructional support assistant at SUNY Canton.

Photo below: Chair of the Northern New York Section of the ACS, Professor Fadi Bou-Abdallah, chemistry professor at SUNY Potsdam, presents an award to Clarkson Research Professor Dana Barry for her 50 years of service to the American Chemical Society. 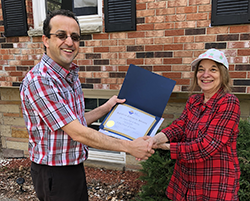