Vivian Coburn, an eighth grader at Canton Central School, has been selected as a winner in the fourth annual Community Spirit Youth Giving Challenge.

This program, sponsored by Northern New York Community Foundation donors, with additional support of Community Bank, N.A. and an anonymous generous donor, asked 7th and 8th grade students in Jefferson, Lewis and St. Lawrence counties to consider what "community" means to them and suggest a nonprofit organization that they felt would best support their vision for a better community.

Coburn’s is just one of 20 winners chosen out of 144 submissions. As a result of her being selected as a winner, a $500 grant will be awarded to the charity of her choice, Help Sami Kick Cancer.

The Help Sami Kick Cancer Foundation is humbled by the continuing support from the Canton community, particularly its younger members who have stepped up to raise money for the organization.

“We are so appreciative of Vivian supporting us in her submission to the Community Spirit Youth Giving Challenge. So many young people have stepped up to offer their efforts in raising money for our cause, and we love that they feel a connection to us,” said foundation spokesperson Jake Newman. “We know that with young people like Vivian being so active in their community that Canton, and our foundation’s place in it, is in great hands.” 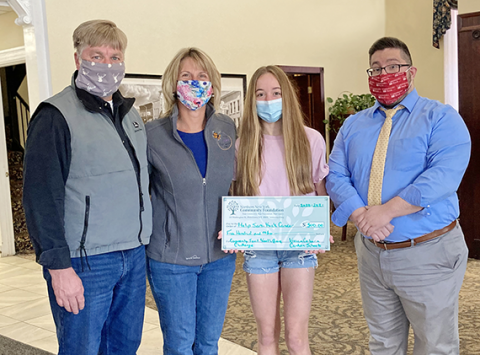