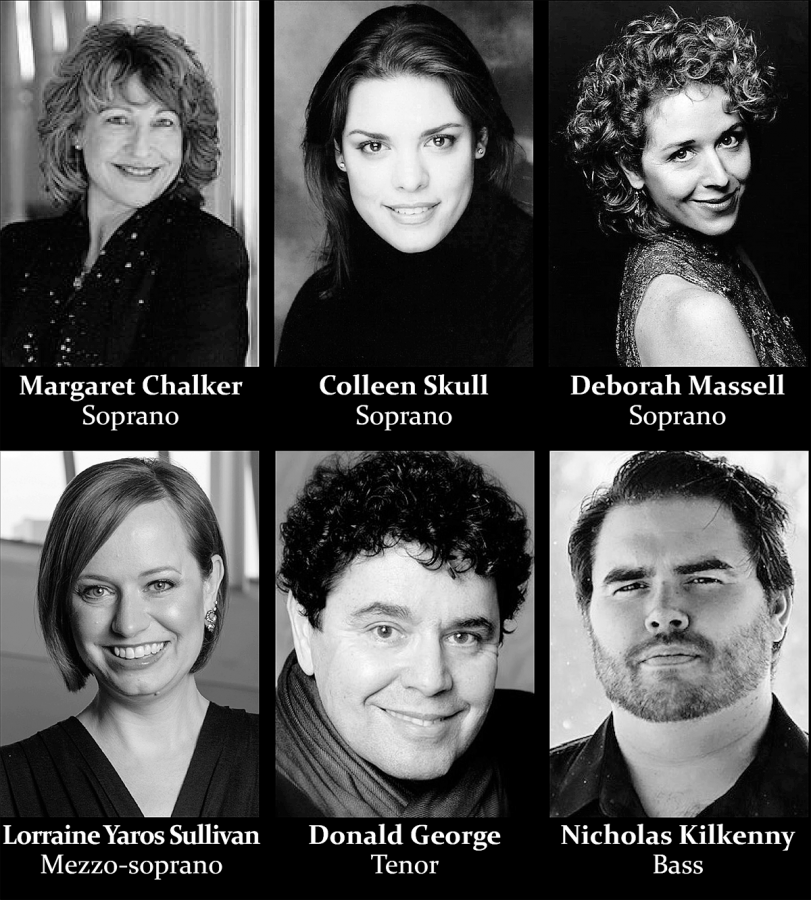 Crane School of Music faculty members pictured above will be the featured soloists at two upcoming concerts opening the Orchestra of Northern New York’s 32nd season. Photo submitted by ONNY.

POTSDAM – Six members of the Crane School of Music Voice Faculty will be front and center, performing arias, duets and ensemble pieces when the Orchestra of Northern New York opens its 32nd season at 7:30 p.m., Aug. 24 at the Clayton Opera House and at 3 p.m., Aug. 25 at Hosmer Hall, SUNY Potsdam.

ONNY founder, music director and conductor Kenneth Andrews will lead the 60-piece professional orchestra, which has been in residence at the Crane School of Music since 1988, in works by Rossini, Verdi, Puccini, Mozart, Bizet, Wagner, Rodgers and Hammerstein, and other composers.

The Clayton concert is sponsored by the Sidney T. Cox Memorial Fund of the Northern New York Community Foundation. Sponsors for the Potsdam concert include SUNY Potsdam and the Crane School of Music, the New York State Council on the Arts, the Northern New York Community Foundation, the Watertown Daily Times, WWNY-TV 7/FOX 28/ME TV and CoBank, Denver known locally as Farm Credit East, Potsdam.

Margaret Chalker’s career spans over 40 years, singing with many U.S. opera companies and orchestras, and an early stint as voice professor at SUNY Fredonia before moving to Europe. The bulk of her opera career took place in Germany and Switzerland, where she was a soloist with the acclaimed Opernhaus Zürich for 25 years. She can be heard on numerous recordings, including the Seattle Symphony’s recording of Mendelssohn’s Symphony 2.

Nicholas Kilkenny is a classical vocalist and voice professor. Being a versatile performer, Mr. Kilkenny has performed in operas around the northeast region of the United States. He earned his Doctor of Musical Arts and Master of Music degrees from the Eastman School of Music and Bachelor of Music Education degree from SUNY Buffalo State College. In May 2014, Nicholas made his Carnegie Hall debut singing the role of Jewel Scrooby in Howard Hanson's Merry Mount with the Rochester Philharmonic Orchestra.

Deborah Massell has performed throughout Europe and North America appearing in leading operatic roles. She has sung in acclaimed venues such as the Hamburg State Opera, the United Nations, Basel Opera, and the Metropolitan Museum of Art, to name just a few. Ms. Massell holds degrees from Hamilton College, The Mannes College of Music, and The University of Montreal. She brought the Metropolitan Opera Live in HD to the Roxy Theater in Potsdam.

Colleen Skull has performed with Canada's leading orchestras in over 30 operatic roles at venues including the Canadian Opera Company, Pacific Opera Victoria, Manitoba Opera, Esprit Orchestra, the Toronto Symphony Orchestra, Winnipeg Symphony, and many others. Radio and television appearances include performances on CBC Radio, CTV, Definitely Not the Opera with Sook-Yin Lee, Breakfast Television, TVO, and YTV.

Lorraine Yaros Sullivan is active in opera, oratorio, chamber music, and art song. She was a featured soloist at the Kennedy Center’s Terrace Theatre and gave a series of recitals in Taiwan, performing American art song and musical theatre. She recently premiered workshop performances of operas by Tom Cipullo, Lori Laitman, and Anthony Davis.