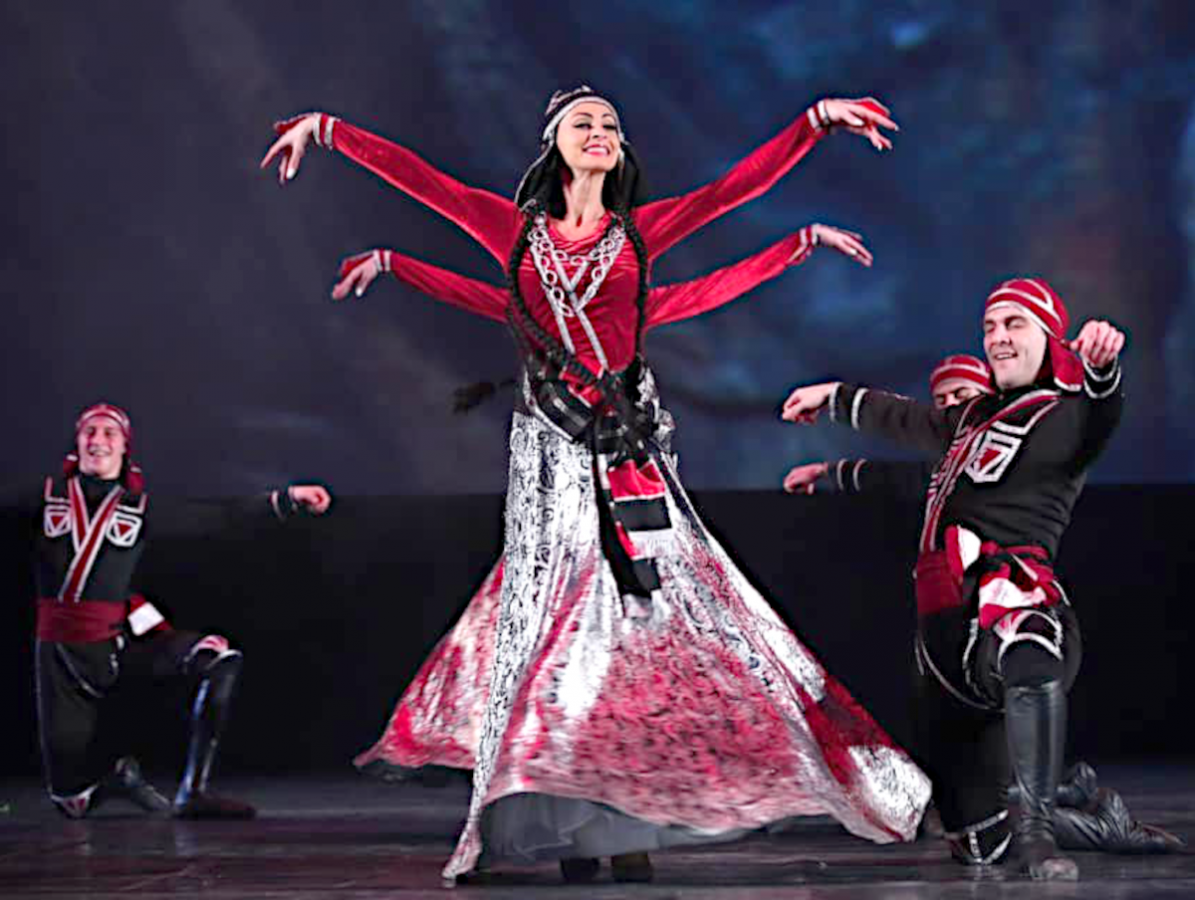 Performers in a routine from “Fire of Georgia” which will hit the Ogdensburg Command Performances stage Tuesday, April 4, 2023, featuring the Royal National Ballet Company of Georgia. OCP photo.

“The Highwaymen Show is a tribute show that gets rave reviews everywhere it plays across the country and is definitely in our north country wheelhouse,” said OCP Administrator Sally F. Palao. “The combined writing and musical talents of Willie, Johnny, Waylon and Kris really come to life in this multi-media production. We thought it would be a great way to kick off our 60th Anniversary season.”

There are a total of six shows in the upcoming 2022-23 lineup, which OCP officials are touting as “A Season for Everyone,” according to Mrs. Palao.

She says the performances for this year’s 60th anniversary milestone were selected with the goal of bringing drama, comedy, dance, and music to the region that will appeal to both older and younger north country patrons.”

“Sixty-years of bringing professional performance art to the region is a long time and it’s something that Ogdensburg Command Performances is very proud of being able to accomplish,” said Mrs. Palao. “With that said, we have a great deal of experience and I honestly think this year’s lineup is going to be well-received, entertaining and fun.”

Other shows expected to be crowd pleasers during the upcoming season include a new adaptation of the Charles Dickens classic “A Christmas Carol” on Dec. 15 at 6:45 p.m., and a performance of the Aretha Franklin tribute “R.E.S.P.E.C.T.” on March 10 at 7:45 p.m., according to Mrs. Palao.

“All of these shows bring something unique, whether it’s the biographical nature of Aretha Franklin’s life and musical story, the haunting special effects and lush costumes used to tell a Christmas Carol, or the synthetic ice that will be placed on George Hall stage for ‘Beauty and the Beast,’” said Mrs. Palao. “This going to be a fun and exciting 60th Anniversary Season.”

Ogdensburg Command Performances provides the residents of Northern New York and eastern Ontario with an affordable opportunity to enjoy many of the same performances that are available in metropolitan areas without the expense or travel. Last season, despite social distancing requirements, almost 3,100 theatre-lovers from 72 towns experienced the magic of Command Performances, according to Sally Palao.

​Communities with abundant arts opportunities have higher standards of living, are better able to attract business and industry, and experience stronger economic growth. OCP is very proud of the role it has played in creating a vibrant cultural environment for 60 years.

Here is a more detailed synopsis of the shows included in OCP’s 2022-23 season. All shows take place in the George Hall Auditorium - Ogdensburg Free Academy.

An incredible tribute to the Outlaws of Country Music: Willie Nelson, Johnny Cash, Waylon Jennings, and Kris Kristofferson. Lovers of "Classic Country" don't miss this trip down memory lane with the unforgettable hits of these iconic superstars: Mama Don't Let Your Babies Grow Up to be Cowboys, Always on My Mind, Me & Bobby McGee and many more. Critics: "The entire show will feel like an encore!"

Charles Dickens powerful story has enchanted audiences the world over with its timeless message of redemption. This new adaptation includes beloved traditional carols woven throughout this classic tale that fills the stage with lush costumes, stunning sets, haunting effects, and humor.

Critics: "A spectacular show with a new twist on an old classic!"

• R.E.S.P.E.C.T – Friday, March 10, 2023 | 7:45 p.m. R.E.S.P.E.C.T is Aretha Franklin. You will laugh, cry, and rejoice as we journey through the artist's life - her loves, tragedies, and triumphs. In this immersive show experience, there will not only be songs from the timeless Aretha songbook, but also showcase a woman who tirelessly fought inequality and injustice.

Critics: "The ultimate tribute to the legendary Queen of Soul!"

• Beauty & The Beast On Ice – Wednesday, March 22, 2023 | 6:45 p.m. This original fairy tale is spun with upbeat, modern music, theatrical story lines, and out of this world special effects, all on the stage in George Hall Auditorium. Happiness is founded in virtue...Honesty is always best. Expect to see world champion ice skaters, cirque performers, and live singers bring this beloved tale to life.

Critics: "Magic is alive & memories are made!"

The Royal National Ballet Company of Georgia will tour the USA for the first time after performing throughout the world. Capturing the rich & diverse culture of the Democratic Republic of Georgia, with several hundred magnificent costume changes, the dancers slide as if on wheels in some of the most exciting routines to ever appear on the stage.

Four women at a lingerie sale have nothing in common but a black lace bra, memory loss, hot flashes, night sweats, not enough sex, or too much sex! This hilarious musical, set to classic tunes from the 60s, 70s, and 80s will have you cheering and dancing in the aisles. Over 20 years on tour worldwide and 17 million fans. Critics: "Funny, fresh & simply terrific!"