POTSDAM -- Anchorspace Potsdam, which a news release describes as “the first co-working space in the area,” will open to members and the public in January. 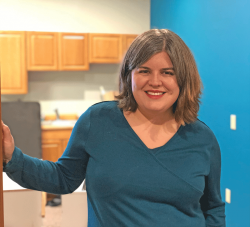 Above is Nicole Ouellette, owner of Anchorspace Potsdam.

The release says Anchorspace Potsdam was conceived when Nicole Ouellette tried to work in Potsdam this past February.

“I just needed a desk with internet. You’d think that was simple. But I called around. I advertised to the local chamber of commerce newsletter. It was ridiculously hard to find dedicated space, even though I was willing to pay,” Ouellette said in a prepared statement. “Snell Hall had one windowless concrete room available to rent at that time… but it was going to take two weeks to hook up internet there, which was half way through my four week stay. I gratefully worked from the basement of the library for a while, but people kept thinking I worked there and would stop by to ask questions. I knew there had to be an easier way.”

Ouellette, who owns an online marketing company, also manages two other “co-working spaces” in Maine and was living in Maine the last two years while dating her Clarkson University boyfriend long distance.

“It was easier for me to get away for periods of time than it was for him so I spent chunks of 2018 in Potsdam,” Ouellette said in the release. “I was looking for workspace and I figured I wasn’t the only one. I started looking at real estate in the Canton-Potsdam area to figure out if a co-working space could work here.”

Anchorspace Potsdam became a reality when Ouellette met Bill Melchior, a local business owner with commercial property. “I knew Bill was going to be great to deal with as a landlord, everyone in town has nothing but good things to say about him. I told Bill I was going to rent a space from him, if I was going to do this at all.”

The final green light was financial. Ouellette had offered in-kind co-working space as part of a 2019 ANAC grant application with the St. Lawrence County Chamber of Commerce. “When the grant was awarded and my in-kind space was officially needed, I knew I had to take the plunge,” she said.

The 71 Market St. location is where the former Clarkson robotics program was housed. The space is open with great natural light and amenities like parking. “They left it in great shape so it’s practically move-in ready.”

Once open, Anchorspace Potsdam will offer drop-in day rates, weekly rates, and conference room rental as well as memberships for more regular space users. “Having more than one location means we can do cool things, like stream workshops and share a multi-state pool of resources,” says Ouellette. “I see the diverse locations in Maine and New York as a strength.”