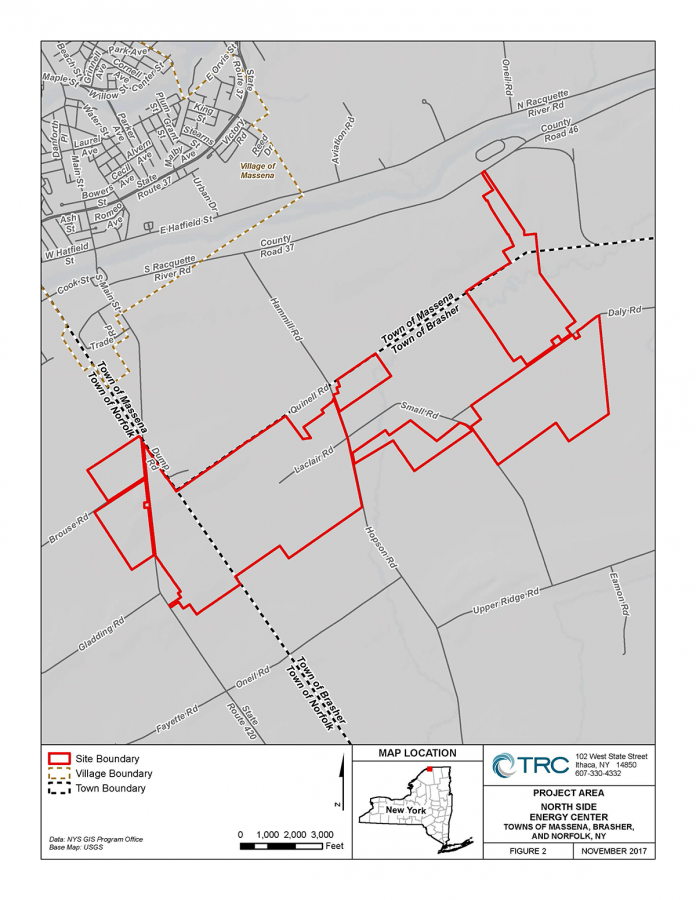 The project area, outlined in red, shows the locations being evaluated for placement of project facilities.
A larger version of the map is here.

North Park Energy is planning a 180-megawatt solar project in Massena, Brasher and Norfolk that would provide hundreds of construction jobs and be operational by 2023. The company submitted a Preliminary Scope Statement (PSS) June 1 which summarizes the studies involved, according Michael Dowling, project coordinator.

The total number of solar panels at the North Side Energy Center is dependent on “how technology improves” and other factors such as the many studies involved, Dowling said. It is expected that the number of panels would be known when the company submits a project design.

The project would be built on 1600-acres of land on Daly Road, Small Road and LaClair Road. It would be constructed on land leased from owners of private property located in the three towns.

Dowling said the majority of the land is already clear and is “pretty well suited for a solar project.”

Governor Cuomo wants New York to produce half of its total power from renewable sources by 2030, and this project would help meet that need.

Construction for the project could begin near the end of 2022 or early 2023.

The farm would include a 230-kV switchyard, which will be transferred to the New York Power Authority to own and operate.

The center would generate enough power for more than 40,000 homes, the company says. They say carbon emissions would be reduced by an average of 150,000 tons annually, which is equivalent to taking more than 30,000 vehicles off the road.

The lifespan of the project is about 30 years, Dowling said. After that, the company would use the decommission plan to either remove the panels, contract with another company to do so or use the land for another opportunity.

“We’re really excited … this is a great project for the area,” Dowling said.

He said the hundreds of construction jobs expected would also benefit the region in other ways, as those workers would be purchasing goods and services locally, helping many businesses. Once complete, one to two people would be employed to run the facility.

The county, towns and schools would benefit financially from the project too. An agreement with the St. Lawrence County Industrial Development Agency (IDA) is expected.

The site could also be used for tours and educational purposes for nearby students to learn about clean, renewable energy, Dowling said.

Studies will include the impacts to the endangered species, habitats, archeological, visual, socio-economic and others.

Dowling said he has built “great relationships” in conversation with local town superintendents. “I am looking forward to working with them.”

The public will get its chance to weigh in on the project at open houses.

Dowling said even with the current restrictions due to COVID-19, the company still plans to hold open houses. “As soon as we are allowed,” he said.

The company sent mailers to every resident within a two-mile radius to get feedback and anyone can leave comments on the company's website, which is www.northsideenergycenter.com/.

Hard copies of the PSS will be available at town halls and libraries in Massena, Brasher Falls and Norfolk.

North Park Energy is seeking authority from the New York State Board of Electric Generation Siting and the Environment to construct the facility as part of the Article 10 process. Article 10 established a process for the siting of electric generating facilities and re-powering projects. As part of the process, a multi-agency state Siting Board is tasked with conducting the permitting process for power plants of 25 megawatts or greater.