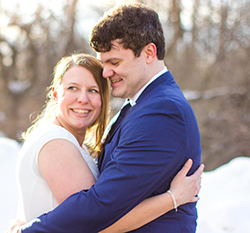 POTSDAM -- Suzanne "Suzy" Elizabeth McBroom and Sean Jeffrey Clemens were married on Saturday, Feb. 20, 2021, at the Potsdam Branch meeting house of The Church of Jesus Christ of Latter-day Saints.

The bride is the daughter of Bill and Joanne Swift of Potsdam. The groom is the son of Glenn and Meg Clemens of Canton.

The wedding was performed by Dale Burnett of Winthrop. The bride's attendants were Laura Clemens, Canton, sister of the groom and the bride's son Liam McBroom. The groom's best man was Kevin Mace, Canton, his best friend. Cristina Fenner of Cristina Fenner Photography took the couples wedding photos.

The couple met at Frazer Computing in Canton where they both were working and grew to know each other during a Dungeons and Dragons campaign. The groom proposed in origami (paper folder sculptures) on Christmas Eve.

Suzy was formerly the executive director of SLC Arts (2014-2019), and holds a master’s in Secondary English from SUNY Potsdam, Class 2003. She is a Potsdam Central graduate and currently works as executive assistant a Frazer Computing.

Sean trained as a mathematician and holds a master's degree in applied mathematics from North Carolina State University and a bachelor's degree from SUNY Potsdam, class of 2008. He is a Canton Central graduate. He is currently employed as a software developer at Frazer Computing.

The couple spent their honeymoon in Saranac Lake, and are residing in Potsdam.