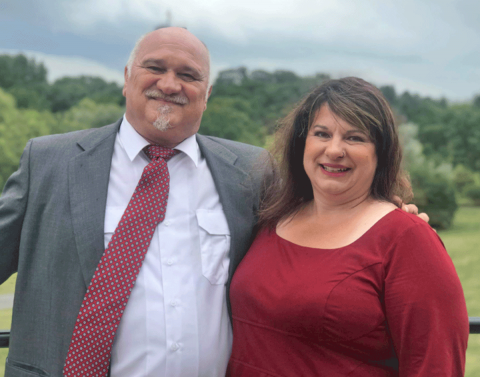 Cole, Hunter, and Kendall DeSantis, along with Nicholas and Katherin Filipchuk, announce the marriage of their parents, Judith Lynn Rheome of Canton, and Timothy Peter Filipchuk of Ottawa. Their parents were married on Saturday, August 17, 2019, in the Hosta Garden of the Dominion Arboretum, Ottawa, by Ministry Support Clergy Shari Rowan.

The bride was escorted by the parents of the groom.

The bride is the daughter of Ida Finley Rheome of Plattsburgh, and the late Corliss "Corky" Rheome, originally of Ogdensburg. The groom is the son of Peter and Anne Filipchuk of Richmond Hill, Ontario.

Best man was Paul Ozorak, friend of the groom.

The couple traveled to Quebec City, and will take a traditional honeymoon to Newfoundland in summer 2020.

The bride attended C.W. Baker High School, Baldwinsville, and graduated with highest honors from SUNY Canton, obtaining a degree in Early Childhood Education. She is a special education paraprofessional at A. A. Kingston Middle School, Potsdam.

The groom attended Langstaff Secondary School in Thornhill, Ontario, and received a degree in Electrical Engineering from George Brown College, Toronto. He retired as Senior Inspector after 33 years with Measurement Canada.

The Filipchuks make their home in Ottawa.