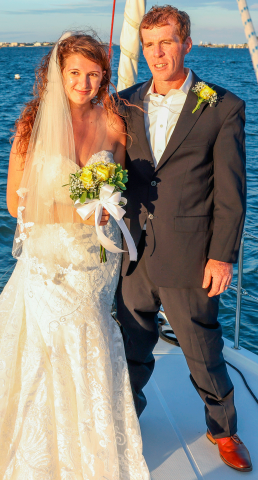 Jessica L. Sheets, daughter of David and Susan Sheets of Lisbon, and Michael R. Martin, son of Mike and Missy Martin of Waddington, and Marc and Jackie Montreuil of Ogdensburg, eloped on Oct. 13 on a private sailboat at sunset in St. Augustine, Fla.

The bride is a 2016 graduate of Madrid-Waddington Central School. He received her NYS Family Peer Advocate credential through Families Together in Albany in 2019. She is currently employed as a psychosocial rehabilitationist for a Crisis and Detox Center, and is also the bookkeeper and dispatcher for Martins Motor Freight.

The groom is also a graduate of Madrid-Waddington Central School. He owns and runs Martins Motor Freight.

After the couple’s elopement, they had dinner on a balcony of a restaurant looking over where they took their vows. The couple stayed at Beacher’s Lodge in St. Augustine, Fla. and Newport Beachside Resort in Sunny Isles, Fla where they spend every day on the beach, rented a jet ski and supercar, watched the new Halloween Kills in a luxury movie theater, as well as explored museums.

The couple held an Edgar Allen Poe and Sylvia Plath themed reception on Oct. 30 when they returned home to celebrate with family in Waddington at the town hall. Musician was Nick Rycroft.

They currently reside in Ogdensburg while in the process of building their new home before moving.