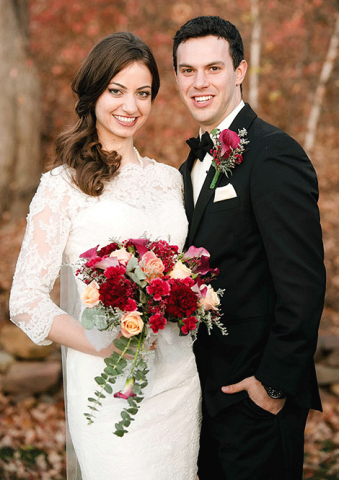 Jennifer Marie Hinrichs and Matthew James Hadfield, both of Forest, VA., and Clarkson University alumni, were married Nov. 12, 2016 at 2 p.m. at the Church of Saint Matthew in Bristol, Conn.

The bride was the fourth generation in her family to be married at the Church of Saint Matthew.

The bride’s parents are John and Kassie Hinrichs of Bristol, Conn.

The groom’s parents are Kevin and Debbie Hadfield of Gouverneur.

The celebrant of the wedding was Monsignor Thomas Ginty.

John Hinrichs, the bride’s father, gave her away in marriage.

Lectors and readers at the ceremony included Sharon Whitney, aunt of the bride, and Kevin Hadfield, father of the groom.

Crista James, friend of the bride, was the matron of honor.

The flower gril was Malayna Hadfield.

Other attendants included Courtney Burke, maid of honor, and Brianne Sterling, bridesmaid, both friends of the bride.

Zachary Wyles, friend of the groom, was the best man.

Groomsmen included Joshua Hinrichs, brother of the bride; and Jacob McCrindle and Gerald Williams, friends of the groom.

Connor Nelson, nephew of the groom, was the ring bearer.

The wedding reception was held at the Avon Old Farms Hotel.

The couple honeymooned in Bali, Indonesia, in December.

The bride graduated from Clarkson University with a bachelor’s degree in global supply chain management and psychology. She works for IBM as a recruitment partner.

The groom graduated from Clarkson University with a bachelor’s degree in biology. He is a third-year medical student at Liberty University.

The bride’s new name will be Jennifer Marie Hadfield.