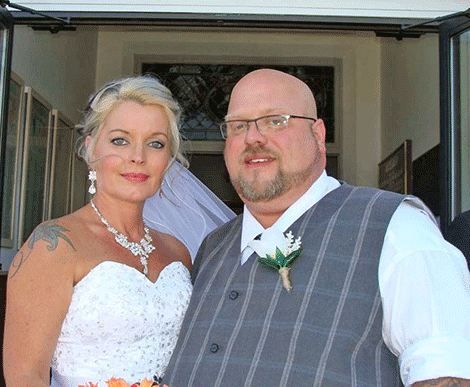 Jennifer Lynne Kench and Richard Allen Bogart of Ogdensburg were married July 21, 2018 at Notre Dame Church in their hometown.

Kench is the daughter of Howard and Alice Kench of Ogdensburg.

Fr. Joseph Morgan performed their ceremony. Howard Kench and her son, Kevin Joanette II, gave away the bride in marriage.

Stacy Bracy, the bride’s niece; Kathy Limoges, the groom’s aunt; and John Walker, the groom’s brother in law, did readings.

Judy Fredericks was the church musician.

Kelly LaRock, a friend of the bride, was maid of honor.

Their reception was at the QWL building in Lisbon. Herb Rushlow and Ashleigh Tebo were their musicians.

The couple plans to honeymoon at Cupsogue Beach in Westhampton, N.Y.

The bride is a medical office receptionist at St. Lawrence Health Alliance.

The groom is a self-employed OTR driver with Lavalle Transportation, Inc.

Jennifer will now use the name Jennifer Lynne Bogart.