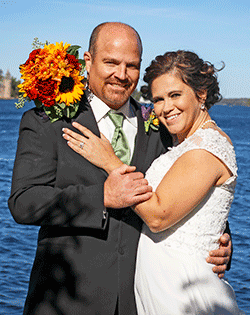 Jennifer Cassar and Dan Roberts, both of Gouverneur, were married Oct. 15, 2016 at 1 p.m. in Alexandria Bay.

Dan is the son of of Dave & Cheryl Roberts of Gouverneur. He is a 1990 graduate of Hermon-DeKalb. He is employed by Viking Cives USA as a painter.

Jennifer is the daughter of Judith Gullion of California and the late Richard Perry. She is a 1987 graduate of Hermon-DeKalb Central Schoo. She is employed as a medical record clerk at Samaritan Medical Center.

The couple was married by Pastor Dave Sheppard, and Jennifer was given away by her father-in-law.

Kim Harris, the bride’s best friend, was maid of honor.

Daughters Brittany and Bridget Rust, and sister-in-laws Rhonda and Brooke Roberts served as bridesmaids. Anniston Roberts, a neice, was the flower girl.

Jace Roberts was the ring bearer.

The reception was held at the Gouverneur VFW post.

The bride will now be known as Jennifer Roberts.