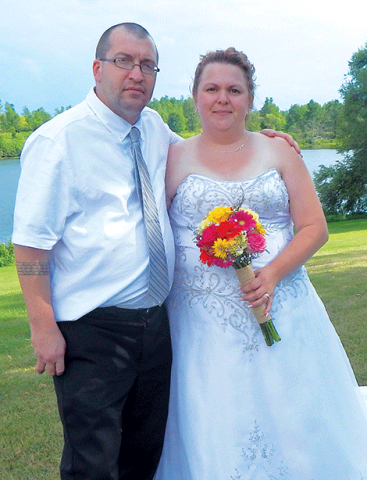 Jacqueline Marie White and Chad Louis Marlow were married Sunday, July 23, 2016 at 2 p.m. at Amvets Post 4, Fregoe Road in Massena. The readings were done by Jeff Grants, friend of the bride and groom.

The bride was escorted to the altar by her father, Reginald White, to Ed Sheeran "Thinking out loud."

Matron of honor was Crystal Barrett, sister of the bride. Bridesmaids were Jalene LaPradd, Evette Gagne and Ashlie Snyder, friends of the bride. Junior bridesmaid was Cheyenne White, and the flower girl was Peyton Barrett, both nieces of the bride.

The best man was Frank Barrett, brother-in-law of the bride, groomsmen were Anthony LaPradd, Ryan Herbstler and Travis Deshane, friends of the groom. Ring bearers were Chad Jr. and Brantley Marlow, sons of bride and groom.

The reception was held at the Amvets Post 4 by the water. The room was decorated with simple flowers and center pieces that the bride and bridesmaids helped make.

The couple plan to take a small honeymoon in late summer 2017.

The name the bride will use henceforth is Jacqueline Marie Marlow.