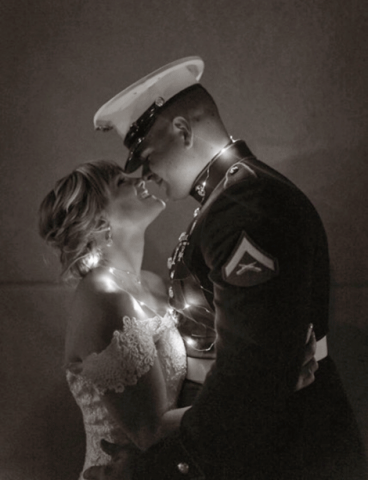 Paul & Gina LaPointe and Candy & Kevin Bates, together with Tom and Linda McCarty, are pleased to announce the marriage of Danielle Louise LaPointe to Kenneth John McCarty on Nov. 4, 2017.

Danielle is the daughter of Paul LaPointe and Candace Bates, both from Potsdam. She graduated from Potsdam Senior High School in 2003 and holds a bachelor’s degree in Spanish and community health from SUNY Potsdam and nutritional science from Kaplan University. She most recently became a health and wellness coach.

Kenneth is the son of Tom and Linda McCarty of Plattsburgh. He attended Plattsburgh schools and graduated in 2012 from Clinton Community College with a liberal arts degree. Kenny is serving the United States Marine Corp as a lance corporal and is stationed at King’s Bay Naval Base.

The wedding took place at Mo’s Pub & Grill in Malone. At 3 p.m., the bride was escorted down the aisle to Dave Matthews’s “Where Are You Going” wearing an off-the-shoulder embroidered lace mermaid gown and golden heels. The bride, and each of her six bridesmaids, held an elegant bouquet of cream roses, red dahlias, and sprigs of eucalyptus. The seven groomsmen displayed corsages of rosemary sprigs and red berry. The groom waited eagerly in his Marine Corp dress blues. After sealing their vows with a kiss, Rush’s “Tom Sawyer” ushered the bride and groom through the applauding crowd.

The bride and groom received toasts from the maid of honor and sister of the bride, Courtney LaPointe, and best man and brother of the groom, T.J. McCarty. The cake, provided by Heidi Haggett of Potsdam, was adorned with intricately sculpted buttercream frosting, burgundy wildflowers, and surrounded by matching cupcakes. The exchange of cake, despite the urging of the guests, was enjoyed quite neatly by the bride and groom.

For the remainder of the night, the Adirondack room of Mo’s was illuminated by stringed lights, candles, and the energy of the crowd on the dance floor.

The happy couple resides in St. Marys, Ga. with their dog, Murphy and their cat, Donovan.