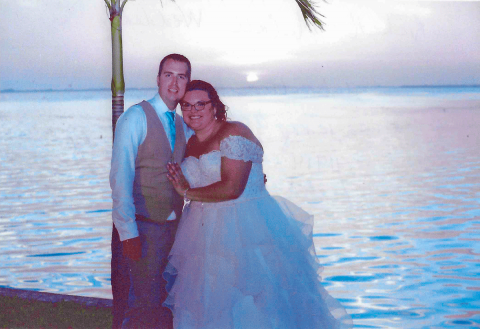 Brittany Alisabethe Rickett and Casey Jordan McCall were married on Saturday, June 22, 2019 at the Powell - Crosley Estate on Sarasota Bay in Sarasota, Fla.

The bride’s matron of honor was her best friend and college sorority sister Kristen Stegville of Nebraska. Bridesmaids were her sorority sisters Dana Vollmuth of North Carolina, Theresa Faughnan of South Carolina, her close friend Tara Simionescu, of St. Petersburg, Fla., and the Groom’s sister Holly Davison of Texas.

Flower girl was Avery Morris, niece of the bride, of Pittsburgh, Penn.

The groom’s dad was his son’s best ,an, Duane McCall, of Colorado. Groomsmen were Garrett Hawley, of Colorado, the bride’s brother Jason Grennon, of New York, Christopher Keene, of Florida, and Ashley Davison, brother-in-law of the groom, of Texas. Usher was Nehemiah Drummond of Florida.

The groom’s nephew’s Bodhe and Becker Davison of Texas were ring bearer’s.

The outdoor ceremony was followed by butlered appetizer’s and then a sit down dinner reception at the Powell - Crosley Estate. Catering was done by Milan Catering of Sarasota.

Cakes By Ron of Sarasota made the cannoli cream and salted caramel wedding cake.

The flowers for the wedding and reception were done by SueEllen’s Floral Boutique of Sarasota.

Music was provided by TLS Entertainment.

Photography was done by Garry and Stacy Photography and videography by Compass Captures.

A special thank you to K. Gasmo Hair and Makeup and The Painted Gate.

Brittany is a 2006 graduate of Massena Central High School and graduated with a bachelor’s segree from SUNY Potsdam. Brittany went on to study for her master’s degree at St. Lawrence University, transferring to Canisius College to receive her master’s in teaching English as a secondary language. Brittany teaches high school Spanish, regular and honors, at Palmetto High School in Palmetto, Fla. She is also a Spanish teacher for the Florida Virtual School as well as doing private tutoring.

Casey attended Pondorosa High School, Parker, Colo. Casey learned his trades thru his dad’s companies in Colorado before moving to Florida. Casey is a welder and fabricator in Sarasota, Fla.

The newlyweds make their home in Palmetto/Bradenton, Fla. with their two fur babies, Dewey and Dayzee.

The couple would like to thank their family and friends for being there for them to celebrate their marriage. An especially big thanks to all those that traveled long distances to share their day with them. More than anything else, the presence of the people that they love most made this a joyous occasion.