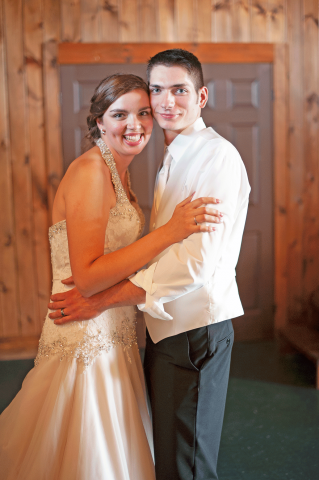 Jay and Janet Livingston are proud to announce the marriage of their daughter Ashley Livingston to Benjamin Budd on June 22, 2019, at 2:30 in the afternoon at the Lisbon Wesleyan Church. Rev. Floyd McCallum officiated at the ceremony.

The bride is the daughter of Jay & Janet Livingston of Lisbon. She graduated from Lisbon Central School and SUNY Canton with a Bachelor of Technology degree in Civil and Environmental Engineering Technology. Ashley is currently employed by NYS Department of Transportation as an Engineer Trainee.

The groom is the son of Richard & Shirley Budd of Brushton. He is a graduate of North Franklin Home Educators and is a 5th year Apprentice Electrician of IBEW Local 910, currently working for T.E.L. Inc., Heuvelton.

Jon Catton and Gideon Vaillancourt, friends of the groom; Patrick Lawton, brother-in-law of the bride; Alan Livingston and Nathan McDonald, cousins of the bride. Ring bearer was Alijah Hendershot, nephew of the bride.

Photographer for the event was Greg Kie of Canton. Floral arrangements were prepared by Waddington Blooms and the wedding cake was made by Cindy’s Cake Shop. Jim Dettmer provided music during the reception which was held at the Freight House in Ogdensburg. Reception assistants were Marc and Rebecca Washburn, friends of the bride and groom.

The couple honeymooned at North Myrtle Beach, South Carolina. Following their honeymoon, they now reside at their new home in Madrid.