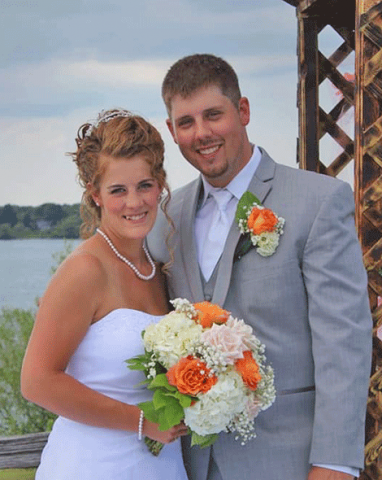 Amber is the daughter of Gerald and Sandy Hollinger of Potsdam and Tina and Christopher Burke of Madrid.

Preston is the son of Ronald and Rosemary Forbes of Potsdam.

They were married in Lisbon with Andrew Miller performing the ceremony.

Maid of honor was Shauna Vallance, a best friend, and matron of honor was Marsha Hollinger, a cousin. Bridesmaids were best friend Maggie Mitchell, the groom's cousin Amanda Bradley and the groom's sister Alicia Forbes. Flower girls were the couple's daughter Caroline and niece Jocelyn.

The matron of honor and best man gave speeches at the reception, which was right after the wedding in the same place. The DJ was Scott Boyer.

The couple plans a fall honeymoon in Florida.

Amber is a Madrid-Waddington graduate and works as a server at Meadow's in Canton.

Preston is a Potsdam Central graduate and also has a degree from Nascar Technical Institute in North Carolina. He works as a mechanic for the Village of Potsdam.

The bride will now use the name Amber Marie Forbes.