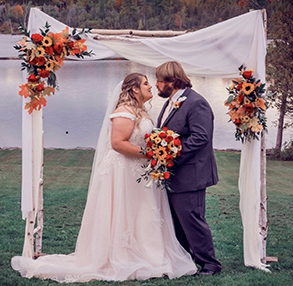 Alicia is the daughter of Rosemary and Ronald Forbes. Christopher is the son of Krista and Karl Kanzebach and Chris Barley.

The service was performed by Judge Jamie Mason.

Groomsmen include Joey Barr, and Preston Forbes, the bride's brother. The ring bearer was Charlie, the bride's son. The bride and grooms' daughter Sunny-Ann served as the flower girl.

The couple took their honeymoon in Lake Placid.