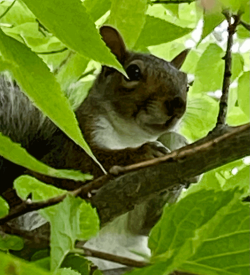 This squirrel climbed up a tree at Ives Park in Potsdam with an acorn. 'My granddaughter, Birdie Rose Gerrish, kept her eye on him,' said Rose Stone, who submitted the photo. 'It didn’t seem to be afraid ... is this a sign of a harsh winter?

Just the Other Day

It is embarrassingly late (but hopefully better late than never) to express my gratitude to the nurses and doctors at Canton-Potsdam Hospital who cared for my brother David Burnett...

On November 2 Canton will elect a Town Supervisor and three Town Council members, and I urge you to vote for Supervisor Mary Ann Ashley and Councilors JIm Smith, Dave Nelson...

I am writing to express my support for Andrew Moses, candidate for St. Lawrence County Family Court Judge, in the upcoming election.

Mr. Moses has been a respected,...

I am writing to you today on behalf of Heidi Smith. She is without a doubt qualified to be Canton’s Town Clerk. It was my pleasure to mentor Heidi prior to my retirement...

Local government needs people who know the challenges our community members are facing, and who are willing to dedicate their time to addressing these challenges. I am...

Interesting; the Sensible People Party “an independent party composed of voters who believe that the interests of St. Lawrence County are best served by cooperative efforts...

I am writing today to introduce myself to the voters of the Town of Brasher. My name is Andrew Gray and I am seeking the position of Highway Superintendent for Brasher this...

We are looking forward to Nov. 2. On that day, we will be delighted to cast our votes for Lynn Hall for Potsdam town council.

We met Lynn and her husband Kevin soon...

In November 2020, millions of voters like me went to the polls and cast a ballot for Joe Biden.

Now, with a relentless GOP attack on our voting rights underway, I’m...

Opinion: League of Women Voters says get out and vote in general election

The 2021 General Election is almost upon us. The early voting period is Oc. 23-31 and Election Day is Nov. 2. Early voting will be in a new place this year: the Clarkson...

McAuliffe will do great as town supervisor, Canton man says

Voting time is here again and the people of Canton have a very important position to fill, “Town Supervisor”.

Karen McAuliffe is running for that position and I...

As we head into the November elections, Canton...

The Hepburn Library of Lisbon has been recognized by the North Country Library System (NCLS) with the 2021 Library Improvement Award. This is what NCLS had to say:

Please consider electing John Taillon for Canton Town Council. I have known John since 1974 when I moved to Canton. We spent a lot of time playing baseball with all of our...

We understand President Biden is busy. Between foreign policy crises, infrastructure, and the COVID-19 pandemic, he has a lot on his hands.

But I can’t help thinking...

Opinion: Whatever your party affiliation, elect my husband to Canton Town Council

My husband loves his family, his community, and his country. He is running for Canton Town Council on the Republican and Conservative lines of the ballot. He is married to me...

I am writing in support of Karen McAuliffe for the position of Canton Town Supervisor. Along with many other concerned citizens, I have become troubled over decisions and...

I am writing in support of Larry Hewlett for Town of Brasher Highway Superintendent.

Larry submits a detailed budget to the board and has lowered the highway tax rate...

Please consider electing Mr. Kevin Liddell as the next Supervisor for the Town of Waddington. Since returning to Waddington with his family some 13 years ago, I have had the...

I am writing this to endorse Kevin Liddell for the office of Supervisor of the Town of Waddington. I am Kevin’s uncle so I have known him his entire life.

In keeping with the tone of Andrew Moses and his campaign for family court Judge, I will not say anything of a negative nature about his opponent.

I am writing to ask Canton voters to support John Taillon for Canton Town Council and give him your vote on election day. I have known John personally for well over 50 years...

The Village of Rensselaer Falls is the epitome of what we love about Northern New York. Drive into town and you immediately feel at home, as if you've grown up here in a...

Consider how different our country would be if every program the Republicans have opposed had never come to pass.

There would be no Woodrow Wilson’s 1916 National...

Opinion: Suck it up, get the shot and save your job, says Morristown man

I’m thankful that Governor Hochul, like President Biden, is instituting COVID-19 vaccine mandates wherever possible. Ultimately, the more Americans who get vaccinated, the...

This November we citizens in the Town of Canton have an opportunity to retain an exceptional individual on our Town Board.

I am writing to encourage Canton voters to elect Mary Ann Ashley, Martha Foley-Smith, Jim Smith, and Dave Nelson, to new terms on the Town Board.

Who has worked many consecutive years in St. Lawrence County to help children in the county court system?

Who has show compassion in dealing with child abuse, and...

Opinion: Ogdensburg couple alarmed by letter about cuts to DPW

We are quite alarmed at a recent editorial letter in The Ogdensburg Journal on 10-07-2021 by Ron Bouchard in an attempt to use a letter we submitted at an earlier date to...

My name is Patti Bartlett, and I am running as a write-in candidate for the Lisbon Town Board.

My family and I are lifelong residents of Lisbon, so I am familiar with...

My name is Kyle White and I am asking for your support in my run for a town council seat in Massena. This is my first time running for office, but I am young and have the...

First I want say that Mr. Moses does not know that I am writing this letter. I have talked with both candidates in the past and I think that the best choice for Family Court...

I am writing to express my support for David Nelson as a candidate for the Canton Town Board.

I have known Dave for several years. He has always been responsive,...

I feel fortunate to live in a community with so many outdoor, live music events. This summer and fall, I have really enjoyed concerts at the Norwood Village Green, Waddington...

As many people know, I recently sued the Village of Potsdam over the doubling of water-sewer charges for apartments. But before I did, I met with the mayor and administrator...

On September 25th and 26th the Norwood Model Railroad Club held its 12th Annual Model Train, Toy and Collectable Expo in the Massena Arena. It was again a very successful...

We are just weeks away from local elections in the city and I will be voting for two Republican candidates that represent fresh leadership in the community; Esbon "E.J."...

I am writing this letter in support of John Taillon for Canton Town Council. I got to know John when I was Branch Manager of the Canton SeaComm and he was Parks and...

I am writing to express my support for Heidi Smith as our next Canton Town Clerk. Her great work ethic, pleasant personality and knowledge of the tasks required, make Heidi...

Please consider voting for Martha Foley Smith in November for Canton Town Council. Martha is a long time neighbor and friend but beyond that we think she has been doing a...

The results of the 2020 City Financial Audit is verifiable proof positive that the bold decisions by the Majority City Council are achieving the desired results. If you are a...

Opinion: McAuliffe has 'can do' attitude to serve as Canton Town Supervisor

I have worked very closely with Karen during her several years that she has served our community as a Licensed Real Estate agent for County Seat Realty in Canton, NY. Her...

In Moses’ latest letter, he pleads for honesty in the Family Court Judge race. When called out previously, Moses confessed that he couldn’t actually practice in Federal or...

I have known John Taillon for over 50 years as we grew up in the same neighborhood. John is a huge sports fan and a fierce competitor, as demonstrated through the many years...

Being a Family Court Judge is a tough job under the best of circumstances. It is particularly difficult here in St. Lawrence County given the issues that so many of our...

It is my pleasure to recommend Kyle White as a candidate for the Massena Town Council.

Kyle has all the traits that our local government needs. He is young, energetic...

I am writing this letter in support of John Taillon for Canton Town Council.

I am the retired Head of Maintenance for the Canton Recreation Department and worked with...

I am proud to support Alex Lesyk for St. Lawrence County Family Court Judge. Alex is a graduate of Fordham University Law school and completed his undergraduate work at...

I appreciate this opportunity to share my decision to run for Canton Town Supervisor.

There are areas in town government that I believe could use improvement and with...

October is Breast Cancer Awareness Month and the Cancer Prevention in Action Program is encouraging employers to help employees stay up to date with cancer screening, like...

I am writing to encourage Canton voters to elect Mary Ann Ashley, Martha Foley-Smith, Jim Smith, and Dave Nelson, to new terms on the Town Board.

Opinion: Use of buzzwords in opinion pieces is based on emotion, says Norwood resident

Hello to people who contribute to the opinion section of this website/newspaper. I feel the need to preface this by pointing out that “science” is not a set of beliefs; but...

Why was the Canton Town office closed?

There should be a town officials available to man the office at all times during regular, scheduled business hours.

I wish I had not read the story this morning of the 10 year old little girl with cerebral palsy dying a horrific death of repeated neglect and abuse in Massena last year. No...

View All Letters to the Editor